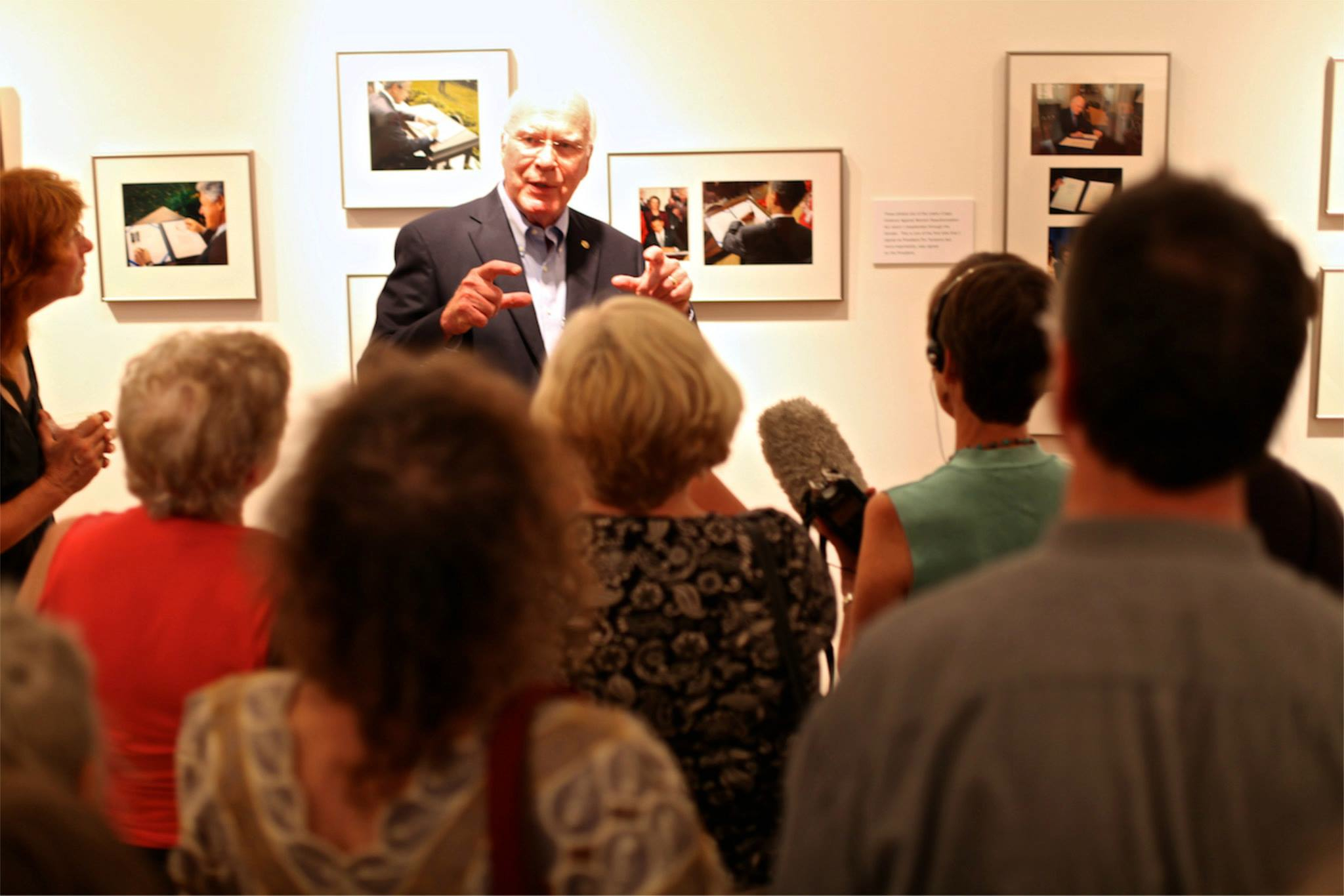 ST. JOHNSBURY, Vt. Born mostly blind in one eye, Sen. Patrick Leahy, D-Vt., realized early on there were two hobbies he could hope to truly master: target shooting and photography.

He checked off the former in college, weighing in as a champion marksman at St. Michael's in Vermont. But since arriving in Washington in 1975 - and enviously spying former GOP leader Howard Baker snapping pictures during his first meeting with then-President Gerald Ford - he's become far more recognized as the senator with a camera forever fused to his hand, who "hovers and cranes over" historic events while his colleagues step back to take it in.

"I've often joked that if I could do whatever I wanted to do, it'd be a photographer full-time," Leahy - the most senior senator on Capitol Hill and third in the line of presidential succession - told CBSNews.com. "But I make it as close to full-time as possible. I always have a camera."

Earlier this month, Leahy was guest of honor at the kickoff reception for his 11th public photo exhibition, which has been four years in the making. The Catamount Film and Arts Center, in St. Johnsbury, Vt. - the heart of the so-called "Northeast Kingdom," where his wife and mother were both born - will show 52 of his favorite photographs through Sept. 2.

Choosing the photos to include, Leahy said, simply came down to the ones that "tell a story."

And he's got plenty of stories to tell, many including casual references to his "good friends" - like Bono and the Dalai Lama. "Just some memories from a few years in the Senate," he said in concluding his show opening.

Leahy's access and artistic "eye" allow for a gallery that's both impossibly exclusive and professionally composed.

Lighthearted fare in Leahy's exhibition ranges from George H.W. Bush in a happy hour-inspired Goofy hat, to a drunken Boris Yeltsin toppling Bill Clinton, to a missed opportunity to photograph Pope John Paul II: "He waved again like, 'OK dummy, get it this time,"' Leahy narrated at the opening. And Ronald Reagan autographed Leahy's now-iconic picture of his 1985 swearing-in: "I cannot believe my favorite photograph was taken by a Democrat - Ron."

Other staples in Leahy's collection, though, extend beyond anecdotes of backstage political theater and offer up poignant accounts of people he met in his worldwide travels.

One that Leahy describes as a "moving ... personal favorite" shows a legless Vietnam veteran who pulled him in and kissed him after he lifted the crippled man onto a wheelchair backed by the Leahy War Victims fund. Another captures a Tibetan man, hugging his young son and flourishing a picture of the Dalai Lama in 1988 - a time when he easily could have been arrested for doing so.

Still some, Leahy says, remind him of why he got into public service in the first place. What he calls his "conscience picture," hanging above his desk - Bono also has a copy - is of a single man at a refugee camp in El Salvador: "He's looking me right in the eye," Leahy said. "And it's as though he's saying, 'Rich and powerful people can talk to you. What are you doing for somebody like me?"'

With Lawrence Jackson, a White House photographer, as a son-in-law, Leahy and his wife, Marcelle, "have the most documented grandchildren in the world," he said. But his favorite photography subject is "still Vermont - and I'm not just saying that."

As chairman of the Senate Judiciary Committee - which for months has been nagged by partisan gridlock on immigration - Leahy says it's good to have an outlet, if not just "for the memories."

"If you think back in history, what do you remember?" he asked. "The first step onto the moon. John F. Kennedy, Jr. saluting his father's casket going by. How the Hindenburg - I don't know where it was coming from or anything else about it - but I remember that picture of it bursting into flame. It's the photographs that you remember."