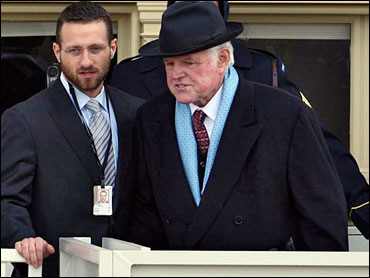 (AP Photo/Ron Edmonds)
Sen. Ted Kennedy, who has been battling a malignant brain tumor, collapsed at a luncheon this afternoon at the U.S. Capitol's Statuary Hall.

"Senator Edward Kennedy experienced a seizure today while attending a luncheon for President Barack Obama in the U.S. Capitol," Dr. Edward Aulisi, Chairman of Neurosurgery at Washington Hospital Center, said in a statement. "After testing, we believe the incident was brought on by simple fatigue."

"He was shaking, convulsing," a Senate official who witnessed the events from the overhead catwalk said, according to the pool reporter. "A woman was holding him. They lowered him into a wheelchair and he was still seizing. He was shaking." 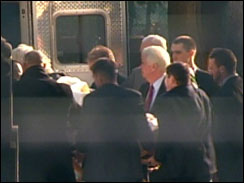 (CBS)
Sen. Chris Dodd, who was talking to Kennedy when he got into the ambulance, suggested the senator would be OK.

"He sounded good and strong as he got into that ambulance," Dodd told CBS News' Jeff Greenfield. He predicted that Kennedy would soon be back on the Hill fighting for health care.

In his statement, Aulisi said Kennedy "is awake, talking with family and friends, and feeling well."

Kennedy's wife Vicky and son Patrick are with him, reports CBS News' Kimberly Dozier, who spoke to a hospital spokesperson.

President Obama has called to check in on the senator, though it is unclear if the two spoke.

Sen. Jay Rockefeller told reporters that Mr. Obama noticed Kennedy becoming ill and rushed over to his table at the luncheon, according to the Associated Press.

Teresa Heinz Kerry reportedly assisted Kennedy during the convulsions. The senator was wheeled out of the Hall for medical attention on a stretcher. Sens. Orrin Hatch and John Kerry accompanied Kennedy to the ambulance.

Kerry later visited Kennedy at the hospital and told reporters that the senator is in "good shape" following a "mild seizure," CBS News' Joy Lin reports.

He said Kennedy "joked a little bit about what happened" and is grateful for the telephone calls he's received.

Kerry also said this is something Kennedy has undergone before and that it "goes with the territory" of having Kennedy's form of cancer.

A source who was in the room told CBS News' Marc Ambinder that Kennedy suffered through about two minutes worth of convulsions.

That source and another said the ambulance that was assigned to the presidential motorcade was the one that took him to Washington Hospital Center. 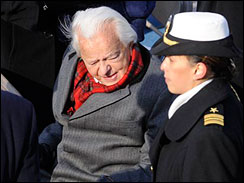 (AP Photo/Susan Walsh)
Sen. Robert Byrd, overcome with emotion, had to be taken from the hall in a wheelchair after the incident. The 91-year-old Byrd is "doing fine," Byrd spokesman Mark Ferrell, but remains concerned about Kennedy, his longtime friend.

At the Congressional luncheon, President Obama brought up Kennedy's situation and paid tribute to him.

"He was there when the Voting Rights act passed, along with John Lewis, was a warrior for justice," a subdued Mr. Obama said. "And so I would be lying to you if I did not say that right now, a part of me is with him. And I think that's true for all of us. This is a joyous time, but it's also a sobering time. And my prayers are with him and his family and Vicky."

"He is beloved by Republicans and Democrats," Schieffer said. "He's just popular. People just like him. And they always have. And so that's why Barack Obama was clearly shaken when we saw him get up to make that talk. But he was not the only one in the room [to whom] this was a real blow."

Kennedy will remain at the Washington Hospital Center overnight for observation, and will be released in the morning, Aulisi said.