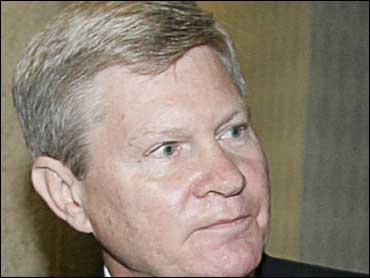 Weeks after suffering a brain hemorrhage, Sen. Tim Johnson is improving but still needs a ventilator at night to help him breathe, his doctor said Wednesday.

In the most detailed update yet on Johnson's condition, his doctor said a test Wednesday revealed no evidence the tangled arteries that triggered the senator's stroke remain. "This angiogram shows that there is no further surgery needed at this time," Dr. Vivek Deshmukh said in a statement released by Johnson's office.

The doctor said Johnson no longer needs a ventilator full time. "His breathing has steadily improved and now he only requires ventilator assistance at night," said Deshmukh, the neurosurgeon treating the senator.

The ventilator requires a tube to be placed down Johnson's throat, making it impossible for him to even attempt to talk.

Johnson, who turned 60 last week, had emergency surgery last month to correct a condition called arteriovenous malformation. He underwent the angiogram Wednesday at George Washington University Hospital, where he has been in critical condition since Dec. 13.

His long-term prognosis is unclear. Deshmukh said his recovery is expected to take several months.

The senator "continues to be responsive to both his family and physicians — following commands, squeezing his wife's hand, and understanding speech," Deshmukh said.

The statement said his overall medical condition has improved steadily. "The next phase of his recovery is expected to take several months and focus upon rehabilitation and physical therapy," according to the statement.

The senator's sudden illness raised questions about the Democrats' one-vote majority in the upcoming Senate session. South Dakota's Republican governor, Mike Rounds, would appoint a replacement if Johnson's seat were vacated by his death or resignation.

A Republican appointee would create a 50-50 tie and effectively allow the GOP to regain Senate control because of Vice President Dick Cheney's tie-breaking vote.

Johnson has not spoken since the surgery because of the ventilator tubes, said spokeswoman Julianne Fisher. Doctors hope to remove the ventilator completely within the next week and then will test his speech, she said.

The senator was sedated for almost two weeks but has now been removed from the sedation, Fisher said.

"He does more, he has been moving more. These are all very positive signs," she said.

Johnson's doctors have said that when he arrived at the hospital, he was feeling weakness on his right side, and that condition probably will require physical therapy.

Johnson's wife, Barbara, said she is pleased with the results of the test and that her husband will be back at work "as soon as he can be." The senator will miss the opening days of the Senate this week.

"Tim has had some challenging days since surgery, but step by step, he's been making great progress," Barbara Johnson said. "We know there is a long road in front of us, but Tim's determination will make all the difference."

Johnson was diagnosed with the arteriovenous malformation, a condition, often present from birth, that causes arteries and veins to grow abnormally large, become tangled and sometimes burst. He was rushed to the hospital after becoming disoriented on a phone call with reporters and had surgery hours later.