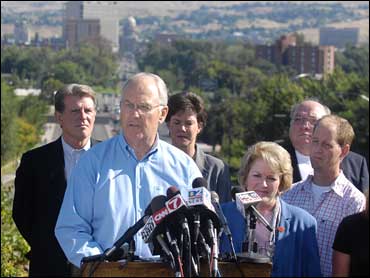 Sen. Larry Craig filed court papers Monday seeking to withdraw his guilty plea in an airport sex sting, arguing that he entered the plea under stress caused by media inquiries into his sexuality.

Craig, an Idaho Republican, pleaded guilty in August to disorderly conduct following his June arrest in a sting operation in a men's bathroom at the Minneapolis airport. A police report alleged that Craig had solicited sex from a male officer at the airport, which the senator has denied.

In a "state of intense anxiety" following his arrest, Craig "felt compelled to grasp the lifeline offered to him by the police officer" and plead guilty to the disorderly conduct charge in hopes the matter would not be made public, said the court papers filed in Hennepin County District Court.

The filing said Craig panicked and accepted the plea rather than seeking the advice of an attorney. As a result, Craig's guilty plea was not "knowingly and understandingly made," and the evidence against him insufficient to support the plea, the papers said.

When his guilty plea became public, Craig came under intense pressure from Senate Republican leaders and other colleagues in Washington to resign. He first announced he would resign Sept. 30, then said he was reconsidering that decision. A spokesman later said Craig had dropped virtually all notions of trying to finish his third term, unless a court moves quickly to overturn the conviction, unlikely before the end of the month.

Patrick Hogan, a spokesman for the Metropolitan Airports Commission, which runs the airport and handled the prosecution of the case, said the prosecutor will oppose Craig's motion.

Craig's three-page guilty plea includes acknowledgments that, "I understand that the court will not accept a plea of guilty from anyone who claims to be innocent," "I now make no claim that I am innocent...," and, "I did the following: Engaged in conduct which I knew or should have known tended to arouse alarm or resentment ... ." Craig signed the bottom of each page.

Craig was sentenced to pay $575 in fines and fees and was put on unsupervised probation for a year, with a stayed 10-day jail sentence.

To reverse his guilty plea Craig would have to convince a judge that there was a "manifest injustice" in case. Often that includes sentences that were harsher than the one anticipated in the plea bargain, but that didn't happen in Craig's case. Legal experts have said such motions are rarely brought, and when they are they are rarely successful.

Motions to withdraw a guilty plea are usually heard by the same judge who heard the original case, usually at least two weeks after they're requested, court officials have said.

In exchange for Craig's plea, the prosecutor dropped a gross misdemeanor charge of interference to privacy. If he is allowed to withdraw his guilty plea, the prosecutor would have the option to re-file the dropped gross misdemeanor interference with privacy charge, which stemmed from an allegation that Craig peered into the bathroom stall occupied by the undercover police officer.

A conviction on that gross misdemeanor charge could bring a jail sentence of up to a year, although it would be unusual for a defendant to receive the maximum sentence.

Many Republicans have urged Craig to say for sure that he will resign. That would spare the party an ethics dilemma and the embarrassment of dealing with a colleague who had been stripped of his committee leadership posts. It also would negate the need for a Senate ethics committee investigation, which GOP leaders had requested.