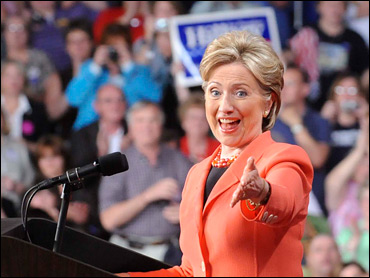 If the Democratic presidential race were a runaway, if Barack Obama were, say, 1,500 delegates ahead of Hillary Clinton, then there would likely not be so many anguished cries for Clinton to quit the race.

Just look at 1992. Bill Clinton is fond of saying he didn't wrap up the Democratic nomination until June 2 of that year, when he won the California primary. That's technically true, but Clinton was the clear winner long before that. Nevertheless, former California Gov. Jerry Brown stubbornly stayed in the race, even though going into June 2, he had 388 delegates to Clinton's 2,059. (Clinton's total was, at the time, 86 short of locking up the nomination.)

Brown hadn't been taken seriously since losing the New York primary on April 7, but he kept at it. His campaign became so quixotic that in late May, during a visit to an elementary school in South Central Los Angeles, a nine year-old asked him, "What do you plan to do to get more delegates to win this campaign?" "That's a very good question," Brown answered, according to an Associated Press report. "What do you think we should do?"

There was no good answer, but who cared? Brown could stay in as long as he liked because his presence didn't really matter. But Hillary Clinton's campaign, which is not only not 1,500 delegates behind Barack Obama but might, by some reckoning, catch up with him in the popular vote total - and in any event remains excruciatingly close to Obama in all measures - is different. Obama's supporters, in the campaign, in the Democratic party, and in the press are desperate for her to leave the race precisely because her support is so substantial; her continued presence is a daily reminder of how profoundly divided the party is at this moment.

Her landslide 67-26 victory over Obama in West Virginia - she won by 147,410 votes - won't change that situation. The oft-repeated fact that no Democrat since 1916 has won the White House without winning West Virginia won't change it, either. But together, those two facts show just how far Democrats have ventured into uncharted territory this year. If Obama is to win the White House, he'll have to do it in a brand-new way, winning states that Democrats haven't won lately with diminished support in states that have been important to Democratic victories in the past. Clinton's campaign reminds Democrats of that, and it makes some of them nervous.

It's no wonder Obama didn't give a speech last night. But Clinton did, and she made it clear that the Democrats who are just dying for her to leave the race will have to just die for a while longer.

"Now, there are some who have wanted to cut this race short," she told supporters in Charleston. "They say, 'Give up. It's too hard. The mountain is too high.' But here in West Virginia, you know a thing or two about rough roads to the top of the mountain. . . . I am more determined than ever to carry on this campaign until everyone has had a chance to make their voices heard."

Clinton repeated her insistence that delegates from Florida and Michigan - "all of their delegates" - be seated. "I believe we should honor the votes cast by 2.3 million people in those states," she said. Her demand was pooh-poohed in some circles of the commentariat, but the question for Democrats is: Why is that such a radioactive proposition? This is the party that got rather excited over 537 votes in Florida in 2000, the party that would like to pass something called the Count Every Vote Act, the party that has consistently favored greater enfranchisement over stricter enforcement of the rules (and sometimes the law). Sure, Clinton wants to change the agreement that existed going in to Florida and Michigan, but circumstances have changed, too. Since when have Democrats been such sticklers for unbending rules? Why do so many in the party insist that millions of votes in two key states be counted only if they don't matter - that is, if the result is a fait accompli - and not be counted if they do?

If they were counted now - even if some of them were counted now - things might be quite different. According to the Real Clear Politics total, when one includes estimated vote totals in caucus states (a factor which favors Obama) plus results from Florida (which favor Clinton), but nothing from Michigan, where Obama's name was not on the ballot, Obama's lead in the national popular vote is 411,915. That figure is less than Obama's margin of victory in his home of Cook County, Illinois, where, according to the Illinois Board of Elections, Obama won by 429,052 votes. By other counts, Obama's lead is far less than his winning margin in Cook County. In other words, take away Cook County and Obama is the loser in the national popular vote race. He's the president of Chicago.

Nevertheless, the Obama steamroller goes on. "This race, I believe, is over," former Democratic party chairman - and Clinton supporter - Roy Romer told reporters on an Obama conference call Tuesday morning. "It is time for the party to unify, to get beyond the primary season, and to begin the general election." His words echo those of dozens of top party figures in recent weeks. But they haven't quite answered Hillary Clinton's fundamental question: Why?
By Byron York
Reprinted with permission from National Review Online