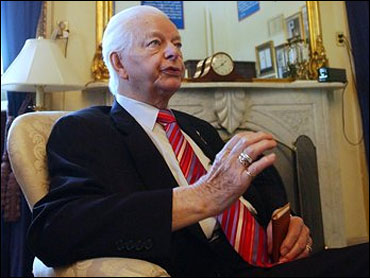 Dwight Eisenhower was president when Robert Byrd was first elected to the Senate from West Virginia.

Slowed by age and grief-stricken over the recent death of Erma, his wife of almost 69 years, Byrd is running for an unprecedented ninth term. At 88, he uses two canes as he slowly makes his way around the Capitol. Yet he can thunder orations from the Senate floor.

"I can speak with fire because my convictions run deep," Byrd said in an hour-long interview in his Capitol office. "I'm not just an ordinary senator. I know it and you know it."

That uncharacteristic bit of immodesty came shortly after Byrd was asked whether he will be able to complete a full six-year term that would end when he is 95. When asked about his age and his stamina, Byrd bristles.

"Age has nothing to do with it except as it might affect one's strength, endurance and stamina. Age does not affect me except in my legs," Byrd said. "And I've got a head up here that hasn't changed one iota in the last 25 years."

Byrd's record service in the Senate surpasses that of Sen. Strom Thurmond, who represented South Carolina for 48 years until retiring in 2002 and died the following year at age 100.

As Byrd prepares for his latest re-election bid, some of his support is coming from unlikely sources: Internet-based groups such as MoveOn.org, whose members contributed more than $800,000 to Byrd in less than three days during a fundraising blitz last year.

Byrd's unlikely rise as a darling of the liberal blogosphere came after he came out strongly against the war in Iraq. While prominent Senate Democrats such as 2004 presidential nominee John Kerry of Massachusetts and Hillary Clinton of New York voted to authorize the war, Byrd stood firm in opposition.

Now that public opinion on the war has shifted, Byrd feels gratified.

"The people are becoming more and more aware that we were hoodwinked, that the leaders of this country misrepresented or exaggerated the necessity for invading Iraq," Byrd said.

As for President Bush, Byrd was originally impressed with the Republican. Not anymore. Tax cuts have drained the Treasury and the war is costing lives and money for domestic priorities.

"History still must render a verdict on him," Byrd said of Bush. "He started with great promise, I thought. I had great hopes for him. I liked the way he seemed to be humble, down to Earth. As time went on, of course, in my judgment he did not bear out my early hopes. I'll leave it at that."

Byrd's improbable rise began in the coalfields of West Virginia. The adopted son of a miner, he grew up as poor as any American politician, living in a house without electricity, running water or indoor plumbing. His rise to the upper echelons of U.S. politics began in 1946 when, as a fiddle-playing butcher, he won a seat in the state's House of Delegates.

Within 12 years, Byrd had made his way through the West Virginia Senate and the U.S. House. He won election to the Senate in 1958. Dwight Eisenhower was president and it was a year after the Soviet Union beat the U.S. into space with Sputnik.

Eschewing the limelight to focus on the nuts and bolts of Senate business, Byrd focused on little details that made his colleagues' lives easier: arranging times for votes and colleagues' floor speeches, and making sure their amendments got votes. He became majority leader - the Senate's top post - in 1977.

He admits to a few errors along the way.

Byrd participated in an unsuccessful filibuster of the 1964 Civil Rights Act. As a young man, he join the Ku Klux Klan, a mistake he has been saddled with since the early 1940's.

Byrd is a senator from another era. In an age where politics has long since been dominated by soundbites and snappy visuals, he cites Roman history, quotes from the Bible and reads poetry in his Senate speeches.

While Byrd holds the Senate and its rules in reverence, he says it has seen much better days. Partisan politics is now everything. Raising campaign cash is too time-consuming. Workweeks are usually kept short, with votes on Fridays a rarity.

Today's senators would be left gasping at the paces Byrd put the Senate through when he ran it – as Senate Majority Leader (1977-80, 1987-88) and as Senate Minority Leader (1981-86). Monday through Friday workweeks. Late-night votes. Fewer recesses. Byrd himself used to hold his weekly news conferences on Saturdays.

"I ran the Senate like a stern parent," Byrd wrote in his memoir published last year, "Child of the Appalachian Coalfields."

Byrd has been a political institution in West Virginia for as long as anybody can remember. He has run 14 times and never lost. His latest opponent, Republican John Raese, is well behind in the polls.

Still, Byrd's taking no chances, having raised more than $3.8 million, far more that any previous campaign.