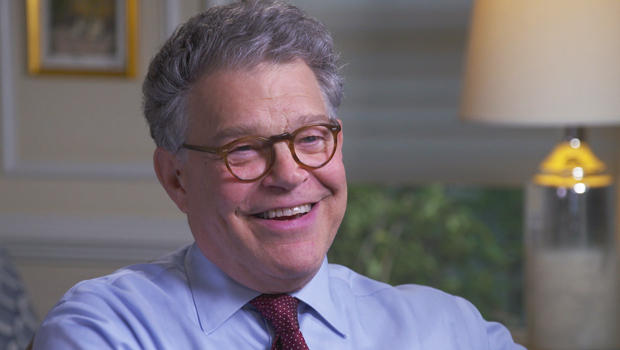 Democratic Sen. Al Franken's political career is no laughing matter. Still, his comic beginnings have impacted his job as U.S. senator in many ways.

Franken recalled his harrowing entry into national politics in the 2008 race for a Minnesota seat in the U.S. Senate. His opponent, incumbent Sen. Norm Coleman, "weaponized [his] humor," putting every joke he told through the "de-humorizer," as Franken called it. Coleman "stripped" every bit of context and irony out of his jokes, Franken said, but in that race, the former "Saturday Night Live" star managed to eke out a hard-fought victory of merely 312 votes.

Even though he won, the race caused him to re-examine his approach to politics.

"Basically because my career as a comedian and comedy writer had been used against me so effectively, I said, 'Well I have to not be funny for the first 20 years in the Senate,'" Franken said over poached eggs and a coffee.

"It turned out, it only was six. And then I won re-election by a very comfortable margin," he said. "So I let myself be a little funny."

Franken also addressed issues of the day with Garrett and Chaggaris, including Republicans' approach to health care overhaul.

"I don't think they counted on winning in the fall and… they just said, 'Okay, good, we'll have another four years to use [Obamacare] as a whipping post or whipping boy," Franken said. "And uh oh, November 8th happens and now we've got to come up with something.'"

He explained why the issue of climate change has a particularly important place in his heart and how his family is a driving force in his attempts to bring it to the forefront of national political discourse.

"I have three grandchildren and, you know, in 50 years I don't want them saying to me, 'Grandpa, you were a United States Senator, you knew climate change was happening, why you didn't do anything?'" he said with a pause. "'And also, why are you still alive?...' Because I would be 116."

Oh, and one thing Franken wants Americans to know about comedians: "Very often," he said, "they are smart."

For more from Major and Steve's conversation with Rep. Seth Moulton about President Trump's new plan for transgender service members and reflections of his own service in Iraq, download this week's podcast on iTunes, Stitcher, Google Play, or Spotify. Also, you can watch this week's episode on CBSN Friday andSaturday nights at 9pm ET/PT. New episodes are available via podcast everyFriday morning.

Simone Biles among next Presidential Medal of Freedom recipients
Thanks for reading CBS NEWS.
Create your free account or log in
for more features.
View CBS News In
CBS News App Open
Chrome Safari Continue
Be the first to know
Get browser notifications for breaking news, live events, and exclusive reporting.