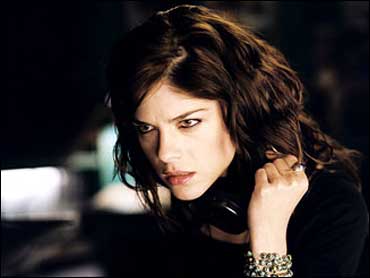 Rising young Hollywood actress Selma Blair stars in an updated version of "The Fog," taking the role created by Adrienne Barbeau as the single mom and disc jockey of the local radio station in the small town of Antonio Bay.

"It's a sleepy, wonderful, idyllic town but there's a curse on it from 100 years ago," Blair said. "The people who died in this kind of boating accident have come back to take their revenge."

"I saw it right before I went into the audition," Blair told The Early Show co-anchor Rene Syler. "I cannot believe I got the part because I'm really not one who understands these slasher '80s horror movies. I have more of a 'Rosemary's Baby' mentality. I get scared. I don't know. God, what's the story here? They're like, great, you're hired.

"Really, I don't know how I did it. But I am happy I got the part. It's a ghost story. It's fun to go to the movies and be scared. I've never done anything like this. It's fun to play mom. Last I knew I was playing a 17-year-old who graduated."

The film also stars Tom Welling of "Smallville." And next to her husband, Ahmet Zappa, son of the late Frank Zappa, Blair said Welling is "crazy looking. And not some little pretty boy. He's 6 foot 4, gorgeous."

"I have a one tiny scene with him," she says. "It's just meant to be a casual thing. He was so gorgeous that for 30 seconds I look like the creepiest girl. I mean, not a blink. I ruined my chance of ever having a scene with anyone ever again."

And just like she got the part for "The Fog," by chance, she got to meet and marry the man in her life.

"I had been kind of blue, after a previous relationship years ago," she said. "And I was really kind of not ready to get into another one. A friend said, 'You spend too much time alone at home. Get out, date. I have the guy for you. You're going to marry him.' I said, 'I don't want to get married. And Amanda said, 'Just meet him. He's so funny.' After a couple months, we finally met. He was late. I was cursing him out.

"Again, like my audition for the 'The Fog,' it went badly and it turned out. Eight days later, I jokingly asked him to marry me at my best friend's house. I said, 'Oh, no, just kidding.' And then he asked me out in the car later that night when we were going home.

"I didn't know if he was serious. I said, 'I need something, a token.' He gave me a highlighter and wrote all over my arm sweet things. And later I found out that Frank asked his mother to marry him in the same way."