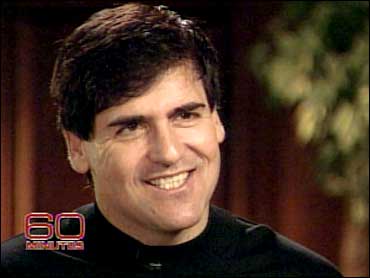 He's a self-made billionaire -- one of the few who launched a dotcom and walked away with his fortune.

It wasn't luck. Mark Cuban has always had a knack for being one step ahead of the latest technology.

He made his first millions in personal computers, and saw the potential of the Internet long before most of us even knew what it was. Now he hopes to change television, as we know it.

It's an impressive list of achievements, especially for someone who gets most of his publicity on the sports page as the crazed, out-of-control owner of the National Basketball Association's Dallas Mavericks. Correspondent Steve Kroft reports.

The NBA has fined Cuban more than a million dollars for bad behaviors – mostly taunting referees.

"I'm passionate. There's no question about it," says Cuban.

"I don't sell basketball," says Cuban. "We sell sore throats, we sell smiles, we sell the look on your son's or daughter's face when they're standing up and screaming and yelling."

Cuban has always been the consummate salesman, even while growing up in a blue-collar neighborhood near Pittsburgh.

What was his first business venture?

"Selling garbage bags door to door. I mean, who's gonna say no to a 12-year-old kid selling garbage bags?" says Cuban. "When I was in high school, I was the short, fat kid that was into business. It wasn't like I had hot dates, or I could get a date. I had to beg for a prom date basically."

So how many businesses did he have when he was in high school?

"That I ran that were just me? I don't know, I never counted," says Cuban, laughing. "There were probably four or five adventures."

Those "adventures" helped Cuban pay for his first year at Indiana University, where he set out to get a degree in business, using one money-making scheme after another.

"I gave disco lessons to sorority houses for $25 an hour. Back then, that was, still is, a lot of money. And then, I paid for school with a chain letter and I would wake up in the morning, go to my mailbox and there would be checks there. And that's how I paid for my junior year," says Cuban. "Just like the stock market today, you know?"

He moved to Dallas in the early '80s, and landed a job selling personal computers when only a few people had them.

Did he know anything about computers?

"Not a darn thing. But that wasn't going to stop me. I would just stay up all night and read the manuals and teach myself and basically that's how I got started," says Cuban. "I was the No. 1 salesperson and did a good job, I thought … well, then I got fired."

After convincing one of his customers to loan him $500, Cuban launched Micro Solutions, a computer-consulting firm he later sold to CompuServe for $6 million.

"I ended up making about $2.2 million. I bought a lifetime pass on American Airlines and I just started traveling," says Cuban. "If you would have asked me what my occupation was the day after that, it was retired. I turned 31 the day after we sold it."

His retirement lasted five years. Then, in 1995, an old college buddy, Todd Wagner, came up with an idea that sent him back to work.

"He said, 'Look, I've got this idea where I think we can listen to Indiana basketball, sporting events, anywhere in the world by using the Internet,'" recalls Cuban. "We went out and bought a $3,000 Packard Bell computer. And in the second bedroom of my house, hooked up some software and started this little company called Audio Net, and had no idea what it would turn into."

What it turned into was Broadcast.com. Before long, they were transmitting programs from hundreds of radio and television stations over the Internet. At the height of the dotcom frenzy, Yahoo! made Cuban an offer he couldn't refuse.

He had a company with $15 million in revenue. A year later, it sold for $5.7 billion in Yahoo! stock. "Just as shocking to me even now as it was then," says Cuban, laughing.

More than 300 employees also became millionaires - at least on paper. But Cuban, sensing the Internet bubble was about to burst, made his shrewdest move. He began unloading his Yahoo! stock, using a hedging strategy that would lock in his profits.

His first acquisition was a $41 million Gulfstream V, which he bought on the Internet.

Next, he bought a 24,000-square-foot bachelor pad that was big enough to hold his own sporting events with friends. The chandeliered ballroom doubles as the wiffle-ball room.

But Cuban had one more thing on his wish list. He was a self-proclaimed basketball junkie, and $285 million later, he became the proud owner of the Dallas Mavericks - the worst basketball team in the NBA.

Now, at 45, he is living out his fantasy. And the best part of being a billionaire, he says, is shooting hoops with NBA stars in his own arena – even though a lot of people thought he was too goofy to be an NBA owner.

Terdema Ussery had been the CEO of the Dallas Mavericks for four years when he got the word that his new billionaire boss wanted to talk to him over dinner.

"I didn't eat all day, and put on my best suit, my best shirt and tie and knocked on the door of this really beautiful home. And he opened it up with no shoes on, in his Levis, and invited me in," says Ussery. "Dinner ended up being you know, some Doritos and some Cocoa Puffs and a couple of bottled waters. He's not into titles. He's not into hierarchy. He's not into the trappings of … you've seen our offices."

Their offices are located in a refurbished warehouse on the edge of downtown Dallas, where more than 100 employees are jammed into cubicles. It definitely has no frills.

"What do you need frills for?" asks Cuban.

The hours are long, the pay is low, and Cuban expects results -- not excuses.

"It's a fun industry. I mean, they're younger. They don't know any better. No, I mean…It's a sweatshop here and we're proud of it," says Cuban. "You can't see the chains attached to their ankle, but … the reality is there's just so much competition for the jobs."

Turnover is almost non-existent. And many of these people have worked for Cuban for years. His old friend, George Prokos, was one of the first people that Cuban hired. He's a vice president, but does he get a bigger cubicle?

"That means I get a double wide, a corner double wide with a window. Panoramic view," says Prokos, adding that the first thing Cuban told him when he first came to work as a sales manager was: "I don't care if you have to hire 18,147 salespeople. I want that building sold out every night."

And, he says, Cuban allowed him to hire as many people as was necessary to do that, as long as "we didn't pay them too much."

But Cuban has spared no expense in signing new players and taking good care of them. He installed flat-screen TVs and Sony PlayStations in each player's locker. He bought the team a $46.0 million Boeing 757 with custom-made seats for his oversized employees like Shawn Bradley.

"I can probably lay down and not touch the seat in front or in back or me. So that's unusual for someone who is 7 1/2 feet tall," says Bradley.

But the people Cuban cares the most about are the paying customers who now fill the house for every game. He has tried everything he can think of to keep them entertained -- whether it's the Maverick Maniacs or one of his famous clashes with NBA referees.

"At some point, you have to bring in some fresh ideas that shake things up," says Cuban.

But when Cuban called the NBA's head of officials unqualified to run a Dairy Queen, that was real, and so was the half a million dollar fine. Even Dairy Queen was upset. But Cuban got the last laugh, turning the episode into a million dollar's worth of free publicity.

"By the time the doors opened, there was lines around the block and there were helicopters above. And it was a zoo, but it was a blast."

And then, he says he gave another half a million dollars to charity: "Anytime I get fined, I always match it to charity."

But not everyone finds him amusing, and his off-the-wall antics have clashed with the clubby, corporate culture of the NBA – alienating fellow owners and upsetting the league's commissioner.

A year and a half ago, Cuban relinquished his title as Dallas' most eligible bachelor and became a family man. His daughter, Alexis, is almost 12 weeks old.

Cuban's wife, Tiffany, was an advertising executive when they met at a local health club. In the beginning, Tiffany says she didn't know who he was.

"That was a good thing," says Cuban, laughing.

How does Tiffany, who thinks her husband is a workaholic, deal with his schedule? "You give him space and you give him a laptop," she says. "There's not a lot more he needs."

His email address is posted on the Mavericks' Web site so he can get feedback from the fans. He answers as many as he can during halftime, and when he is not too busy with his latest venture -- running HDNet, the only network in the country that broadcasts all of its programs in high definition television.

"We create more original content and high def than everybody else combined, including CBS, ABC and NBC. Our goal is to create the largest library of high def content in the world. And so far, we have," says Cuban. "Our investment in HDNet is gonna easily surpass $100 million with the first couple of years."

Cuban is betting that 40 million people will own high definition television sets within the next four years, and he plans to be there with programming people want to watch.

"Our experience shows the more HD people get, the more high def they want. And you know, we'll keep on raising the bar and stay ahead of the pack," says Cuban.

"Over the last 20 years, I've always been about what's new, what's next and how am I getting there first. It's a sprint and I have to keep on running 150 miles per hour and I don't have any time to rest. So, it brings out the fear of failure, you know, in me," adds Cuban, laughing. "What am I doing here? I've got to get back to work."

Companies and foreign countries vying for your DNA

Pete Buttigieg and the great American infrastructure upgrade
Thanks for reading CBS NEWS.
Create your free account or log in
for more features.
View CBS News In
CBS News App Open
Chrome Safari Continue
Be the first to know
Get browser notifications for breaking news, live events, and exclusive reporting.