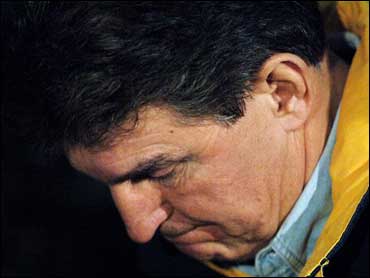 Before a crazed fan stole her youthful exuberance, before her father's slow death sapped her joy, Monica Seles was the best tennis player in the world.

On Thursday, back on center court at the French Open that she won three straight times as a giddy teen-ager, she became that unbeatable kid again.

Seles, slamming two -handed winners within inches of the lines, defeated top-seeded Martina Hingis 6-3, 6-2 to reach the French Open final for the first time since 1992.

"I do feel happy. I mean, it's really great. But I've tried to keep a sense of balance," said Seles, who pumped her fist in triumph. "I'm still going to be missing people. Some things in my life are not going to be better."

Seles, 14-2 against Sanchez vicario, is playing in her first tournament since her father died of cancer on May 14.

She is wearing her father's ring on a chain around her neck and has worn black throughout the French Open. Although the outfit was choen before her father's death, she said the color is fitting.

"I'm really glad it's not a bright color, because it just feels more appropriate," Seles said. "I try to give respect to Dad."

Seles had lost all five previous matches against Hingis, including a loss in the semifinals here last year.

Hingis had not lost a set on her way to the semifinals.

But the sixth-seeded Seles was in control throughout, moving Hingis all over the court with shots that skimmed just over the net.

Seles was the aggressor from the start, showing her intensity by walking back on court first after every changeover. Hingis, normally composed, scolded herself and bounced her racket on the clay in frustration.

"I knew I had to come out and be really aggressive," Seles said. "I knew I had that in me. I wasn't sure if I could do that today, but I really believed I could."

Hingis won every Grand Slam title last year except the French Open, losing in the final to Iva Majoli. She said Seles, who at 24 is seven years older than Hingis, ran her to exhaustion.

"I was probably getting a little bit tired. She just made me run, and she didn't make any mistakes," Hingis said. "I guess she surprised everybody."

"I mean, she was around for quite a while, then all of a sudden she was gone for years," Hingis added. "And here she is back, in better shape and probably better than ever."

Seles was 17 when she won her first Grand Slam title at the 1990 French Open, the first of three straight championships at Roland Garros. She ruled women's tennis in those years, her victories punctuated with high-pitched grunts.

Off the court, she was a goofy teen-ager with an infectious giggle.

But all that changed in April 1993, when a spectator came out of the stands at a tournament in Germany and stabbed her in the back. Seles didn't return to the tennis tour until August 1995, and even then she was subdued and emotionally strained.

The last two years have been even tougher because of the failing health of her father, who until shortly before his death was her only coach. She was at his side in Sarasota, Fla., when he died.

"Obviously, the last five years have been very difficult in terms of walking on the court, while before I only had to worry about winning or losing the tennis match," she said. "It's not the same as it was before the stabbing. It never will be, and I don't want it to be."

Seles was asked if the "Real Monica" was back, five years after the stabbing.

"I don't think the real Monica ever left," she replied. "I just think that when there's so many things going on outside your life, it's very difficult to ... go on a tennis court and be really excited about hitting a ball. Some weeks you can't even go to hit because you're just so sad about what's going on."

In the first set, Seles broke Hingis for a 3-2 lead and then closed out thset by taking advantage of two double faults to break Hingis' serve again in the ninth game.

Hingis broke Seles' serve in the opening game of the second set, after five deuces. But Seles broke right back for 1-1, then broke Hingis again in the fourth game.

Two games later, Seles overruled the net judge to give Hingis her only ace of the match. They then stayed on serve until the final game, when Seles broke Hingis' serve for the fifth time.

"Everybody knows I can play better tennis than I played today," Hingis said. "I just probably put too much pressure on myself. I really want to win this tournament."

The other women's semifinal included 15 service breaks in 21 games. Davenport held her serve just twice in 10 attempts and also was inconsistent with her groundstrokes.

"I know she was very tired, and I just had to just hang in there," said Sanchez Vicario, whose dog lapped up a lunch of ham and bread chunks while sitting with Sanchez Vicario's mother in the stands.

Leading 6-5 in the tiebreaker, Sanchez Vicario made one of her trademark remarkable saves and sent back a high defensive lob. Davenport had an easy putaway, but her overhead slam sailed wide.

"I guess I beat myself," Davenport said, "but she kind of forced it on me."