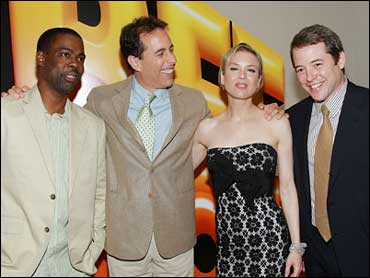 Jerry Seinfeld continues to pollinate the public about "Bee Movie," his first major project since "Seinfeld."

Thirty minutes of clips from the animated "Bee Movie" were shown Tuesday evening at the Museum of Modern Art, at a screening hosted by Jeffrey Katzenberg, chief executive of DreamWorks Animation SKG Inc. He was joined by Seinfeld, co-director Steve Hickner and actors Renee Zellweger, Chris Rock and Matthew Broderick, all of whom lend their voices to the film.

Seinfeld, who wrote "Bee Movie," has been working on it for four years. It's due in theaters Nov. 2 and has been promoted with a presentation at the Cannes Film Festival in May and a live-action TV commercial that featured Seinfeld in a giant bee costume.

As the preview clips showed, much animation work is still needed if the film will be completed by the release date, but it's clearly been a project of particular meaning to Seinfeld. Since "Seinfeld" concluded in 1998, the 53-year-old comedian has focused on standup; his only film of note was the 2002 documentary "Comedian."

"After the TV series, I didn't really want to do anything — and I still don't," Seinfeld said Tuesday. "I wanted to work in a medium I hadn't worked in before."

"I wanted to see if I could be funny in this way," he added.

Seinfeld said he got the idea for the movie simply by noticing the pun of "Bee Movie" and B-movie. The film follows a young bee named Barry Bee Benson (voiced by Seinfeld), who discovers that humans are stealing honey from bees.

When Katzenberg asked Seinfeld, "Why bees?" the comic replied that he has long been impressed by their "organizational society."

He added: "There's no other insect that produces something that people care about."