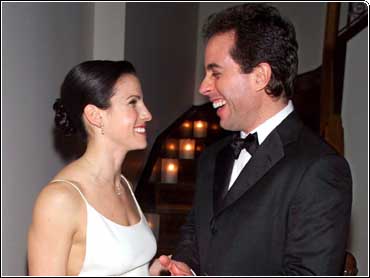 According to the New York Post, the 45-year-old Seinfeld and 28-year-old Sklar had a simple Jewish ceremony at about 6:30 p.m., with 30-40 guests in attendance. It was Sklar's second marriage in 18 months; she met Seinfeld shortly after returning from her honeymoon with theater heir Eric Nederlander.

Earlier in the day, while walking to a luncheonette for lunch, Seinfeld tried to give reporters a bum steer about his wedding. "No. We already did it. It happened last night," the Post reported.

One tip off to the actual date and place of the nuptials was that florists and deliverymen had streamed in and out of the lower Manhattan building all day. However, a woman who answered the telephone at the loft where the ceremony was to be held told a reporter it was just going to be a Christmas party.

Sklar, who handles public relations for the Tommy Hilfiger clothing line, wore a cream Hilfiger dress, while Seinfeld was clad in a tuxedo.