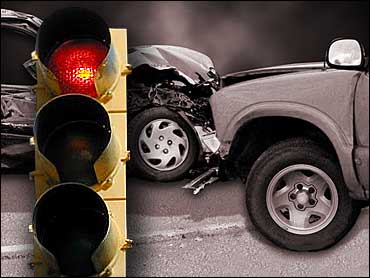 A House committee debated the merits of cameras designed to nab red light runners Tuesday, with arguments on the fatalities caused by offenders competing with charges that the cameras intrude on privacy.

Republicans sharply criticized the use of cameras to catch motorists who run stop lights at the hearing while some Democrats said Congress should keep out of local police issues.

At least 50 cities use the cameras, which snap photos of vehicles driving through red lights. Citations, usually the equivalent of a parking ticket, are mailed to owners tracked down through plate numbers in photos.

Safety studies show that approach has reduced the number of accidents, reports CBS News Correspondent Bob Orr. Supporters of the cameras and police chiefs where the systems are used say the surveillance has made intersections safer and are less costly than stationing officers at trouble spots.

But detractors say the cameras amount to Big Brother-type surveillance with the potential for abuse as a revenue-raising tool. "Red light camera programs condemn vehicle owners behind closed doors and denies them a trial — a frightening throw back to the days of the divine right of kings," said attorney Marshall Hurley.

And that may not be the worst of it. Critics told the congressional committee red light cameras, like those now being challenged in a San Diego lawsuit, are a municipal cash cow.

Lockheed Martin and the city of San Diego are defendants in a class-action lawsuit brought by motorists ticketed by the system. After the hearing, a Lockheed Martin official acknowledged in San Diego the firm received $70 from each ticket issued.

In Washington, the cameras were installed after residents named aggressive driving and red light running as the major safety issues they'd like to see addressed, said Eleanor Holmes Norton, the District's delegate to the House.

Judith Stone, president of the Advocates for Highway and Auto Safety, told committee members that an estimated 260,000 crashes are caused by red light runners every year, with more than 750 of them fatal.

She said that at several intersections where cameras have been used, violations and injuries have dropped.

"I seriously doubt anyone in this hearing room would ever question or oppose proven technology that would eliminate near-misses or midair collisions by airplanes," Stone said.

"I don't think there's anything good aout the use of surveillance cameras," Rep. Bob Barr, a Georgia Republican, told the subcommittee. "It flies in the face of virtually every Constitutional guarantee."

Barr and two lawyers testified that the use of cameras is a violation of the Fourth Amendment of the U.S. Constitution, which outlines illegal search and seizure.

But Minnesota Democrat Rep. James Oberstar said the problem was not for Congress to fix. "Those who have a problem with the yellow lights or with how companies are paid should take it up with the cities," Oberstar said.

Hedgecock said in San Diego, where camera surveillance has been suspended, intersections with cameras had amber light times shorter than the standards set by the federal traffic authorities.

A spokesman for House Speaker Dick Armey, the Texas Republican who has been one of the most vocal opponents of camera monitoring systems, said he will be looking at areas where the federal government has some jurisdiction, such as regulating the lights' timing and funding.