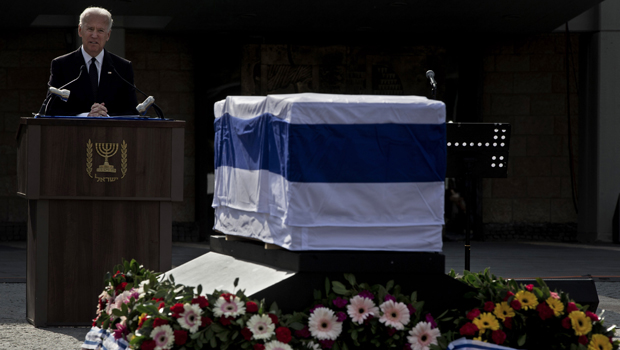 JERUSALEM -- Israel said its last farewell to the late Ariel Sharon on Monday with a state ceremony outside the parliament building before his flag-draped coffin was taken on a cross-country procession to its final resting place at his family home in the country's south.

With a high-powered crowd of VIPs and international dignitaries on hand, Sharon was eulogized as a fearless warrior and bold leader who devoted his life to protecting Israel's security. U.S. Vice President Joe Biden and former British Prime Minister Tony Blair headed the long list of visitors.

In a heartfelt address, Biden talked about a decades-long friendship with Sharon, saying the death felt "like a death in the family."

When the two discussed Israel's security, Biden said he understood how Sharon earned the nickname "The Bulldozer," explaining how Sharon would pull out maps and repeatedly make the same points to drive them home.

"He was indomitable," Biden said. "But like all historic leaders, all real leaders, he h

ad a north star that guided him. A north star from which he never, in my observation, never deviated. His north star was the survival of the state of Israel and the Jewish people wherever they resided," Biden said.

Sharon died at the age of 85 on Saturday after spending the last eight years in a coma caused by a massive stroke.

His death has reopened debate over his legacy, with foes denouncing his ruthless conduct in military operations while friends praised him as a strategic genius who had stunned the world in 2005 by pulling Israeli troops and settlers out of the Gaza Strip -- a Palestinian territory in the south.

One of Israel's greatest and most divisive figures, Sharon rose through the ranks of the military, moving into politics and overcoming scandal and controversy to become prime minister at the time of his stroke.

He spent most of his life battling Arab enemies and promoting Jewish settlement on war-won lands. But in a surprising about-face, he led a historic withdrawal from the Gaza Strip in 2005, uprooting all soldiers and settlers from the territory after a 38-year presence in a move he said was necessary to ensure Israel's security.

His backers called him a war hero. His detractors, first and foremost the Palestinians, considered him a war criminal and held him responsible for years of bloodshed.

The speakers at Monday's ceremony outside parliament largely glossed over the controversy, and instead focused on his leadership and personality.

"Arik was a man of the land," President Shimon Peres, a longtime friend and sometimes rival, said in his eulogy. "He defended this land like a lion and he taught its children to swing a scythe. He was a military legend in his lifetime and then turned his gaze to the day Israel would dwell in safety, when our children would return to our borders and peace would grace the Promised Land."

Prime Minister Benjamin Netanyahu, who resigned from Sharon's Cabinet to protest the Gaza withdrawal, said that he and Sharon didn't always agree with each other. Nonetheless, he called Sharon "one of the big warriors" for the nation of Israel.

Nearly 10 years on, the withdrawal from Gaza remains hotly debated in Israeli society. Supporters say Israel is better off not being bogged down in the crowded territory, which is now home to 1.7 million Palestinians.

Critics say the pullout has only brought more violence. Two years after the withdrawal, Hamas militants seized control of Gaza and stepped up rocket fire on Israel.

In a reminder of the precarious security situation, Palestinian militants on Monday fired two rockets from the Gaza Strip. Sharon's ranch in southern Israel, where his body was being laid to rest, is within range of such projectiles, though but Monday's missiles did not hit Israel. No injuries or damage were reported.

Biden praised Sharon's determination in carrying out the Gaza pullout, which bitterly divided the nation.

"The political courage it took, whether you agreed with him or not, when he told 10,000 Israelis to leave their homes in Gaza, in order from his perspective to strengthen Israel ... I can't think of a more difficult and controversial decision he made. But he believed it and he did it. The security of his people was always Arik's unwavering mission."

Blair, who is now an international envoy to the Middle East, said Sharon's "strategic objective" never changed. "The same iron determination he took to the field of war he took to the chamber of diplomacy. Bold. Unorthodox. Unyielding," he said.

Sharon's coffin lay in state at the Knesset's outdoor plaza where Israelis from all walks of life paid respects throughout Sunday.

In addition to Biden and Blair, the prime minister of the Czech Republic, and foreign ministers of Australia and Germany were among those in attendance at Monday's ceremony. Even Egypt, the first Arab country to make peace with Israel, sent a low-level diplomat, its embassy said.

After the ceremony ended, the closed coffin, draped in a blue and white Israeli flag, was placed in a military vehicle and driven in a police-escorted convoy toward Sharon's ranch in southern Israel.

Crowds stood along the roadside and on bridges, snapping pictures and getting a final glimpse of the coffin as the procession of vehicles left Jerusalem and snaked down the highway outside the city's picturesque hills.

The convoy made a brief stop at Latrun, the site of a bloody battle where Sharon was wounded during Israel's war of independence in 1948, for a brief military ceremony before continuing south. His coffin was lowered into the ground in a military funeral at the family farm in southern Israel.

At Sharon's graveside, his son Gilad remembered his father for overcoming the odds, whether it was battling a Palestinian uprising after becoming prime minister in 2001 or clinging to life in his final days even after his kidneys had stopped functioning.

"Again and again you turned the impossible to reality. That's how legends are made. That's how an ethos of a nation is created," he said.

Sharon's life will be remembered for its three distinct stages: First, was his eventful and contentious time in uniform, including leading a deadly raid in the West Bank that killed 69 Arabs, as well as his heroics in the 1973 Mideast war.

Then came his years as a vociferous political operator who helped create Israel's settlement movement and masterminded the divisive Lebanon invasion in 1982. He was branded as indirectly responsible for the massacre of hundreds of Palestinians at the Sabra and Chatilla refugee camps outside Beirut when his troops allowed allied Lebanese militias into the camps. An uproar over the massacre cost him his job.

Yet ultimately he transformed himself into a prime minister and statesman, capped by the dramatic Gaza withdrawal. Sharon appeared to be cruising toward re-election when he suffered the second, devastating stroke in January 2006.