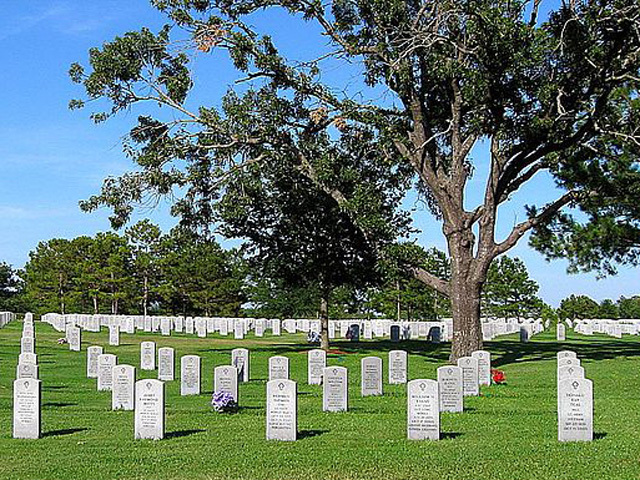 Arleen Ocasio seems to be setting herself up for a second rebuke from a federal judge. Ocasio has been, since 2009, the director of the Houston National Cemetery, which, at 419 acres, is the second-largest cemetery administered by the Department of Veterans Affairs, exceeded in size only by Arlington. Houston National has somewhere in the neighborhood of 70,000 men and women interred there, including several Medal of Honor winners and the congressman who worked to have the cemetery built and recognized as a national one. It is, like all such places, a scene of both sorrow and celebration, of patriotism -- and prayer.

Recently, however, Ocasio, the cemetery's Obama-appointed director, has been credibly accused of engaging in a pattern of censorship directed against private religious expression. The chapel has allegedly been closed, its cross and Bible removed, and it is now said to be used as a "meeting space" when it is unlocked at all. The carillon in the 75-foot bell tower no longer tolls on a regular basis. And members of the Veterans of Foreign Wars, the American Legion, and the National Memorial Ladies, attending upon the bereaved families and friends at veterans' funerals, say they have been required to have their prayers pre-approved by Ocasio's office, and have been told that the words "God" and "Jesus" are not to be used by them if they wish to continue their volunteer service at the cemetery.

This isn't the first episode of such trouble. In May, with the approach of Memorial Day -- always a day of proud and sorrowful reflection at veterans' cemeteries, typically characterized by invocations of God's mercy and His blessings on our country -- Ocasio required that the ministers who planned to speak at the cemetery submit their proposed prayers to her in advance. Pastor Scott Rainey of Living Word Church did so, and was told to revise his prayers to be more "inclusive" -- by excluding specific reference to his own religion. Appealing to the VA in Washington, Rainey was referred to a deputy in the general counsel's office, who backed Ocasio.

Rainey took his case to federal district court in Houston, where Judge Lynn Hughes sharply rebuked the VA and Ocasio, issuing a restraining order against them on May 26. As Hughes said in his opinion, "the government cannot gag citizens" in the name of "some bureaucrat's notion of cultural homogeneity." Judge Hughes further wrote:

"The government's compulsion of a program's inclusion or exclusion of a particular religion offends the Constitution. The Constitution does not confide to the government the authority to compel emptiness in a prayer, where a prayer belongs. The gray mandarins of the national government are decreeing how citizens honor their veterans. . . . "These people say that remarks need to be content-neutral messages. The men buried in the cemetery fought for their fellow Americans -- for us. In those fights, they were served by chaplains, chaplains of two faiths and many denominations, chaplains in the field. They ministered to men who needed them -- to all -- not only to their personal calling. No deputy general counsel of the Department of Veterans Affairs was in the Ia Drang Valley . . ."

Judge Hughes's restraining order applied only to the Memorial Day ceremony, but "cautioned" the government that "interferences for this suit's having been brought would be a further Constitutional violation."

Scott Rainey prayed on Memorial Day as he had originally proposed, including the Lord's Prayer and this closing: "While respecting people of every faith today, it is in the name of Jesus Christ, the risen Lord, that I pray. Amen." But now it seems that further "interferences" are exactly what has been going on, as alleged by the veterans and the Memorial Ladies. Their complaint brought the VA back into Judge Hughes's courtroom on June 28, where the department's lawyer was unable even to answer such simple factual questions as whether the chapel has been closed to public use. The government has until July 21 to answer the latest complaint of the veterans' groups. Meanwhile, Congressman Ted Poe (R., Texas) has written to VA secretary Eric Shinseki, demanding an investigation -- and the firing of Arleen Ocasio.

In some respects our problem comes from improvident opinions of the Supreme Court over the last seven decades in its rulings on the freedom of religion. The First Amendment reads: "Congress shall make no law respecting an establishment of religion, or prohibiting the free exercise thereof." By eliminating the power of political rulers to usurp or supplant ecclesiastical authority, and guaranteeing people's freedom to exercise their religious faiths, the Framers made considerable headway against sectarian strife in American politics. But they struck no blow against sectarian belief, nor did they think that peace and diversity were well-served by a mandatory watery secularism in the public square.

This all changed in what legal scholar Gerard Bradley of Notre Dame calls the "secularization project" of the Supreme Court, beginning in the late 1940s. The justices enshrined Thomas Jefferson's idea of a "wall of separation between church and state," which, whatever Jefferson meant by it, has often been taken to mean zero accommodation for expressions of religious faith in public settings such as government offices, legislatures, and public schools. This secularist dogma has led some public officials to consider American citizens too sensitive and insecure in their own individual beliefs to risk exposing them to the differing beliefs of their fellow citizens, if the exposure is in a setting connected to civic authority. So in 1992, the Supreme Court invalidated the common practice of prayer at public high-school graduations, on grounds that someone hearing such utterances might feel discomfited by exposure to the prayers of a faith he does not share.

This kind of thinking may explain the action of Director Ocasio and her superiors at Veterans Affairs. In the name of extreme separationism, secularism, and hostility to sectarian faith -- all a misunderstanding of the Establishment Clause of the Constitution -- they have assaulted the religious freedom of veterans' bereaved families, at a time when many of them feel they most need to lean on God. This is not the Constitution our forefathers made for us. This is bad history, bad law, bad morality, and tone-deaf politics.

The Department of Veterans Affairs should act according to a sound understanding of the Constitution and stop trying to dictate the content of citizens' prayers. If Arleen Ocasio cannot act according to sound directives along these lines, she should resign or be terminated. And we should all pray -- in our own individual ways -- that our bureaucrats and judges stop making such an incoherent, anti-religious mess out of our Constitution, and get right with its plain meaning.