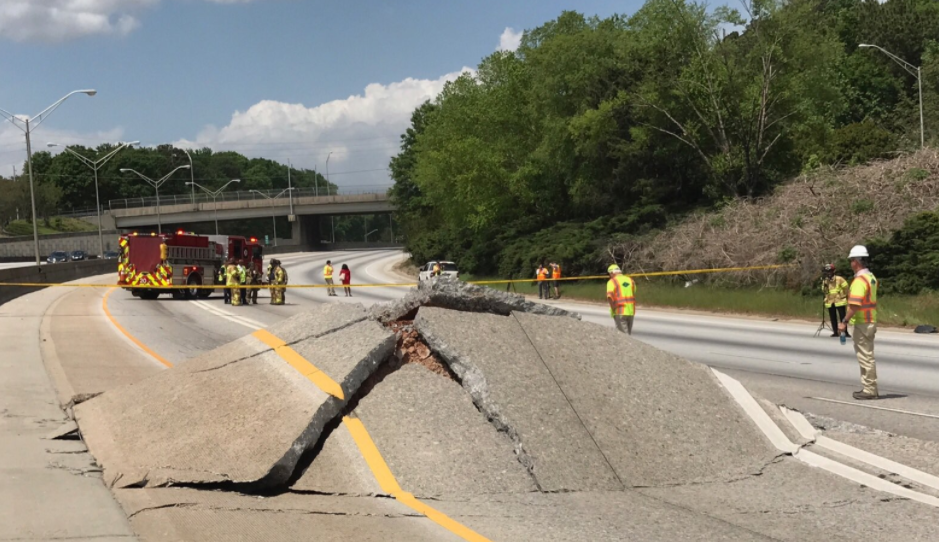 An unsuspecting motorcyclist was launched into the air and suffered serious injuries on Monday when a section of Interstate-20 in Atlanta buckled due to an underground gas leak, DeKalb County police say.

Capt. Eric Jackson, spokesperson for the DeKalb County Fire Rescue Department, said officials were responding to reports of an accident when they discovered a “defect” in the HOV lane between Flat Shoals Road and Gresham Road.

“There was a motorist, one individual on a motorcycle and one individual in a car, that were proceeding west-bound on I-20 when they saw [the buckled road],” explained Jackson, pointing out the location of the vehicles in a Periscope video, which has been viewed by more than 6,400 people. “But it was too late for them to avert it so they actually went up the broken-up concrete in an upward fashion — as if they were going up in a jump.”

Jackson says both the motorcycle and the car were “catapulted” into the air and landed approximately 10 to 15 feet down the freeway. The motorcyle rider was transported to a local hospital with critical injuries.

DeKalb County police told CBS46 in Atlanta that a crew was replacing a 36 inch gas line in the area and were filling the outdated pipe with cement, which caused the pressure to build up, the pipe to burst and the roadway to buckle.

Several I-20 westbound lanes were shut down Monday afternoon as crews repaired the damaged section.

The Georgia Department of Transportation estimated the project could take up to 24 hours. By Tuesday morning, officials announced that all lanes had been reopened.

The incident comes just a month after a massive fire a few miles away caused an major interstate bridge to collapse during rush hour. The fire burned on I-85 near Georgia 400 in Atlanta.

Luckily, in that incident, officials said no one was hurt. But the section of highway will be closed for months of repairs, disrupting commutes for hundreds of thousands of residents.