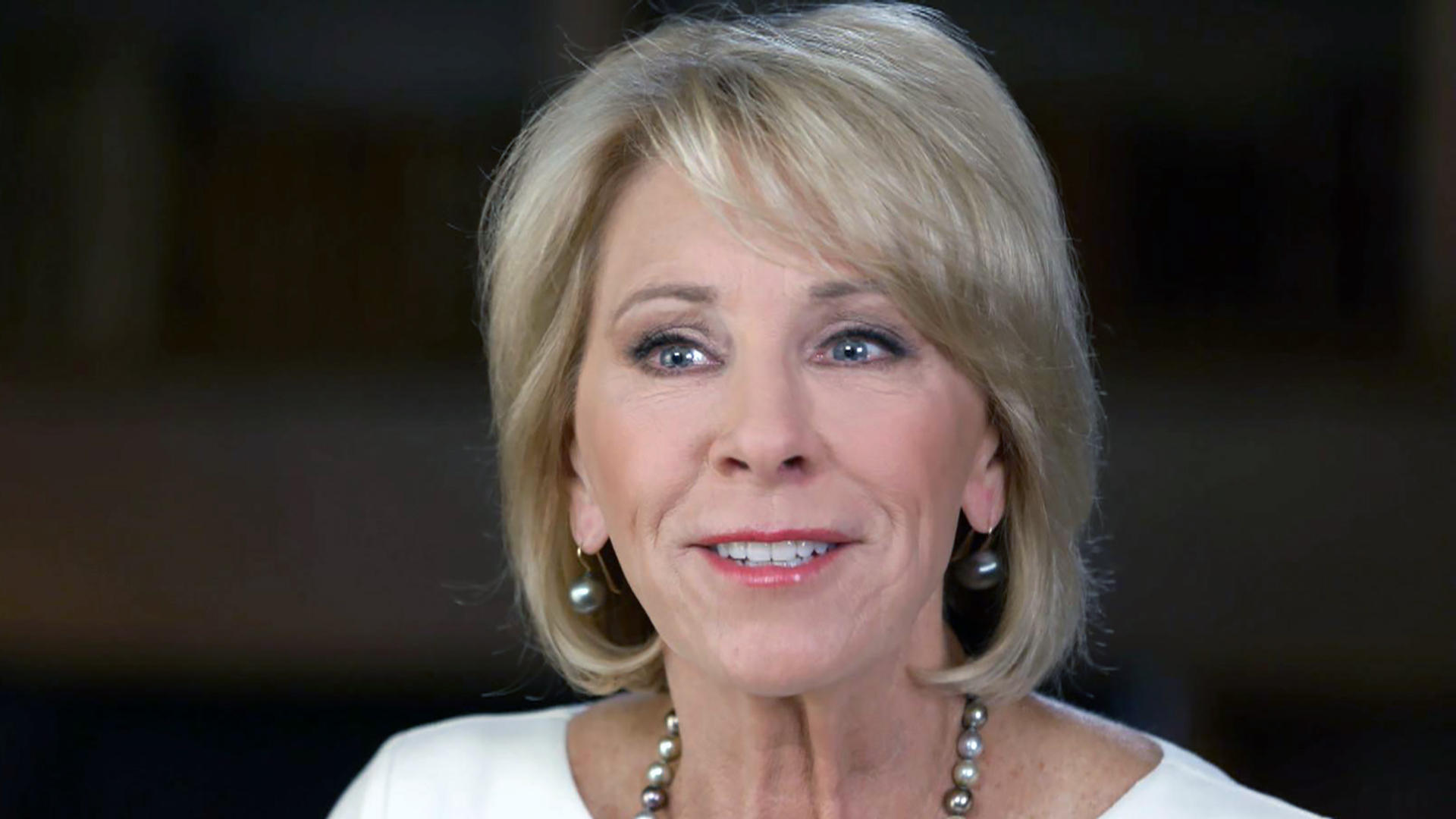 Secretary of Education Betsy DeVos is a devout Christian grandmother from Michigan -- who has spent most of her life trying to improve the quality of education for poor kids. So how in the world did she become one of the most hated members of the Trump Cabinet?

She is dedicated to promoting school choice but her critics say she really wants to privatize the public school system that she once called, quote, "a dead end."

Now, after the school shooting in Parkland, Florida, her portfolio is expanding. Monday, President Trump is expected to appoint her as head of a new commission on school safety charged with developing policies to prevent school violence.

Betsy DeVos visited the school in Florida on Wednesday, but like almost everywhere else she goes, she faced criticism. Some of the students sent out angry tweets: "You came to our school just for publicity and avoided our questions." "Betsy DeVos came to my school, talked to three people, and pet a dog." Many of the students are frustrated at the administration for talking about school safety, but not acting.

Betsy DeVos: I give a lot of credit to the students there for really raising their voices, and I think that they are not going to let this moment go by.

Betsy DeVos: They want a variety of things. They want solutions.

Lesley Stahl: Do you think that teachers should have guns in the classroom?

Betsy DeVos: That should be an option for states and communities to consider. And I hesitate to think of, like, my first-grade teacher, Mrs. Zorhoff, I couldn't ever imagine her having a gun and being trained in that way. But for those who are-- who are capable, this is one solution that can and should be considered. But no one size fits all. Every state and every community is going to address this issue in a different way.

Lesley Stahl: Do you see yourself as a leader in this-- in this subject? And what kind of ideas will you be promoting?

Betsy DeVos: I have actually asked to head up a task force that will really look at what states are doing.  See there are a lot of states that are addressing these issues in very cohesive and coherent ways.

Lesley Stahl: Do you feel a sense of urgency?

Lesley Stahl: 'Cause this sounds like talking. Instead of acting.

Betsy DeVos: No, there is a sense of urgency indeed.

"I hesitate to think of, like, my first-grade teacher, Mrs. Zorhoff, I couldn't ever imagine her having a gun and being trained in that way."

The reason Betsy DeVos wanted to be secretary of education was so she could promote school choice, offering parents options other than traditional public schools – where 90 percent of kids go. She has proposed massive cuts in public education funding and wants to shift billions to alternative players like private, parochial and charter schools.

Lesley Stahl: But that really isn't true. Test scores have gone up over the last 25 years. So why do you keep saying nothing's been accomplished?

Betsy DeVos: Well actually, test scores vis-à-vis the rest of the world have not gone up. And we have continued to be middle of the pack at best. That's just not acceptable.

Betsy DeVos: But I don't think they have for too many kids. We've stagnated

Lesley Stahl: Okay, so there's the big argument. So what can be done about that?

Betsy DeVos: What can be done about that is empowering parents to make the choices for their kids. Any family that has the economic means and the power to make choices is doing so for their children. Families that don't have the power, that can't decide: "I'm gonna move from this apartment in downtown whatever to the suburb where I think the school is gonna be better for my child" if they don't have that choice – and they are assigned to that school, they are stuck there. I am fighting for the parents who don't have those choices. We need all parents to have those choices.

"We should be funding and investing in students, not in school buildings, not in institutions, not in systems."

Question is: does her solution work? Do choice schools perform better than public schools? Naturally -- there are conflicting studies. It's complicated.

But DeVos spends a lot of time showcasing choice schools like Cold Spring Elementary, a public school in Indianapolis – that was allowed to get rid of the local teachers' union and create an innovative curriculum.

But when parents choose these options, taxpayer funds follow the child and that means that the public school left behind can end up with less money.

Lesley Stahl: Why take away money from that school that's not working, to bring them up to a level where they are-- that school is working?

Betsy DeVos: Well, we should be funding and investing in students, not in school-- school buildings, not in institutions, not in systems.

Lesley Stahl: Okay. But what about the kids who are back at the school that's not working? What about those kids?

Betsy DeVos: Well, in places where there have been-- where there is-- a lot of choice that's been introduced-- Florida, for example, the-- studies show that when there's a large number of students that opt to go to a different school or different schools, the traditional public schools actually-- the results get better, as well.

Lesley Stahl: Now, has that happened in Michigan? We're in Michigan. This is your home state.

Lesley Stahl: Have the public schools in Michigan gotten better?

Betsy DeVos: I don't know. Overall, I-- I can't say overall that they have all gotten better.

Lesley Stahl: The whole state is not doing well.

Betsy DeVos: Well, there are certainly lots of pockets where this-- the students are doing well and--

Lesley Stahl: No, but your argument that if you take funds away that the schools will get better, is not working in Michigan where you had a huge impact and influence over the direction of the school system here.

Betsy DeVos: I hesitate to talk about all schools in general because schools are made up of individual students attending them.

Lesley Stahl: The public schools here are doing worse than they did.

Betsy DeVos: Michigan schools need to do better. There is no doubt about it.

Lesley Stahl: Have you seen the really bad schools? Maybe try to figure out what they're doing?

Lesley Stahl: Maybe you should.

Betsy DeVos: Maybe I should. Yes.

DeVos is the only Cabinet secretary protected by a squad of U.S. Marshals because she's gotten death threats. She's frequently met by protesters who accuse her of pushing an elitist agenda.

She often manages to offend, as when she called historically black colleges and universities "pioneers" of "school choice" – as though they had a choice.

At this commencement speech at Bethune-Cookman University, students booed and turned their backs to her.

Lesley Stahl: Why have you become, people say, the most hated Cabinet secretary?

Betsy DeVos: I'm not so sure exactly how that happened. But I think there are a lot of really powerful forces allied against change.

Lesley Stahl: Does it hurt?

Lesley Stahl: Do you ever say--

Some of the criticism, she feels, is unfair, especially when it involves her wealth. She faced a hostile question about it during a speech at Harvard last year.

Harvard Question: So you're a billionaire with lots and lots of investments. And the so-called school choice movement is a way to open the floodgates for corporate interests to make money off the backs of students. How much do you expect your net worth to increase as a result of your policy choices?

Moderator: You can choose not to answer that secretary.

Among President Trump's cabinet of moguls and titans, DeVos is the richest: she grew up wealthy and married even wealthier. In their hometown of Grand Rapids, the DeVoses have been exceedingly charitable, their name decorates buildings like the civic center and children's hospital.

At her bruising confirmation hearing, she was grilled about her wealth and lack of experience. She's been an advocate, not an educator.

Lesley Stahl: What happened there?

Betsy DeVos: I've not had a root canal, but I can imagine that a root canal might be more pleasant than that was.

Lesley Stahl: So you've been on the job now over a year. What have you done that you're most proud of?

Betsy DeVos: Yeah. We've begun looking at and rolling back a lot of the overreach of the federal government in education.

By overreach she means regulations. And like most of President Trump's cabinet, DeVos is a devoted de-regulator. Part of her job as Secretary of Education is overseeing guidelines that protect the civil rights of students.

Just days after being confirmed, she rescinded a guideline implemented under President Obama that allowed transgender students to use the bathrooms of their choice – sparking even more protests.

She is now considering scrapping the Obama-era "guidance on how to identify, avoid and remedy discriminatory discipline," which aims to prevent schools from punishing students of color more harshly than their white classmates.

Betsy DeVos: We are studying that rule. We need to ensure that all students have an opportunity to learn in a safe and nurturing environment. And all students means all students.

Lesley Stahl: Yeah but let's say there's a disruption in the classroom and a bunch of whites kids are disruptive and they get punished, you know, go see the principal, but the black kids are, you know, they call in the cops. I mean, that's the issue: who and how the kids who disrupt are being punished.

Betsy DeVos: Arguably, all of these issues or all of this issue comes down to individual kids. And--

Betsy DeVos: --it does come down to individual kids. And--often comes down to-- I am committed to making sure that students have the opportunity to learn in an environment that is conducive to their learning.

Lesley Stahl: Do you see this disproportion in discipline for the same infraction as institutional racism?

Betsy DeVos: We're studying it carefully. And are committed to making sure students have opportunity to learn in safe and nurturing environments.

While this regulation is under review, she has already drawn fire for changing Title IX guidelines on handling sexual assault on college campuses. She's allowing colleges to require stronger evidence from accusers, and give the accused a greater benefit of the doubt.

Lesley Stahl: Are you in any way, do you think, suggesting that the number of false accusations are as high as the number of actual rapes or assaults?

Lesley Stahl: Yeah, but are they the same?

Lesley Stahl: The Me-Too Movement has come along at the same time. This is all feeding into it. We're not talking about colleges anymore. We're talking about men in positions of power in industry and government. Have you ever had an issue?

Betsy DeVos: I can recall a number of moments in the past-- several decades ago that I think today would just be viewed as unacceptable. Yeah.

It's been an unlikely journey and balancing act for grandmother Betsy DeVos, from her sheltered life in Michigan – to her life now as a lightning rod in Washington.

Angus King: An independent in the Senate
Lesley Stahl