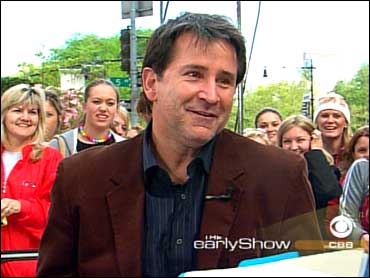 Now in its fourth season, "Without a Trace" has become a hit for CBS.

On The Early Show Wednesday, LaPaglia

chatted
with co-anchor Hannah Storm about the show's success.

Asked what makes the show so popular, LaPaglia replied, "You never know why people want to watch what they watch. But one of the things that I think is unique about the show is that we don't start with a dead body and then work backwards. We start with a missing person, so, the outcome is unsure. They could be dead, they could be alive.

"So you go through this whole process of trying to put together all the clues — and in a way, I think the audience gets to participate in trying to guess who did what. I think that might be one of the more attractive elements of the show."

LaPaglia wouldn't budge when Storm tried to coax him into revealing what happens during the rest of the season on "Without a Trace." But he did shed light on how he managed to, in effect, take the show with him to Tokyo.

LaPaglia owns a pro soccer team in his native Australia. The team did so well that it went to a championship round in the Japanese capital and, he told Storm, "I had already organized to have the time off to go to Japan. So I went to the writers and said, 'I'm going to be in Tokyo for seven days. I'm only watching two games, so why don't we run an episode that has a Japanese theme to it (since I'll have all that extra time)?

"It was just a suggestion. They didn't have to say yes. But they did. They thought it was a great idea."