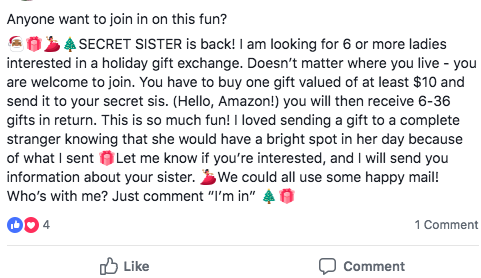 NEW YORK — A gift exchange circulating again on social media asks users to send one gift valued at $10 or more to their "Secret Sister," promising up to 36 presents in return. It seems like a great way to spread the holiday cheer, but it's not. It's a scam.

"Anyone want to join in on this fun?" one version of the post reads. "You have to buy one gift valued of at least $10 and send it to your secret sis. (Hello, Amazon!) you will then receive 6-36 gifts in return."

The post, obtained by CBS News, encouraged users to comment, "I'm In," for more information; but doing so could lead to disappointment when participants receive very few or no presents in return for their efforts.

The scam, which became popular in late 2015, is a pyramid scheme posing as holiday fun.

"The people at the top of the 'pyramid' benefit most — and might actually receive the items promised," the USPIS wrote. "However, for everyone to receive what they've been promised, each layer of the pyramid must attract new recruits. It's mathematically impossible to sustain."

It's also illegal, according to the Better Business Bureau (BBB).

"The U.S. Postal Inspection Services says that gift exchanges are illegal gambling and that participants could be subject to penalties for mail fraud," the BBB wrote. "Pyramid schemes are illegal, either by mail or on social media, if money or other items of value are requested with assurance of a sizeable return for those who participate."

Police are also warning of the scam, including the Wauwatosa, Wisconsin, Police Department telling its Facebook followers to "ignore" the exchange.

What seems like a fun way to gift-give during the holidays may leave participants out at least $10 — and provide scammers with your home address, leading to more trouble down the road.