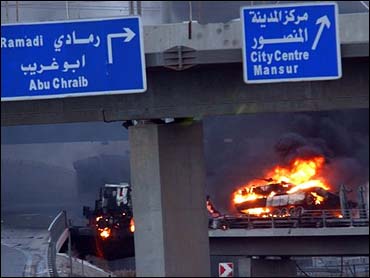 Masked gunmen assassinated a Sunni cleric north of Baghdad on Tuesday — the second such killing in as many days. Insurgents hit a U.S. convoy with a roadside bomb near the central Iraq city of Samarra, drawing return fire that killed one man.

Sheik Ghalib Ali al-Zuhairi was a member of the Association of Muslim Scholars, an influential Sunni clerics group that has called for a boycott of nationwide elections scheduled for Jan. 30.

He was shot as he was leaving a mosque in the town of Muqdadiyah and died in the local hospital, said police Col. Raisan Hussein. Muqdadiyah is about 60 miles north of Baghdad.

A day earlier, unknown gunmen assassinated another prominent Sunni cleric in the northern city of Mosul — Sheik Faidh Mohamed Amin al-Faidhi, who was the brother of the group's spokesman. It was unclear whether the two attacks were related.

The U.S. military had no immediate comment on whether there were any American casualties in the attack in Samarra, north of Baghdad. Hospital officials there said the bomb exploded off a road connecting Samarra and nearby Duluiya and U.S. troops returned fire, killing one man.