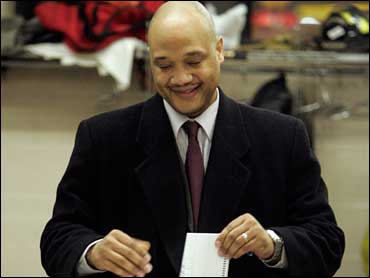 Democrat Andre Carson won't have much time to bask in his special election victory. In just eight weeks, he faces another vote for the same congressional seat.

Carson, who on Tuesday won the office formerly held by his late grandmother and became the second Muslim ever elected to Congress, will face seven challengers in the May 6 Democratic primary for a full two-year term.

"We have to hit the ground running because the future is ours," Carson said in his victory speech Tuesday night at a downtown Indianapolis hotel.

Former state Sen. Charlie Ross and attorney Gregg Harper advanced to a Republican primary runoff in Mississippi's 3rd District, which stretches from Oktibbeha County in the north to Adams and Wilkinson counties in the southwest. The winner will face Democrat Joel Gill.

The runoffs will be April 1.

In Indiana, Carson had 54 percent of the vote compared with 43 percent for Republican Jon Elrod. Carson finished with a 9,000-vote edge out of nearly 85,000 votes cast.

One of his top priorities, he said, would be ending the war in Iraq. "We need to bring our men and women back home and end this useless war," Carson said.

Carson will represent the 7th District, which covers most of Indianapolis, for the remainder of the year. The district's voters will next select candidates for the November election to a full two-year term for the congressional seat.

If Carson wins on May 6, he may again face Elrod, who is a candidate in the GOP primary, along with two political unknowns.

Julia Carson, Carson's grandmother, a Democrat who first won election to Congress in 1996 and died in December, was the first black to represent Indianapolis in Congress — from a district that is nearly two-thirds white.

"We really wish the congresswoman was here. She is here — in us," Carson told supporters.

Carson, whose grandmother raised him in a Baptist church, converted to Islam more than a decade ago and will join Rep. Keith Ellison, D-Minn., as the only Muslims in Congress. His religious identity has drawn little attention during the campaign, and Carson says he doesn't believe it hurts him politically.

"I'm a proud Hoosier," Carson said after his speech Tuesday night. "I'm an Indy 500 Hoosier, I'm a Covered Bridge Festival Hoosier, I'm a Black Expo Hoosier, I'm a state fair Hoosier. I just happen to be a Hoosier of the Muslim faith."