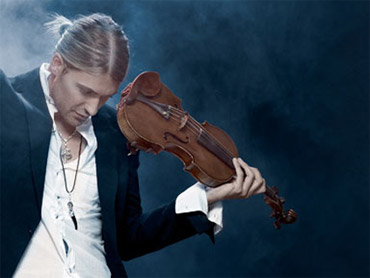 Critically-acclaimed violinist David Garrett may be able to master the greatest composers in history, but he also knows how to let loose and capture the greatest creator of pop music - the late Michael Jackson.

The 27-year-old German-born musician is already a superstar in Asia and Europe, and his rock star appeal is starting to catch on here in the U.S., thanks to his self-titled new album, "David Garret."

Born to an American mother and a German father, Garrett became a child prodigy when he was only 4. His extraordinary talent was embraced as he began to perform for the public at age seven.

He went on to study the violin at the Lubeck Conservatoire and, at the age of 12, was learning from a highly-skilled mentor, Polish violinist Ida Haendel.

When he turned 13, his efforts began to get noticed. He recorded two CDs, and made German and Dutch television appearances. As the youngest soloist ever, at age 14, he got his first contract with Deutsche Grammophon Gesellchaft.

After those perfromances, Garrett received great praise and was asked to perform at Expo 2000 in Hannover.

Garrett isn't sore on the eyes, either. His good looks even helped him pay the bills by modeling while he was studying at the Juilliard School in New York.

His self-titled album debuted at No. 1 on Billboard's Classical Crossover Chart and Current Classical Overall Chart.