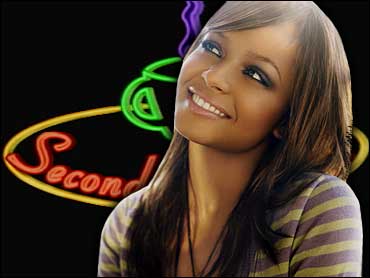 Young, beautiful and talented, 24-year-old Christina Milian keeps herself busy by balancing a career in film and music.

As a singer/songwriter she's already out with her third album, "So Amazin'," released on May 16. The album's first single and video is "Say I," featuring rapper Young Jeezy.

Her next film, "Pulse," out July 14, is a thriller about a group of young people who discover the dead are trying to cross over into our world through the Internet.

Milian was born in Jersey City, N.J., to Cuban immigrants, and raised in Waldorf, Md. She fell in love with music and dance at an early age and eventually landed a role in a touring company of the musical "Annie Warbucks."

After moving to California at 13, Milian began pursuing an acting career. Within a few years she started popping up as a guest on various TV shows including "Sister, Sister," "The Steve Harvey Show" and "Get Real." She was also an entertainment reporter on the Disney Channel's "Movie Surfer" from 1998 to 2000.

During that time, film roles began to trickle in, beginning with bit parts in "The Wood" and "American Pie."

She never lost her love for music, so she decided to try her hand at a recording career.

In 2000, she tested the waters by appearing as a featured artist on rapper Ja Rule's single "Between Me and You." The song later went to No. 1 on the Billboard Hot 100 singles chart.

Her self-titled debut album appeared in 2001 and spawned the top 30 single "AM to PM."

In addition to writing for herself, Milian co-wrote the Jennifer Lopez 2001 top 20 single "Play," and "Same Ol', Same Ol' " for girl group PYT.

Milian began splitting her time between music and acting, and in 2003 she gained more notice on the big screen in "Love Don't Cost A Thing" opposite Nick Cannon.

Switching back to music, Milian released her 2004 follow-up album, "It's About Time," which included the top 10 hit "Dip It Low" featuring Fabolous. She earned Grammy nominations for both the album and the single.

After shooting the 2005 films "Be Cool" opposite John Travolta and "Man of the House" with Tommy Lee Jones, Milian decided to go back into the studio for her third album.