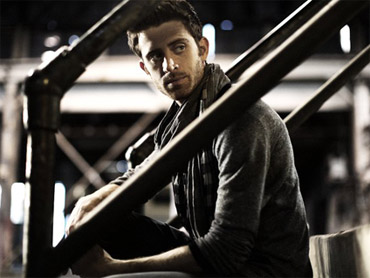 When it comes to singing, songwriting and playing piano, Brendan James is one of "The Lucky Ones" to be able to share his talent with the world.

His song, "The Lucky Ones" has catapulted his music career by hitting a high note with Hollywood. The song is currently on the trailer for the movie "How Do You Know?" starring Jack Nicholson, Owen Wilson, and Reese Witherspoon. It's also been featured in TV shows such as, "Private Practice" and "Bones."

Oprah Winfrey's impressionable team even got hooked on the gifted singer-songwriter and mentioned him in an issue of O Magazine, saying: "If David Gray's 'Babylon' burned a hole in your CD player, tune in to James' rich, vibrato-tinged croon, which straddles post-adolescent ardor and grown-up love..."

He was also featured in People Magazine and US Weekly, among others.

After receiving those high-profile plugs, there's no stopping James.

He made his national television debut performing the first single off of his self-titled sophmore release with "The Fall," as well as "The Lucky Ones" on "The Early Show" on Saturday Morning"'s "Second Cup Cafe."

Some might wonder why James would decide to go with a self-titled album the second time around. He says he did it on purpose -- and had a good reason for it.

"The album is self-titled because I feel like it's my first recording that really showcases the different sides of me as a musician," he explains on his official bio. "It's got everything from the mellow to the upbeat, to the somber to the unashamedly positive."

How did the down-to-earth Derry, New Hampshire native get started?

While studying at the University of North Carolina, Chapel Hill, James also got in touch with his creative side. He started writing songs during his sophomore year. During Christmas break at home, he was approached by a local music teacher, Kevin Kandel, who had heard him sing "Candle in the Wind" at the funeral for James' best friend's mother.

In 2003, James' manager gave him the thrill of a lifetime when he was able to pull some strings and get James' demo to one of his idols, Carly Simon. Just two weeks later, he received a call from the legendary singer-songwriter, who told him that she had begun singing his songs around the house. What better compliment could you get from your idol!

His debut album, "The Day is Brave," was released by Decca Records in June 2008 and debuted in the Top 10 on Billboard's Heatseekers chart.