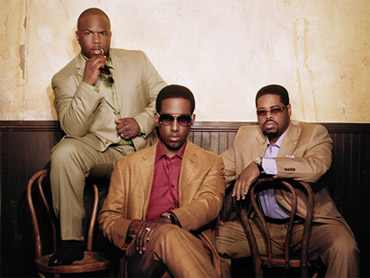 They started out singing in bathrooms and hallways in their high school.

And now, almost two decades later, Boys II Men is the most successful R&B group ever, with more than 60 million albums sold.

Nathan Morris, Shawn Stockman and Wanya Morris have just released a new CD, titled, "Love." It's a collection of covers centered on the theme of - you guessed it - love.

(Michael McCary left the group in 2003 due to his ongoing battle with scoliosis.)

Some of "Love"'s covers include Journey's "Open Arms," the Goo Goo Dolls' "Iris," and "In My Life" by the Beatles.

This isn't the first time the soulful crooners have tapped into remaking love songs with their own spin. In 2007, they released their Grammy-nominated "Motown: A Journey Through Hitsville U.S.A.," an album in which they covered classic Motown hits.

So how did it all begin for the wildly successful R&B group?

In 1990 Boyz II Men signed their first record contract with Motown Records. Still in high school at the time, the group used the acoustics in the bathrooms and hallways to their advantage and practiced an acapella version of "Can You Stand the Rain."

The following year, the group made us all fall in love with Philly with the release of their debut album, "Cooleyhighharmony," which featured the hip-hop driven first single, "Motownphilly."

Boyz II Men's hit single "End of the Road" was actually the beginning of the road for them; it was one of the biggest hits in history.

"End of the Road" spent 13 weeks at No. 1 on the pop charts, a stellar run that broke the record of 11 weeks Elvis Presley had held ever since 1956 with the double-sided single "Don't Be Cruel"/"Hound Dog."

Their next single, "I'll Make Love to You," proved just as successful. They even broke their own record with 14 weeks at No. 1. They then did it again with "One Sweet Day," featuring Mariah Carey, with 16 weeks at No. 1.

Boyz II Men are about to celebrate their twenty-year anniversary in 2010 - what a successful run!