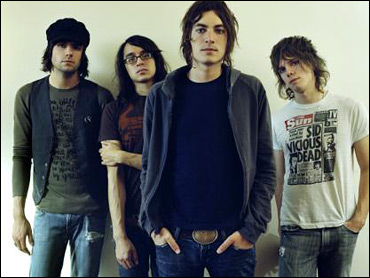 Who would have thought five young musicians from California, who got their start in Illinois, would get their big break with a song about a city that's all the way across the country?

Augustana did just that three years ago with their hit song "Boston" off their debut album, "All The Stars and Boulevards," which reached No. 1 on the Billboard Heatseekers chart and was featured on "Scrubs" and "One Tree Hill."

"It kind of seemed like the furthest point away from San Diego that you can get," singer/pianist Dan Layus told CBSNews.com.

Although there wasn't a compelling story behind "Boston," Augustana would later find that life's experiences would give them a plethora of material to draw from after that first album.

According to Layus, many people say, "You have your whole life to write your first record and then six months to write your second one," but, for Augustana, it was the other way around.

At barely 20-years-old, Augustana had the talent to gain tons of radio play, but their lyrics needed some beefing up.

"We didn't have a lot of life experiences to draw from or a lot of things to sort of really write about at that time," Layus said. "It was a real struggle to write our first record."

"This time around, there was so much more happening -- there was real-life happening, real-life decisions, real things surrounding us. There was actually a well to draw from. ...For whatever reason, I think the last record didn't really capture the spirit of the band to its full potential."

With "Can't Love, Can't Hurt," Augustana paid more attention to the songwriting, the concept, and keeping it to the point.

"We spent a lot of time living together," Layus said. "We have all watched each other grow and have meltdowns, great moments and bad moments. It's really an awesome thing. It's really a beautiful thing."

The band members are able to play their instruments interchangeably on stage, showing off their true versatility. As a result, "Can't Love, Can't Hurt" has a live component to it.

"I think with the five of us, we have all become really comfortable with the instrumentation that we have on stage," Palomar said. "I think that adds a really cool aspect to the sound. I always enjoy when a perfomer can do that. It's been really fun to branch out and do that kind of stuff."

The band draws its inspiration from Tom Petty and the Heartbreakers and Bob Dylan, among others.

"We have very lofty goals, Layus said. "We want to end up like our idols, playing 25 years from now in amphitheaters with 'greatest hits' records."
By Melissa Castellanos