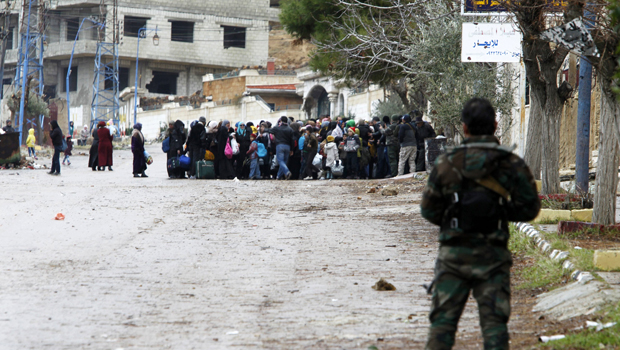 BEIRUT -- Trucks carrying humanitarian aid on Thursday entered a rebel-held town besieged by government troops for the second time this week, following reports of starvation, grave deprivation and illness among trapped residents which the U.N. chief described as a "war crime."

The operation, in which aid also entered two villages in northern Syria besieged by the rebels, is part of an effort to alleviate civilian suffering in cut-off areas of the war-torn country.

A convoy of 44 trucks from the U.N. World Food Program, International Committee for the Red Cross and the Syrian Red Crescent had headed in the morning to the rebel-held town of Madaya from the Syrian capital, Damascus. A similar aid convoy of 17 trucks drove to the villages of Foua and Kfarya, in the northern province of Idlib, which have been besieged by the Syrian rebels.

Madaya, a former mountain resort near the Lebanon border, has been under siege for months by forces loyal to Syrian President Bashar Assad. The trucks carry wheat, flour, cleaning materials and some medical supplies.

The Madaya convoy also included a nutritionist and health teams to assess the humanitarian situation, said Tarek Wheibi, spokesperson for the ICRC in Beirut.

U.N. Secretary-General Ban Ki-moon said Thursday that those responsible for the deliberate starvation of Madaya's townspeople must face justice.

"The town has been the victim of deliberate starvation. Let me be clear: the use of food as a weapon of war is a war crime. All sides, including the Syrian Government, which has the primary responsibility to protect Syrians - are committing atrocious acts prohibited under international humanitarian law," he said in a speech before the U.N. General Assembly.

The U.N. has said that 400 people in Madaya are in need of immediate medical evacuation, but Ban asked what about those who would be left behind.

"They can eat today but they fear another stretch of months in destitution if the combatants renew the siege," the U.N. chief warned.

As of Thursday, there were no reports of any evacuations from the area.

Among aid organizations entering Madaya are Care International and SOS Children's Villages, an international organization dedicated to the care of orphaned, abandoned and other vulnerable children.

Abeer Pamuk, communications adviser for the group who traveled to Madaya on Thursday, said immediately on arrival in the town, they saw "an overwhelming amount of people, all were extremely skinny and very pale."

Reports of starvation have drawn international attention to Madaya, where an estimated 20,000 to 40,000 people are thought to be trapped without food, electricity, and other basic supplies.

Officials who travelled to the town with the first aid convoy on Monday reported "heartbreaking" and nightmarish scenes they said were the worst they had seen in Syria.

In a statement UNICEF and WHO said Thursday that their teams met distressed and hungry children - some of them severely malnourished, along with adults in a similar condition during their visit Monday.

"The town's population of 40,000 is being served by only two doctors, with a limited capacity to save the lives of civilians. Health and medical services including immunization are collapsing," the statement said.

A similar humanitarian crisis was reported in Foua and Kfraya. The U.N. says around 15 municipalities are under siege in Syria, in contravention of international law.

The U.N. says 4.5 million Syrians are living in besieged or hard-to-reach areas and desperately need humanitarian aid, with civilians prevented from leaving and aid workers blocked from bringing in food, medicine, fuel and other supplies.

The International Committee of the Red Cross has called on all parties to end the sieges on Madaya, Foua, and Kfarya.

"We think there is a window of opportunity to make a significant step forward to lift all the sieges," said Dominik Stillhart, Director of Operations at the International Committee of the Red Cross.

Speaking to U.N. correspondents in New York, he said flour was being delivered to the three villages today and that the convoys would be returning on Sunday with fuel.