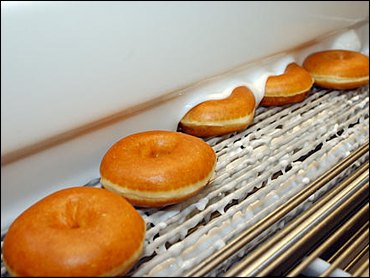 The Securities and Exchange Commission has opened a formal investigation into Krispy Kreme, the company announced Friday.

The troubled doughnut maker did not specify the reasons for the investigation in a news release. But company executives in July confirmed that Krispy Kreme is the subject of an "informal, nonpublic inquiry" by the SEC on its franchise reacquisitions and its future earnings guidance.

Krispy Kreme said in a news release that the SEC notified it of the investigation on Thursday. Company spokeswoman Amy Hughes said Friday that Krispy Kreme would have no additional comment.

That steps up the Securities and Exchange Commission's efforts to determine how Winston-Salem, N.C.-based Krispy Kreme handled the books when it repurchased franchises, some of them from executives and their families, reports CBS MarketWatch.

In July, the SEC asked the company to turn over financial statements relating to the repurchases.

In early trading on the New York Stock Exchange, Krispy Kreme shares fell 58 cents, or 4 percent, to $12.49. Before the company reported its first ever quarterly loss in May, the stock was trading near $45 a share.

Once a Wall Street darling, Krispy Kreme's stock has been battered this year. The May report was followed by subpar earnings in the second quarter.

Last year, the company reported profits of $56.7 million on revenue of $665 million. Since the bad reports of the first and second quarter of this year, Krispy Kreme has said it will not provide third-quarter and full-year guidance for 2004.

While the company's decision to blame its problems on the popularity of low-carbohydrate diets like Atkins and South Beach has drawn a lot of publicity, Krispy Kreme officials have also acknowledged problems with their business model and have said they have not paid sufficient attention to fundamentals.

Since May, Krispy Kreme has closed a number of stores and shut down the Montana Mills bread store chain it bought last year. Earlier this week, the company said it would close a $4.6 million doughnut plant in northeast Ohio due to oversupply problems.

The planned number of new stores for 2005 has been trimmed from 120 at the start of the year to 75, and Krispy Kreme has said it will now focus not on growth but on making stores more profitable. The company has reduced its sales growth guidance for 2005 by 15 percent.

Shareholder lawsuits followed the company's disastrous first-quarter earnings report. Allegations have included charges that Krispy Kreme was too aggressive in its accounting of the buyback of franchises in Michigan and did not disclose that one of the sellers in another buyback was the ex-wife of chief executive officer Scott Livengood.

Krispy Kreme last month said an independent auditor refused to sign off on the firm's second-quarter financial statement until an outside law firm hired by the company's board performed additional work.

Krispy Kreme did not specify the source of the concern, saying only that it regarded "a specific matter relating to an acquisition in fiscal 2004."

On Monday, Krispy Kreme said it had brought on board two outside directors to oversee an internal investigation into the SEC inquiries.