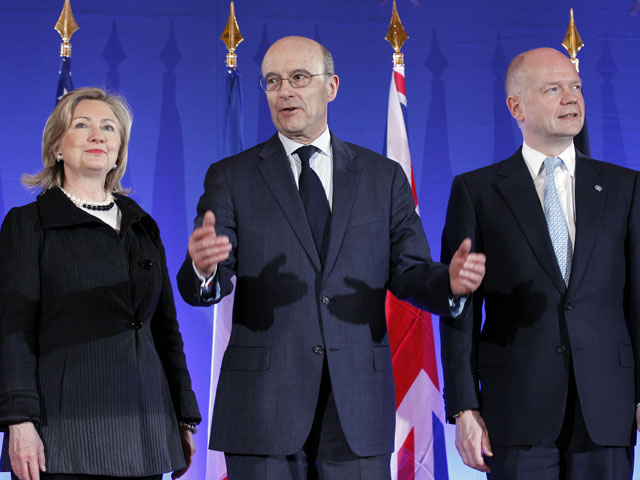 PARIS - Under pressure from allies and growing calls for military intervention in Libya, the Obama administration on Monday held its first high-level talks with the Libyan opposition and introduced a liaison to deal full time with their ranks. But it remained undecided about exactly how much support to lend a group it still knows little about while turmoil and uncertainty increase across the Arab world.

In Paris, U.S. Secretary of State Hillary Rodham Clinton held a late-night, 45-minute meeting with a senior Libyan opposition figure after discussing the widening crisis with French President Nicolas Sarkozy. Sarkozy, along with British Prime Minister David Cameron, meanwhile, stepped up calls for world powers to isolate Libyan leader Muammar Qaddafi with a no-fly zone, amid diplomatic differences over how much backing to give rebels.

Clinton's closed-door meeting with opposition figure member Mahmoud Jibril in a luxury Paris hotel was shrouded in secrecy until it happened, with neither the time nor the identity of her interlocutors announced beforehand.

Neither Jibril, an official in the newly formed Interim Governing Council based in the eastern Libyan city of Benghazi, nor Clinton appeared or made any comments about their talks. Jibril met with Sarkozy in Paris last week before photographers and journalists.

Jibril was introduced to Clinton by the administration's new point man for the Libyan opposition, Chris Stevens, who was until recently the deputy chief of mission at the now-shuttered U.S. Embassy in Tripoli. Also at the meeting was Gene Cretz, the U.S. ambassador to Libya, who left his post for consultations in early January and has not returned.

"They had a private and candid conversation about ways in which the United States can assist the Libyan people in their efforts against the Qaddafi regime," Clinton spokesman Philippe Reines said after the talks.

Although the meeting might have been a deciding factor in the administration's approach to the opposition no announcements were made after and the mystery surrounding it underscored the administration's lack of clarity as to who is who in the movement that has sprung up to topple Qaddafi from the perch he has held for 42 years.

Sarkozy has taken the lead in recognizing an interim council as Libya's legitimate government. The U.S. has yet to decide on such recognition but has severed ties with the Libyan embassy in Washington and boosted its outreach to the opposition while maintaining caution on a no-fly zone.

But France, which has angered some allies with its diplomatic recognition to the opposition, said it is important to act urgently against "barbarity" by Qaddafi's forces, which are using heavy weaponry backed by air support to reclaim rebel-held territory. French Foreign Ministry spokesman Bernard Valero, speaking to The Associated Press, pointed to an "urgency" to act because violence against civilians was increasing in Libya.

Speaking to parliament in London, Cameron said that time was of essence in responding to the situation in Libya, and said NATO was drawing up contingency plans for a no-fly zone.

"Every day Qaddafi is brutalizing his own people," he said. "Time is of the essence. There should be no letup in the pressure we put on this regime."

In Washington, President Barack Obama repeated his demand that Qaddafi step down.

"We will be continuing to coordinate closely both through NATO as well as the United Nations," and elsewhere, Obama said, "to look at every single option that's available to us in bringing about a better outcome for the Libyan people."

Germany's foreign minister, Guido Westerwelle, acknowledged that the Arab League supported a U.N.-approved no-fly zone, but had also rejected any form of foreign or international intervention." He said the Arab League would need to "not just support but also participate" in any action beyond targeted sanctions.

Italy, a G-8 member that has close economic ties to Libya, has said it would support a no-fly zone, but is against unilateral actions by its allies. Before flying to Paris, Foreign Minister Franco Frattini said Italy believes the Libyan crisis requires "an immediate cease-fire accompanied by international measures."

Within NATO, Turkish Prime Minister Recep Tayyip Erdogan, however, said that foreign military intervention would not work. "We regard a NATO intervention on Libya or any other country to be extremely useless, and furthermore, we fear that it would yield dangerous results."

The debate has turned increasingly heated in the U.S. with demands from some in Congress to support the rebels with air cover and weapons. Obama and his top national security aides have so far demurred, fearing it would further strain America's already stretched military and entangle the U.S. in an expensive and messy conflict that could be perceived as meddling. In his last public comment on the matter, on Friday, Obama said all the risks and consequences had to be weighed before intervening.

The sparring has transcended traditional political divisions in Washington with lawmakers from both parties on each side. Even families have been split. Clinton herself has been very cautious on the subject while her husband, former President Bill Clinton, has endorsed the move.

On Monday, one of Hillary Clinton's closest confidantes, Anne Marie Slaughter, who until last month was the State Department's director of policy planning, wrote an opinion piece in The New York Times entitled "Fiddling While Libya Burns" that implored the administration to act. Now a professor at Princeton, Slaughter argued that the U.S. has an obligation to intervene to prevent wholesale slaughter and embrace the potential emergence of democracy in Libya.

Meanwhile, contingency planning continues. The Pentagon has ordered warships into the Mediterranean in case they are needed for Libya-related operations ranging from humanitarian assistance to possible military action. There are now at least five major U.S. warships in the Mediterranean, including the USS Kearsarge with a contingent of U.S. Marines on board.