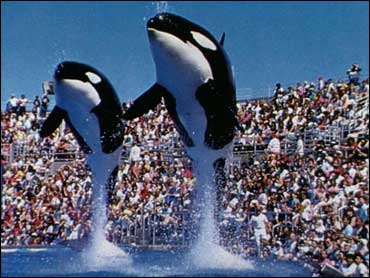 (AP)
ORLANDO (CBS/WKMG/AP) CBS affiliate WKMG reports that a female trainer at Orlando's SeaWorld was attacked and killed today by a killer whale. Emergency personnel were called to the park after 2 P.M., where they found a worker who could not be revived.

WKMG reports that a witness, Victoria Biniak, saw the attack from a viewing area. "The trainer was explaining different things about the whale and then the trainer that was down there walked away from the window. Then Tilly [the whale] took off really fast in the tank and he came back, shot up in the air, grabbed the trainer by the waist and started thrashing [her] around," Biniak said.

The attack, Biniak said, was violent enough for the victim's shoe to fly off.

Biniak said the whale, named Tillikum, or Tilly for short, does not typically have a trainer in its tank because it is too large. Tillikum is a nearly 30-year-old, 12,300-pound bull Orca. It is the largest male at the park.

The Orange County Sheriff's Office is conducting an investigation into the death. Part of the park has been closed because of the incident.