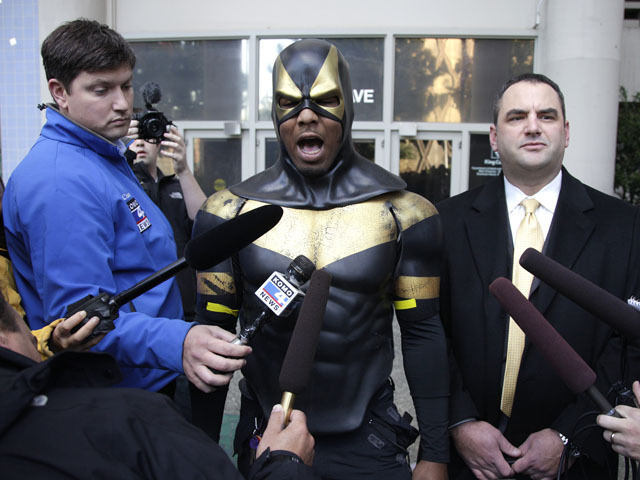 SEATTLE - A self-proclaimed superhero wore a charcoal-colored mask Thursday as he entered a Seattle courtroom where prosecutors said they hadn't yet decide whether to file charges against him in an alleged pepper spray attack.

Phoenix Jones, whose real name is Benjamin John Francis Fodor, was arrested early Sunday after police say he sprayed four people who had left a downtown nightclub. Fodor said he was trying to break up a fight when he was attacked; the club-goers insisted to police they hadn't been fighting.

During the hearing Thursday, a court officer asked Jones to remove his mask and he complied. He also wore a superhero uniform under a button-down shirt.

Prosecutors told a judge they would need more time to decide whether to file charges in the case.

Jones put his mask back on after the hearing to speak with reporters — then dramatically removed it again to reveal his true identity.

He said he's a father and a brother, and just like anyone else in Seattle.

"I decided to make a difference and stop crime in my neighborhood," he said.

"If people want to dress up and walk around, knock yourself out," he said. "Our concern is when you insert yourself into these situations without knowing the facts, it's just not a smart thing to do. If you think a situation warrants calling 911, call 911."