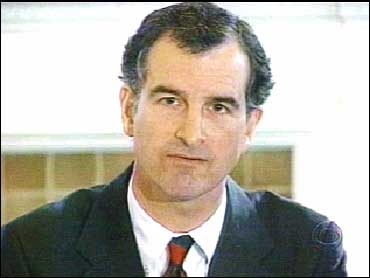 It was a stunning murder by any measure. A neighbor said he heard what sounded like firecrackers blasting repetitively.

"It was a very clear, well thought out crime," said Seattle Police Chief Gil Kerlikowske. "It was an assassination."

Wales was president of Washington CeaseFire, a group which had waged a losing battle to make gun locks mandatory in a state where gun control is a passionately contested issue.

"The person who did this attack on Tom knew that Tom went down to his computer every night about 10 o'clock to check his e-mails. Knew where his motion sensor lights were, was able to evade those lights," said Bruce Gryniewski, executive director, Washington CeaseFire.

The case is still the talk of talk radio. The lone gunman got away, and witnesses saw him flee in his car. There's no shortage of motives, prompting considerable speculation as to who was the killer. Wales' assassin could have been someone he prosecuted seeking revenge. Or it could have been someone who hated his outspoken gun control campaign.

At first, his gun control colleagues feared the issue had made him and them targets. Some were initially fearful after Wales was murdered.

"I left town for a few weeks," said Gryniewski. "I was under armed guard."

Gun rights groups say it is just as likely Wales was killed by his own gun control supporters – made a martyr.

"It has the earmarks of a professional hit … Not a disgruntled gun owner, if you will," said Joe Waldron, Citizens Committee for the Right to Bear And Keep Arms. "A lot of people are tightly wound. I would not exclude them. Do I think it was one of those people that did it? I don't know. But, I certainly would not exclude them."

All that is known for sure is Tom Wales' murder was not a crime of passion. By all accounts, it was a cold, calculated, and carried out according to plan.

"This was very well planned," said Kerlikowske. "Very well thought out and it has, of course, not only the tragedy of Tom's loss of life, but also an incredibly chilling effect, I think, on prosecutors across the country."

The killer's identity and motive remains a mystery, despite a half-year's efforts by the Seattle police and FBI investigators.