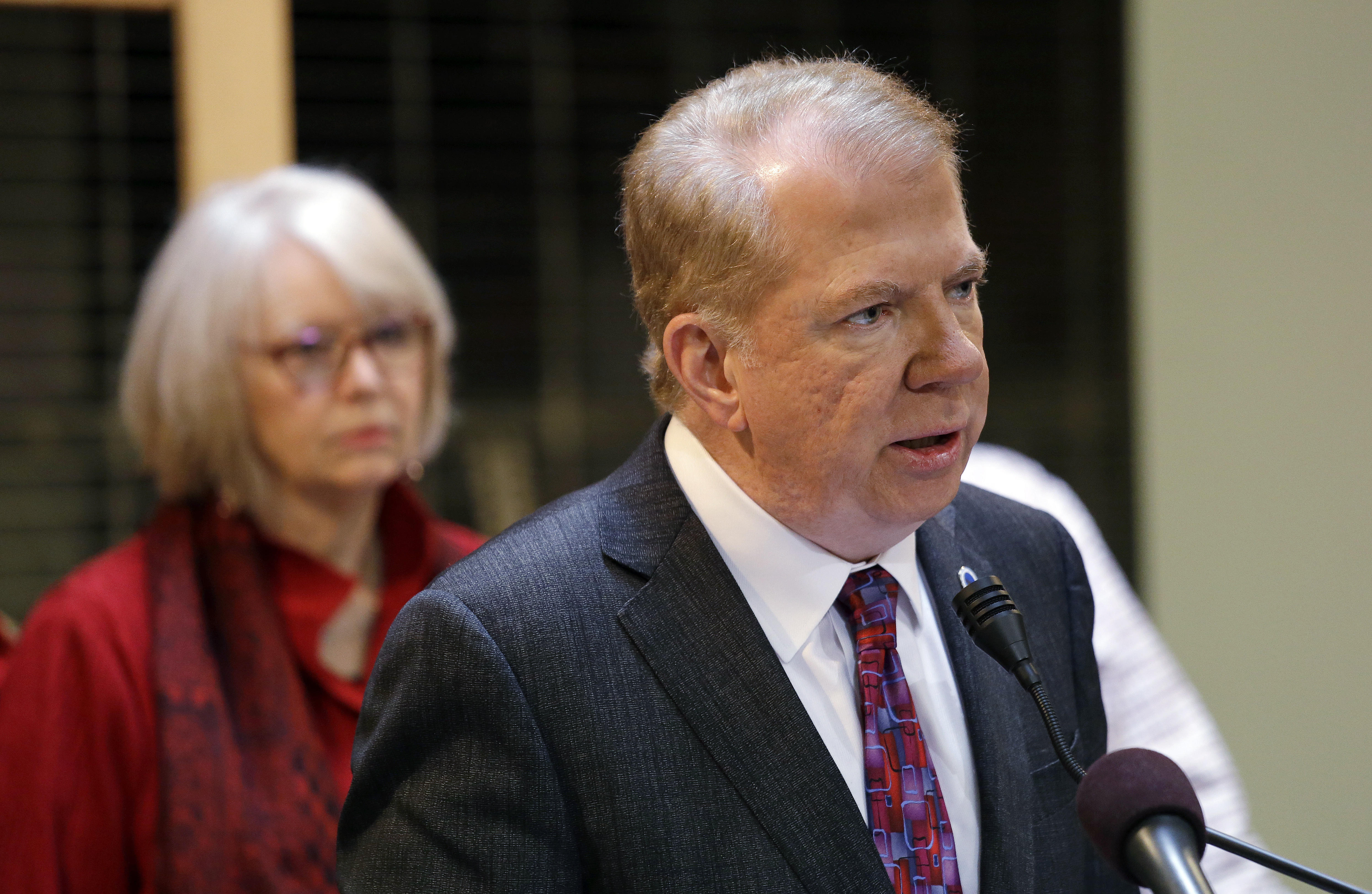 SEATTLE -- A lawsuit filed Thursday accuses Seattle Mayor Ed Murray of sexually molesting a teenage high-school dropout in the 1980s, and in interviews with The Seattle Times, two other men claim he abused them.

The mayor denied the allegations through his personal spokesman Jeff Reading.

“These false accusations are intended to damage a prominent elected official who has been a defender of vulnerable populations for decades,” said a statement issued by Reading. “It is not a coincidence that this shakedown effort comes within weeks of the campaign filing deadline. These unsubstantiated assertions, dating back three decades, are categorically false.”

Murray was elected mayor in 2013 after a long career in the Legislature, where he led efforts to legalize gay marriage in the state. As mayor he pushed to increase the city’s minimum wage to $15 an hour and address the homelessness crisis in Seattle.

In the lawsuit filed in King County Superior Court, a 46-year-old man, identified only by the initials, D.H., said Murray “raped and molested him” over several years, beginning in 1986 - when he was 15 and addicted to crack cocaine, and when Murray was in his early 30s.

Attorneys for D.H. wrote in the complaint that speculation would lead people to believe their client’s actions are politically motivated, CBS affiliate KIRO reports. They claim that is “not exactly true,” and that D.H. “believes that the public has a right to full information when a trusted official exploits a child,” according to the lawsuit.

The man said he met Murray on a city bus, and Murray invited him back to his apartment, propositioning him for sex and haggling over the price.

Murray paid him $10 to $20 for each of at least 50 encounters over the next four to five years, the lawsuit said. “I have been dealing with this for over 30 years,” the man, now sober for a year, told the Times.

He said he was coming forward as part of a “healing process” after years of “the shame, the embarrassment, the guilt, the humiliation that I put myself through and that he put me through.”

The man also said his father’s recent death freed him of a desire to keep the abuse secret.

The newspaper also reported that two other men said they knew Murray when they lived in a Portland, Oregon, center for troubled children. Jeff Simpson and Lloyd Anderson accused Murray of abusing them in the 1980s and paying them for sex and said they’d be willing to testify about it, the Times said.

The Times said one of them talked with a social worker and detective at the time. No charges were filed and an entry in an old Multnomah County district attorney’s database indicates the office considered but rejected a felony third-degree sodomy case in May 1984. Any other police and child welfare records would have been destroyed by now, officials said.

Simpson and Anderson raised the allegations a decade ago in calls to reporters and Washington state lawmakers, and they repeated them in recent interviews with the Times.

“The two older accusations were promoted by extreme right-wing anti-gay activists in the midst of the marriage equality campaign, and were thoroughly investigated and dismissed by both law enforcement authorities and the media,” the statement said.

Simpson, 49, said Murray - whom he thought of as a father - raped him over several years, starting at age 13, and in later years, paid him.

“I would really like for him to admit it and to take responsibility,” Simpson told two Times reporters who visited him unannounced in Portland. “I don’t necessarily think that he destroyed my life but I believe a lot of the problems I have stemmed from this.”

Simpson tried to bring a lawsuit against Murray in 2007, with Anderson’s support, but his lawyer withdrew from the case. In 2008, Simpson started calling media organizations and lawmakers in Olympia, saying Murray, then a state senator, was a pedophile who had sexually abused him.

Before his political career, Murray - one of seven children in an Irish Catholic family - considered the priesthood. He spent a year at a seminary in 1976 before studying sociology at the University of Portland, a private Catholic institution, according to news profiles.

Having sex with a child under 16 - the age of legal consent in Washington in 1986 and today - constitutes rape of a child under state law. The statute of limitations on any crime would have expired long ago.

The lawsuit seeks unspecified damages and says D.H. has not previously made any financial demands of Murray.