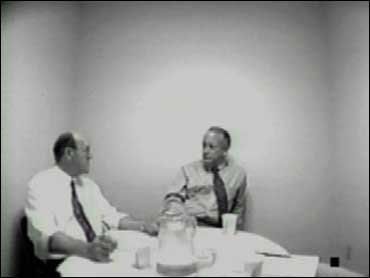 On June 23, 1998, 18 months after JonBenet was murdered, John and Patsy Ramsey, sitting in separate rooms at the same time, were questioned by Boulder authorities in a Colorado Police Station. The tapes have never been seen publicly - until 48 Hours Investigates aired them.

John's interrogator was Lou Smit, a homicide detective working for the Boulder DA's office. Detective Tom Haney questioned Patsy, who at the time was taking medication for both anxiety and depression.

There isn't a lot of physical evidence against either John or Patsy Ramsey. So the investigators were looking for inconsistencies and focusing on minute details from the crime scene.

Smit asked Patsy questions about pineapple that her daughter ate before being murdered. Autopsy results found undigested pineapple in JonBenet's stomach. And police discovered fingerprints on a bowl of pineapple left in the family's dining room on the morning of the murder.

"But now, I'm telling you they are not somebody else's. I'm telling that they belong to the one of two of you," Haney responded.

It was Patsy's fingerprints on the bowl — according to police — suggesting that Patsy gave the fruit to her daughter. But if Patsy did give it to her, and was lying about it, the investigators wondered, could she be lying about everything?

"Sometimes, the simplest most obscure little thing could be so significant," Haney said.

"Right. I did not feed JonBenet pineapple. OK? So I don't know how it got in her stomach. And where this bowl of pineapple came from. I can't recall putting that there," Patsy said.

After three days of questioning, the 1998 interrogation ended. Even though the Ramseys were not indicted, Boulder investigators continued to believe they were guilty. In August of 2000, prosecutors flew to Atlanta where the Ramsey's were then living, asking to see and hear new evidence. 48 Hours Investigates also acquired these tapes.

With John, the prosecutors mostly asked about leads he had uncovered on other suspects. But with Patsy, the interrogators were more accusatory, suggesting they had new evidence: clothing fibers that would tie her directly to the murder.

Patsy's attorney, Lin Wood, asked prosecutors to produce the evidence. When they wouldn't, he refused to let Patsy go on the record.

But she did go on the record with 48 Hours Investigates.

What does she think about these fibers? Says Patsy: "When I - after John discovering the body, and she was brought to the living room, when I laid eyes on her, I knelt down and hugged her. But I was, had my whole body on her body. My sweater fibers, or whatever I had on that morning, are going to transfer to her clothing, OK?"

Prosecutors focused on Patsy more than John, following their belief that she was the killer.

"JonBenet got up and somebody in that house - legally, lawfully, one of the three of you - also happens to be up, or gets up because she makes noise," Haney said during the questioning. "There is some discussion or something happens, there's an accident."

"You're going down the wrong path, Buddy," said Patsy.

Haney continued: "OK. Somebody accidentally or somebody gets upset over bedwetting, that's one of the things that's been proposed."

"Didn't happen," said Patsy. "If she got up in the night and ran into somebody, it was somebody there that wasn't supposed to be there. I don't know what transpired after that, whether it was accident, intentional, premeditated or what not. It was not one of her three family members that were also in that house. Period. End of statement."

These tapes don't show the Ramseys at their best. But the Ramseys made these tapes available to us, saying they want all the information about this case out in the open. As for the Boulder police and prosecutors, they denied repeated requests from 48 Hours Investigates to discuss these tapes or any other issues. Their only comment on the Ramsey murder investigation is "No comment."

Patsy says she wants to work with the police. "I appreciate being here. I appreciate it. It's very hard to be here. But it is damn sight harder to be sitting at home in Atlanta, Ga., wondering every second of every day what are you guys doing out here. You know. Have you found anything? Are we any closer? Is the guy out there watching my house? You know, is my son safe? My life has been hell from that day forward. And I want nothing more than to find out who is responsible for this. OK? I mean I want to work with you, not against you."