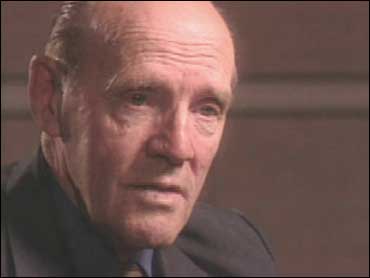 One hundred miles away from where JonBenet Ramsey was murdered, in a modest home in Colorado Springs, 67-year-old Lou Smit works every day, alone, trying to find her killer. He keeps a picture of her in his wallet.

Smit interrogated John Ramsey in 1998. He is a veteran detective who was hired by the Boulder District attorney to work on the Ramsey Murder case. At first, he thought it was the Ramseys who had killed their daughter.

But as Smit followed the evidence and questioned the Ramseys, he became convinced that the Boulder police were focusing on the wrong suspects.

"John Ramsey came through very, very sincere. When I left that I interview, there was no doubt in my mind that he had nothing to do with the death of his daughter," says Smit, who quit the investigation in disgust to work on his own to find the killer.

Says Smit: "They hired me as a detective to look at this case. They may not like what I say but I'm gonna say it. I don't think the Ramseys did it. And I think they ought to start looking for people that did."

Smit says the answer is in the evidence: the autopsy report; the intricate garrotte used as a murder weapon; the strange marks on her back; a mysterious footprint; and, most important, the information found in the DNA report. "The person who did this was very brutal and very vicious," says Smit.

What convinced Smit that someone other than the Ramseys killed their daughter? First and foremost, it was the brutality of the crime. Nearly all of the medical experts who have seen the autopsy report agree that this was not an accidental death. JonBenet Ramsey was deliberately and cruelly murdered.

JonBenet was strangled, not once, says Smit, but twice, with an intricately-made device known as a garrote, which had to have been made by the killer during the murder. Why? Because the garrote had hair intertwined with it – JonBenet's hair.

"It's a device, says Smit, that was not left there for show. Whoever killed JonBenet used the garrote to strangle her.

Smit believes that JonBenet was fighting for her life. There were marks that look a lot like scratches on her neck. "JonBenet was trying to take that off of her neck," says Smit. "She did have her own DNA under her fingernails. She was struggling with that garrote. Whoever was there with her knew that she was struggling. This is a very vicious strangulation."

At some point, the child was then hit over the head with such force it crushed her skull. But her nightmare wasn't over. Shortly before she died, investigators believe she was sexually assaulted with a piece of the paintbrush that was used to make the garrote.

The evidence, says Smit, imply does not support the popular theory that the Ramseys struck their daughter and then tried to cover it up.

"There is no motive for a parent to do this," he says. "It's not a mother waking up in the middle of the night saying, 'Oops, I think I hurt my child. Oops, I gotta bring her downstairs and fashion one of these things. Then I'm gonna put it around her neck and I'm gonna tighten it a couple times while she's struggling. And then I'm going to bury that thing so deeply in her neck that you can hardly see it.' And JonBenet at that time is struggling with the garrote. Now if you want to believe that, go ahead. I'm not gonna stop anybody. If you want to believe her mom did that, go ahead. I can't say this on the air but that's bull___."

But what about fibers from Patsy Ramsey's jacket that police say were in the paint tray and on the sticky side of duct tape covering JonBenet's mouth?

It's incriminating, Smit says, but not the whole story: "You just can't rely on fiber evidence because fibers could come off the jacket or something similar to the jacket, another item of clothing. Don't have to be that particular jacket. Fibers are fibers."

What's more, says Smit, there were also dozens of fibers that didn't come from the Ramseys, and Smit is unaware of a single case in which a parent used a garrote like this to kill a child.

Smit is not the only one. Colorado private detective Ollie Gray and his partner John Sangustin were hired by the Ramseys two years ago. Even when the Ramseys ran out of money, Ollie and John stayed on the job.

They became convinced of the Ramseys' innocence after seeing a lab report. Days after JonBenet was murdered, her parents' were asked to give DNA samples to the Boulder police. Their DNA was compared to foreign DNA found under their daughter's fingernails and in her panties, which may have been left by the killer.

"This analysis eliminates the Ramseys," says Gray. "(The DNA) does not match John or Patsy Ramsey. According to the laboratories."

If not the Ramseys, then who killed JonBenet? Smit believes that an intruder could have come through an open window in the basement.

In crime scene photos taken the morning of the murder, Smit believes he sees a scuff mark on a wall by an open window, left by someone climbing in.

Then there is the partial footprint, left by someone wearing Hi-Tec shoes, on the floor of the room where JonBenet's body was found.

"This is a very fresh print," says Smit. "It shows somebody was in that room with JonBenet. The logo on the bottom of the shoe, it says Hi-Tec. And it's quite distinctive."

This past August, the Rocky Mountain News reported that investigators believe the Hi Tec footprint was left, not by an intruder but by the Ramsey's own son, Burke.

Smit is not buying into any of it: "All of the shoes in that house were checked by the Boulder Police Department. None of those shoes match any of the prints there."

But why would an intruder who intended to kill JonBenet leave the bizarre two and a half page ransom note, written with paper and a pen belonging to Patsy? Boulder Police have always believed that Patsy used it to make the killing look like a kidnapping.

If someone was targeting JonBenet, wouldn't he bring the paper and the pencil to write the ransom note?

"Well if you want to look at it from a sophisticated criminal's mind, they probably wouldn't bring it in. Why would you bring in something that could be traced back to your house?" asks Smit.

But no expert could eliminate Patsy Ramsey as the writer of the ransom note. No problem, says Smit: "You're always going to have similarities in handwriting."

"Do you think Patsy could calmly write that ransom note after brutally murdering her daughter?" asks Smit. "I don't think so. To sit down and write a note like that with all of those details in there… after you brutally killed your daughter and you'd never done that before? Come on, give me a break."

Smit refuses to accept any money from the Ramseys. But his reputation has been tarnished by his unwavering support for them. A devout Christian, Smit was criticized for praying with the family when he still worked on the investigation.

Smit says he is only interested in finding the truth, wherever it takes him. "If the Ramseys did this and I found out I'd be the first one standing at line at the Boulder Police Department," he says.

Searching For A Killer: The Stun Gun Theory