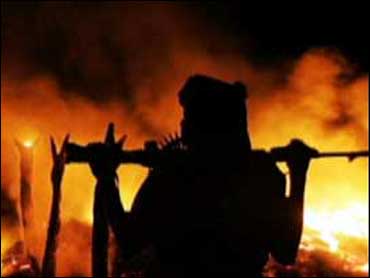 It hardly seems possible, but the genocide in Darfur continues. Correspondent Scott Pelley first reported this story two years ago, as the government in Sudan launched a new offensive of ethnic cleansing.

Today, more than 300,000 people are dead and more than two million are refugees in the Sahara.

To understand what is happening in Darfur, 60 Minutes came upon on the story of a boy named Jacob. We know him only because his name is on schoolbooks found in the ashes of his home. Jacob's village was wiped out. Our team saw his books in a museum. We didn't know whether Jacob was alive or whether we could find him, but we decided to try. Our search turned into a remarkable journey into a place we were forbidden to travel, looking for a boy swept up in the 21st century's first genocide.

The search for Jacob began at the United States Holocaust Memorial in Washington D.C. Dedicated to never letting genocide happen again, it now finds itself with fresh evidence in a new exhibit.

John Prendergast brought the remains from Jacob's village to Washington and to the Museum of Tolerance in Los Angeles. In the Clinton White House, he led a team that imposed economic sanctions on Sudan. Now, he's with something called the "Enough Project", pressing for action in Darfur.

"We found in a book bag, a series of notebooks," Prendergast explains. "Clearly the kid who was doing math and spelling homework and the teacher has corrected it with a red pen."

The kid, Jacob, must have been 16 when his village was destroyed. 60 Minutes packed his books and left on a 7,000-mile journey.

One reason the Sudanese government is getting away with murder is that the scene of the crime is about as far away as a place can be. 60 Minutes hired a bush plane to drop the team in Chad along the Sudanese border. There was no runway, just rocks marking a strip in the Sahara. There are no roads either. We crossed with Jacob's books during the rainy season, when all the rain of the year falls in just a few weeks. But this wasn't the hard part.

Our problem was, Jacob's story starts in a place we were forbidden to go. Darfur is occupied by government troops. Jacob's town, Hangala, is 50 miles inside. The U.S. State Department warned 60 Minutes not to try to go there.

If our team could get to Hangala, rebels who call themselves the National Redemption Front could help. It's their families who are being massacred, and they agreed to give us cover to Hangala.

And so 60 Minutes crossed the border. We asked the Sudanese government for permission to come into Darfur but we didn't get it, which was no surprise - the Sudanese have been trying to keep reporters and other observers out of this area. They've intensified that effort lately. In just the last few weeks two journalists have been captured making this run.

It's a five hour trip, but in the rainy season the gun trucks sank to their axels. We dug them out, and did it again every hour or so. In time, we picked up speed, and it was a good thing. Five hours turned to 12. By the time the group reached Hangala, there were 45 minutes of daylight left. The rebels put scouts on the high ground and surrounded the village.

Before the attack, Hangala was a typical village, with a population of roughly 500; afterwards, the entire village was burned down.

Asked why the entire village was destroyed, Prendergast says it's a message. "It's a message to non-Arab people in Darfur. 'We do not want you in Darfur.'"

It's a message delivered by Sudanese troops and a racist Arab militia called the Janjaweed.

How would this attack have played out on the day that it happened here?

"Five in the morning, people were woken up by the sound of aerial bombardment. And then, the Janjaweed, the armed militiamen, come in on camelback and horseback. And they start burning and shooting the men, raping the women. And then the third phase is the government forces usually on the outskirts, cleaning up anybody who tries to escape," Prendergast explains.

Prendergast estimates that hundreds of villages throughout Darfur have been destroyed this way. "We now have over two million people. About two and a quarter million people who are homeless," he says.

Survivors took children and ran, an exodus without food or shelter until they came to refugee camps. Beyond the shimmer of the Sahara, you'll find a refugee camp, Oure Cassoni. It's a warehouse for a persecuted people.

If Jacob was alive, he would be in a place like Oure Cassone. The camp was set up by the U.N. and an American charity, the International Rescue Committee, started in the 1930s to rescue Jews in Germany.

Why are these people targets of genocide today? Because they're not Arabs. Sudan's government is an Arab dictatorship. Ethnic Africans have suffered discrimination for years, and when they rebelled in 2003, the government moved to exterminate them.

Kids pay the price for their parents' wars and there are nearly 20,000 thousand children in this camp alone. Among them are four young orphans, ranging in ages from two to seven, whose grandmother packed them onto a donkey and walked three days.

The grandmother tells Pelley that 28 family members were killed.

Asked what happened to the children's parents, she says, "His mother died. The bomb that was dropped from the plane cut her to pieces. She died instantly. But the father was killed by the Janjaweed."

There were more children in the clinic. Ashis Brahma is the camp doctor - one doctor for 25,000 people.

"We have very simple drugs here but I'm doing funky medicine, voodoo medicine or bush medicine," Dr. Brahma explains. "I'm doing what we can here with the medicines we have without equipment."

Our team met a starving child framed like a picture against that vibrant culture that used to be with little certainty of a future. Dr. Brahma was hopeful for this girl, suffering with meningitis, but she died in just a few hours.

"What is it that you think people don't understand about what's going on here now?" Pelley asks Dr. Brahma.

"This is bad. They go to the villages, and they burn one village after the other, then when the people come out they catch the women and gang bang, they rape them not one guy, no 10, 15 then they carve up the men and throw them in the drinking water to make sure that this place will never ever be used again. And you're telling me the people in America don't know this or don't want to know this. Maybe its too much to know but that's what's happening right now and its happening all over again," Dr. Brahma says. "I'm sorry to say I'm going to sit here with you in two years time and I'm gonna tell you the same sad story. People will say, 'Ich habe nicht gewusst,' which is German for 'I didn't know.'"

The man who doesn't want you to know is Sudan's dictator Omar al-Bashir. He has signed a U.S.-brokered peace agreement but it never took hold. Al-Bashir launched a new offensive, and then came to the U.N. to hear President Bush say this to his face: "To the people of Darfur, you have seen unspeakable violence and my nation has called these atrocities what they are: genocide."

Why do these guys mock the U.S. in public? It turns out our government's relationship with Sudan is complicated. In the 1990's al-Bashir hosted Osama bin Laden for five years, so he has information on al Qaeda.

"It's been a very good deal for the government of Sudan to give little tidbits of information about suspects around the world in order to blunt United States outrage over what's happening in Darfur," Prendergast says.

In 2005, the U.S. sent a private jet to bring Sudan's intelligence chief to CIA headquarters.

"This is the same guy who was the architect of the counter-insurgency strategy in Darfur. What kind of signal does that send to the government of Sudan?" Prendergast points out.

"Look, this is a hard thing to swallow, because what you're saying is, the United States is in bed with the government in Khartoum on counterterrorism issues and therefore we are looking the other way on a genocide I mean, that's tough," Pelley remarks.

"I think it's a really heinous arrangement and one that history will judge very harshly," Prendergast replies.

To be fair, two administration officials told 60 Minutes the intelligence gained has been substantial. And, at the same time, the White House has been pressing hard for peacekeepers. One official said we expect al-Bashir to do both. The Bush administration was first to call the killing genocide and it's keeping refugees alive with half a billion dollars' of relief a year.

Our journey to find Jacob brought us to Oure Cassoni because U.N. records showed someone by the same name applied for a ration card here years ago. The people of Hangala were now in a part of the camp called "Zone C." So, nearly three years after they were left in the ruins, 60 Minutes brought the books to Hangala's teachers.

One of the teachers recognized the name. "I was his teacher. I taught him," he told Pelley. "He is one of the best students."

The teacher offered to take us to see Jacob.

When arriving at Jacob's home, Pelley introduced himself. "Jacob? Hello, I am Scott. This is John. Sit down we want to show you something."

Speaking through an interpreter, Jacob asked where the books had been found.

"All of this is mine," Jacob said.

Jacob was now 19, and had been in the camp two years.

Asked what happened to him on the day his home was attacked, Jacob said, "The Janjaweed, aided by government troops, attacked and burned the village."

As for the rest of his family, Jacob says some of them were killed and others ran away. "We don't even know where they are right now," he told Pelley.

We noticed how calmly he told the story. It's a strength of his tough desert tribe. And besides, he told us, the horror's too fresh to dwell on.

"We are disturbed, everybody is disturbed, we couldn't think straight, so we never got the chance to sit together and to think of whom we have lost and who is still there and our lives before," Jacob said.

As for one of the items we brought along, Jacob said it belonged to his younger brother.

"He was scared by the bombing. And, when the Janjaweed attacked he ran. Nonetheless, he was killed," Jacob said.

His brother was almost four years old and had never entered school.

Jacob was glad to see his books again but asked us to take them back to the museums for the whole world to see, as he put it. We took the books but we left Jacob as he was, one of more than two million refugees who can't go home and have no future in the camps. As we headed out, Sudan's government had launched its new offensive in this African holocaust - what may be its final solution for the people of Darfur.