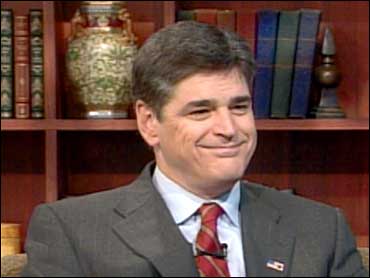 As the outspoken, conservative host of the cable news show "Hannity & Colmes," Sean Hannity, who also has his own radio show, provides a no-holds-barred look at current events.

In his new book, "Deliver Us From Evil," Hannity offers his assessment of where America is in the war against terror and his insights into the presidential campaign.

"I think your view of that word evil or how you react to it will greatly influence your view of political events," Hannity tells The Early Show co-anchor Hannah Storm. "As it relates to the war on terror, if you don't believe evil exists, you're less inclined to defeat it. We've seen evil in the Holocaust. I have a chapter about it in the book, this classic battle between Chamberlain and Churchill. Churchill understood what Adolph Hitler was all about. Chamberlain, even after the annexation of Czechoslovakia, thought he could have peace in their time."

In the present time, the war in Iraq has politically polarized our country. In a latest CBS News poll, 50 percent of Americans believe the Bush administration exaggerated intelligence about the weapons of mass destruction. Asked if the president has a credibility issue and if the White House is addressing it effectively, Hannity says it is Democrats who have been saying that the president lied and now people believe it.

He says, "We've been hearing it every day. It's been a non-stop mantra by the elect in this country. I'm going to tell you something, when you look at John Kerry for '93 to 2003, he was warning about the dangers of weapons of mass destruction. When Bill Clinton bombed them in '98, he talked about their nuclear, their chemical, their biological capabilities, Saddam in this particular case. The U.N. told us he had it, France told us, Germany, all of our allies understood it. I think the big question with weapons of mass destruction, we're going to be honest here, is not that we didn't find them. We need to know where they are. And if I had to bet any amount of money, I would say they probably were removed as we had a buildup to war."

Read an excerpt from "Deliver Us From Evil":

Chapter One
Terrorism, Despotism, and Liberalism

Three years ago, evil surfaced in the Western world in a way it had not in six decades, since the day of infamy at Pearl Harbor. Americans were forced to confront pure human wickedness in a way we had not in generations. And in that moment we rose as one nation to the challenge -- led, fortunately, by a leader who had the clarity of vision to recognize that evil for what it was, and to rally America and the world against it. Even many of the most committed liberals seemed to have their compasses reoriented in the face of that unmistakable act of war and crime against humanity.

But nearly three years have passed. And in the intervening time our wounds have healed, our senses and memories dulled. The nation rallied behind its leader long enough to expel the state sponsors of evil in Afghanistan. Yet by the time the confrontation with Iraq presented itself, our courage and moral certainty seemed to fade in the face of partisan bickering and posturing. We toppled a murderous dictator in Iraq -- and yet now the political left and the Democratic Party are trying to use the demanding aftermath of the war to exploit our national cause for their own political advantage. How could we allow ourselves to forget so soon?

I decided to write this book because I believe it is our responsibility to recognize and confront evil in the world -- and because I'm convinced that if we fail in that mission it will lead us to disaster.

Evil exists. It is real, and it means to harm us. I believe this strongly, and not just because of my Catholic faith, although that's the root of it. When you work in the news business, you deal with the ugly side of life. Every day across your desk comes story after story about man's inhumanity to man, from mass murderers to child molesters to mothers who drown their children to husbands who murder their pregnant wives. These stories push the limits of our ability to imagine man's potential for depravity, and yet they are horrifically true.

Still, isolated events like these pale beside the pure evil of September 11. How could anyone witness the horrors of that day, or the mass graves discovered in Iraq after the fall of Saddam Hussein, and dismiss the idea of evil? And yet many people do -- most of them political liberals. Even when they can bring themselves to acknowledge the brutality of a venal tyrant such as Saddam Hussein, they qualify it. "We are not denying that Saddam is a repressive dictator," they say, "but we don't believe we should have attacked Iraq without giving him more time to comply with the U.N. resolutions." For the appeasement-minded liberals of our country, there's always a "but."

It's difficult for liberals to see such moral questions clearly, because most of them are moral relativists. They reject absolute standards of right and wrong. In their worldview, man is perfectible, human nature is on a linear path toward enlightenment, and the concept of sin is primitively biblical. In their view, society's unfairness compels people to break the law. To them people like Saddam and Osama bin Laden are not morally depraved murderers, but men driven to their bad acts by the injustices of Western society.

The emphasis is always on giving bad actors -- domestic and foreign -- the benefit of the doubt, never on personal accountability. After all, if we can blame external circumstances or internal imbalance, then we can avoid the messy business of calling the evildoers to account. This kind of thinking s all too familiar from our courtrooms at home. The justice system today is crawling with "experts" eager to exonerate the most heinous criminals on the grounds that they're "genetically predisposed" to murder, rape, take drugs, or otherwise endanger the welfare of others; the media fills its airwaves with liberal advocates eager to sympathize with murderers on death row, instead of the families of the innocent victims.

The trouble with tolerating evil, of course, is that while we're averting our eyes, the evil itself only grows and festers around the world. This has been true throughout history. Neville Chamberlain assured a wary England that an appeasement pact with Adolf Hitler would lead to "peace n our time." Cold War liberal elitists ignored or downplayed the atrocities of communism, from the gulag of "Uncle Joe" Stalin to the killing fields of Cambodia. Bill Clinton stood idly by while Islamic terrorists attacked American targets throughout the 1990s, in a long prelude that should have alerted us to their burgeoning war on America.

The primary evil we face today is terrorism. But we will never triumph over the terrorists until we realize that groups like al Qaeda are not working alone. Without the deep pockets of terrorist-friendly dictatorships like Saddam Hussein's Iraq to support them, the loose networks of Islamic terrorism would pose only a fraction of the danger to civilization they currently do. And those dictatorships, we must realize, are the same brutal regimes that have oppressed their own people for generations.

As President Bush has declared, we can no longer wait around for terrorists to attack us. We must take the war to them, rooting them out of their swamps and destroying the despotic regimes that furnish their lifeblood.

But the president also warned that this would be a war like no other. It would be fought on a variety of levels, against a largely invisible and unconventional enemy. Sometimes our efforts would be conducted out in the open, for all to see; at other times, though, they would be as invisible to the public as the terrorists themselves ...

The foregoing is excerpted from "Deliver Us From Evil," by Sean Hannity. All rights reserved. No part of this book may be used or reproduced without written permission from HarperCollins Publishers, 10 East 53rd Street, New York, NY 10022