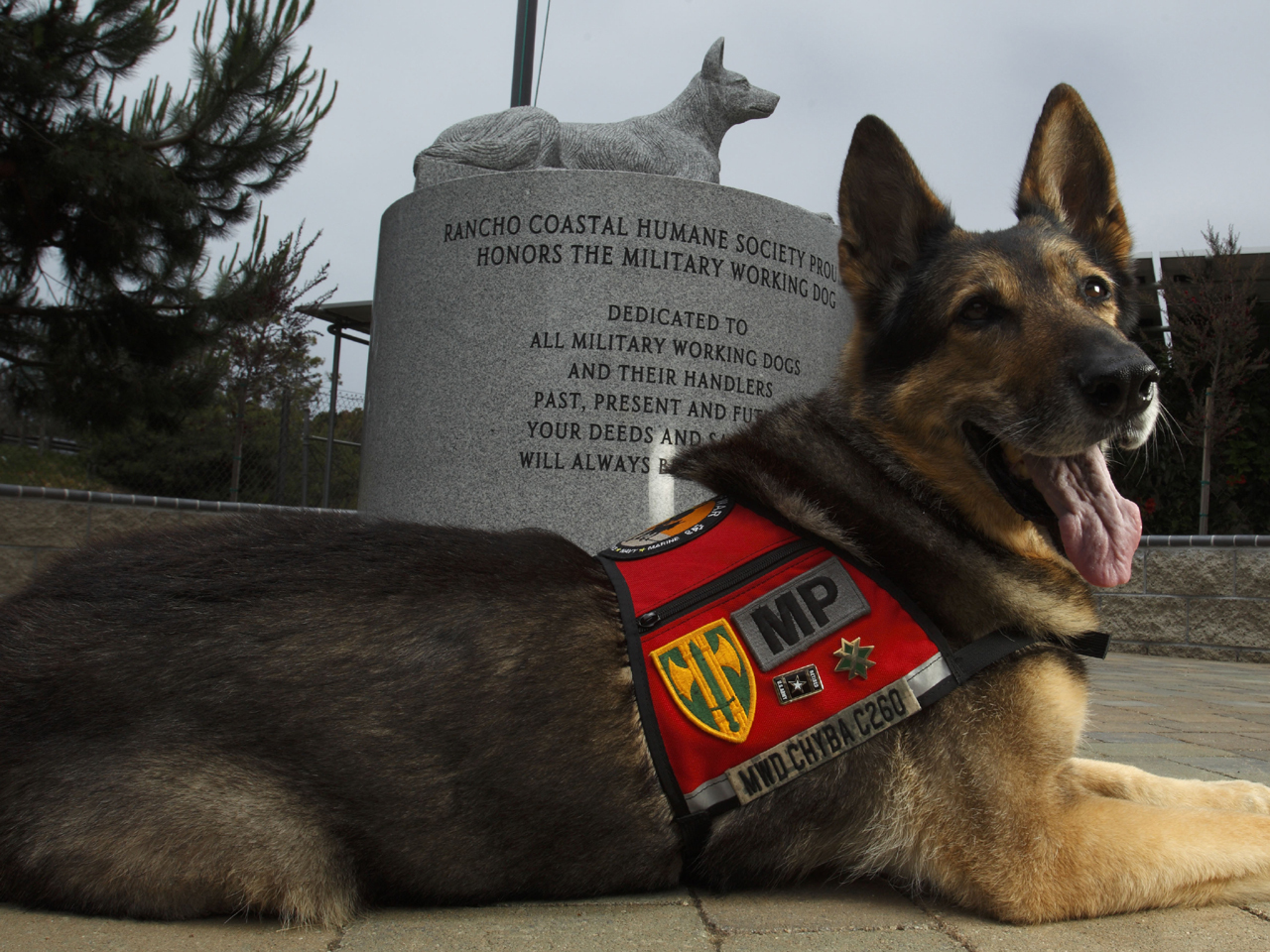 SAN DIEGO -- Life after the military is looking brighter than ever for America's four-legged veterans since one of their own helped in the mission to kill Osama bin Laden.

War dog organizations say the number of people asking about adopting retired military canines has risen dramatically since the mission involving Cairo, the Navy SEALs dog tasked with tracking anyone who tried to escape from bin Laden's compound and alerting the special operations forces to anyone approaching.

While about 300 retired U.S. military dogs are put up for adoption each year, military officials say they've received more than 400 adoption applications in the three weeks since the May 2 raid. In past generations, most military dogs were euthanized once their tours of duty were done.

"They made a really big deal about Cairo being a super dog, but all dogs in the military are super dogs," said Ron Aiello, president of the U.S. War Dogs Association. "These dogs are fully trained, are worth probably $40,000 to $50,000 each at least, and it's a dog that has been saving American lives. It's kind of a hero in a way."

Aiello, a dog handler for the Marine Corps during the Vietnam War, started his organization with other former dog handlers to teach Americans about the long and often sad history of the dogs that have been deployed with troops.

The attack on Pearl Harbor sparked the U.S. military's interest in war dogs, which Germany and France used in World War I. Prior to the Vietnam War, the canines were trained to be fierce attack dogs that greatly distrusted humans. But the military soon found that limited them too much and started training German shepherds and other breeds to be patrol dogs.

Today, military dogs are used to find explosives, insurgents and drugs, and to help search for missing people. Some are so highly trained they can work off leash and follow commands whispered by their handlers through a specialized communication system attached to the dog.

The dogs are credited with saving thousands of lives. Last year, Aiello said, a dog on patrol in Iraq detected a fertilizer bomb on the other side of the door in a building. The dog sat down and alerted U.S. troops, who spotted the explosive by looking under the door.

If the dog had not sat down, troops would have opened the door and the building might have blown up, killing all inside.

Other times, the dogs can only do so much. When a sniper's bullet struck Pfc. Colton Rusk in Afghanistan, the first to reach his body was his best friend Eli -- a bomb-sniffing, black Labrador so loyal he snapped at other Marines who rushed to his fallen handler. Rusk died Dec. 6. His parents have since adopted his dog.

After the Vietnam War, only 204 of an estimated 4,900 war dogs returned to the United States, according to military dog organizations. The others were euthanized, given to the South Vietnamese army or abandoned by soldiers trying to save the dogs.

That changed in 2000 when President Bill Clinton signed a law allowing the dogs to be adopted. Dog lovers say the military has made dramatic strides since then. Last year, 338 dogs were adopted, including 34 that were given to police departments or other government agencies.

None are euthanized now, said Gerry Proctor, a spokesman for Lackland Air Force Base in San Antonio, where the military's dog adoption program is based.

"All the animals find a home," he said. "There's a six-month waiting list right now for people wanting to adopt. And (the applications) have gone up substantially since the raid."

The nonprofit Military Working Dog Adoptions has received over 300 inquiries in the past two weeks, said Debbie Kandoll of Las Cruces, New Mexico, who founded the organization after getting her first war dog in January 2008. Her group and Aiello's help raise awareness about the retired dogs, make sure they are treated well and help people through the process of adopting the animals.

Aiello said the most common breeds for military canines are Belgian Malinois, Dutch shepherd, German shepherd and Labrador retriever. They are generally older than 10 when they retire, and some have a litany of medical problems.

"They only have a couple of years left, so why not have them spend it with a loving family where they're not going to hear gunfire go off, explosives go off," Aiello said.

Not all the dogs could do well in a home with, say, children or other pets, but some are remarkably docile after spending years on the battlefield.

A dog named Chyba was deployed to Iraq before Madeleine Pickens, wife of billionaire T. Boone Pickens, adopted her last year. Pickens said Chyba is a sweet, relaxed dog who is happiest stretched out in the shade of a tree.

It's not cheap to adopt a military dog, in large part because adoptive owners often have to pay $1,000 to $2,000 to bring them back to the U.S. on commercial flights. Putting a retired dog in a crate on a military cargo flight is against the rules.

When dogs are adopted, they no longer belong to the military, "so it would be fraud, waste and abuse for the DOD to transport that pet," Maj. Gen. Mary Kay Hertog told the Air Force News Service in 2009.

Officially, military dogs are considered equipment, and retired dogs are excess or surplus equipment. Kandoll wants the military to reclassify the dogs as canine veterans. That would take an act of Congress, but it could also ensure that all dogs shipped out of the United States are brought back.

"Uncle Sam gave the dogs a ride over. He should give them a ride back," Kandoll said.

"To me, it's like leaving a soldier behind," said Pickens, who spoke in Encinitas last month at the dedication of a monument to military working dogs.

It's unlikely that Cairo will have any trouble getting adopted, but military officials aren't saying how far the dog is from retirement. They aren't releasing his age or any other details about the special operations canine because his work is classified.