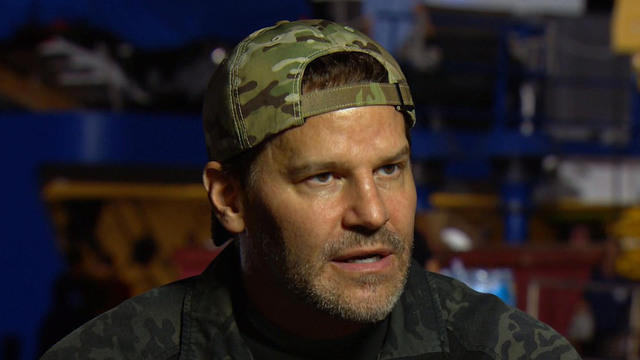 In the new series "SEAL Team," the military's elite are put to the test as they tackle dangerous undercover missions abroad and life at home. The CBS drama follows the personal and professional lives of a group of Navy SEALs as they train for, plan and carry out risky operations around the globe.

CBS News correspondent Carter Evans went behind the scenes to see how former members of the military's special operations forces helped guide the cast and crew.

"SEAL Team" is the latest project for actor David Boreanaz. He spent nearly a decade playing a vampire in the popular series "Buffy the Vampire Slayer" and its spinoff, "Angel." Most recently he starred as an FBI agent in the long-running TV hit "Bones."

To tell the story of one of the military's most covert units the show partnered up with real-life former members of the special forces.

"The majority of our time has been spent in the writers' room crafting stories," said former Navy SEAL Mark Semos. He and former U.S. Army special operations soldier Tyler Grey offered their guidance on and off screen.

We visited the cast as they prepared to shoot a scene in which the SEALs try to rescue a group of hostages on a boat captured by terrorists.

The show also explores life outside the operations – something Grey, a nine-year military veteran, knows all too well.

"Even when I'm in a scene, it's like the skill set I've worked on for so long – like, where do you go with that, where do you go?" Grey said. "Now I get to use it. A big problem that a lot of people have is finding an outlet for it and this is my outlet."