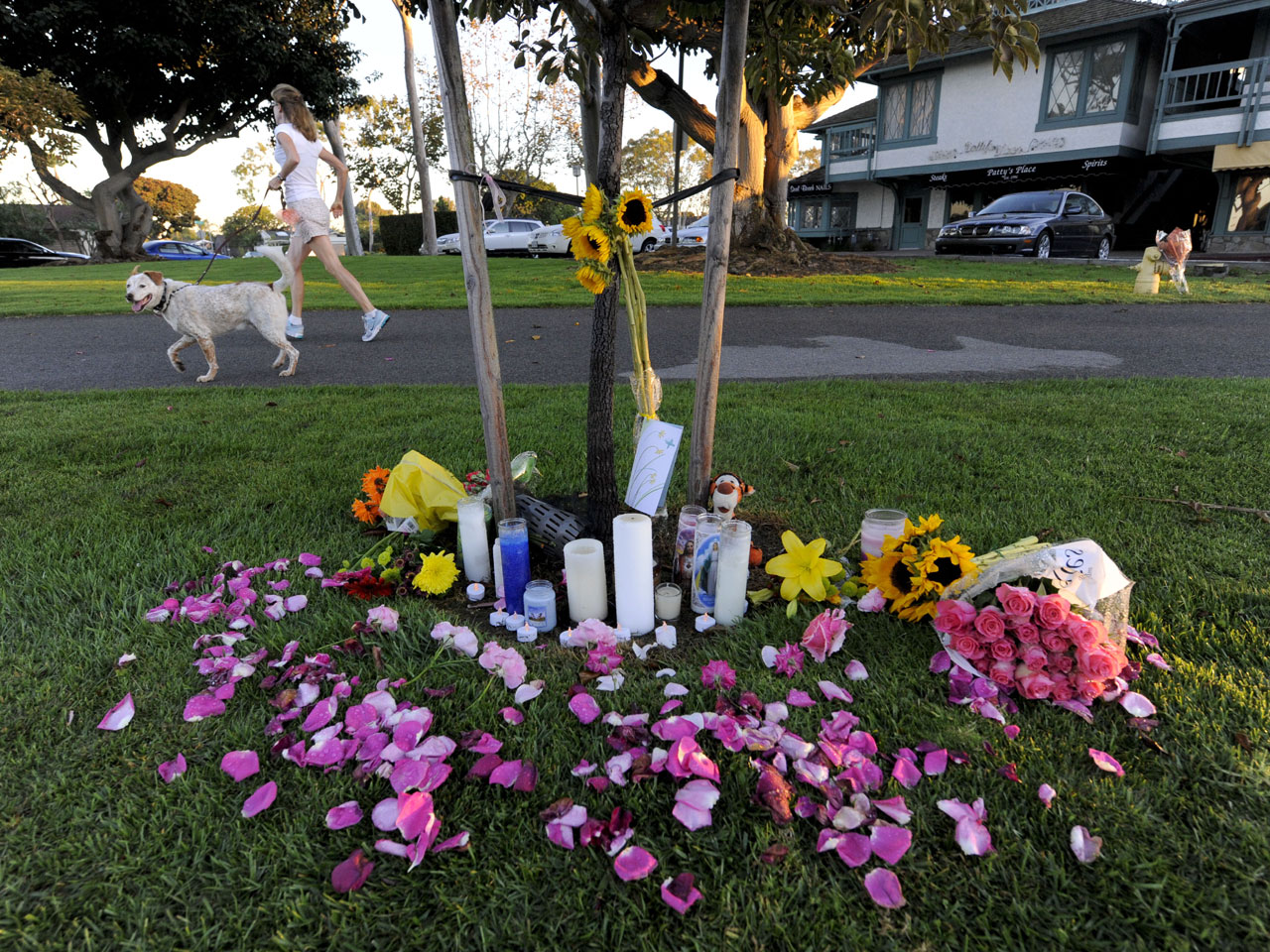 SEAL BEACH, Calif. - A memorial to the victims early Thursday to the victims of the Seal Beach salon shooting started with two candles, some pink Hybiscus blooms and a handwritten poem called "The Day After."

Written on line notebook paper and signed only Laurie, it was "dedicated to all who lost and a most precious Seal Beach that didn't deserve this carnage."

Mary Stearns of Huntington Beach came by to show her respects and leave a red candle. She knew Randy Fannin, the salon owner, for more than 30 years, following him to three different salons over the years to get her hair done every eight weeks.

"I was going to have him over for Christmas. I just saw him on Saturday. I had a bottle of wine I brought back from Australia. He loved wine," she said.

Every hair-dressing station was full at Salon Meritage on Wednesday when a gunman burst through the door and began shooting, sending terrified customers diving for cover in the upscale salon tucked just blocks from the beach in this quaint seaside town. The shooter then stepped outside, shot a man sitting in a truck in the parking lot and sped off.

Six women and two men died. Their identities were not officially released, but owner Randy Fannin's niece, Tami Scarcella, told the Los Angeles Times her uncle was among the dead.

Police arrested 42-year-old Scott Dekraai about a half-mile from the scene. He did not struggle, police said. The gunman wore body armor and had several guns, police and witnesses said.

Police did not release a motive for the shooting. However, court records and acquaintances said he and his ex-wife, Michelle Fournier Dekraai, of Huntington Beach, who worked at the salon as a licensed cosmetologist, had been locked in a bitter custody battle over their son since he filed for divorce in 2007.

It was unclear whether Fournier was among those killed.

A woman who was wounded in the rampage remained in critical condition Thursday, police said. Sgt. Steve Bowles said the woman was showing some signs of improvement. Her name was not released.

The crime scene tape around the salon was gone early Thursday, with blinds on the side windows drawn and black plastic bags taped over the front windows and door.

A woman who gave her name only as Cindy told the Orange County Register that she was in the salon, having her hair colored, when the gunman came in, went up to a woman stylist and fired.

At first, the customer said she thought it was a Halloween prank.

Then the man shot a woman who was having her hair shampooed, and then shot the salon owner, who was coloring Cindy's hair, she said.

Cindy said she ran next door to another business, where she went into the bathroom, closed the door and turned out the light.

"There was like a `pop pop' ... and my receptionist screamed out, `He just shot that man' and we all went into the bathroom and called 911," said Kimberly Criswell, who owns a salon two doors away and knew many hairstylists at Salon Meritage. "I'm sure I've lost some friends today."

It was the worst mass shooting in Orange County history since July 12, 1976, when custodian Edward Allaway killed seven people and wounded two others at California State University, Fullerton. Allaway was convicted of murder but later found to be insane.

Glenn Zachman, who owns a video news-gathering service, said he arrived at the scene of the arrest shortly after police and saw they had placed plastic bags over the man's hands to preserve possible gunshot residue.

The man, in handcuffs, was placed in a patrol car and taken away about two-and-a-half hours after the shooting. A new white pickup truck that was believed to be his was parked on the modest residential street with its doors open.

The man was cooperative when officers, working from a description of the shooter, stopped him near the salon, Bowles said.

Shortly after he was arrested, police arrived at a house on Melody Lane in nearby Huntington Beach and escorted two women to a white car and then roped off the house with crime scene tape. The house is registered to Scott Dekraai.

Lydia Sosa, a hairstylist who left two years ago to work at a new business with her friend, said the gunman's ex-wife spoke often of her relationship problems.

"They had been having bitter problems for years and I guess he just went in there and started shooting," Sosa said.

Dekraai was seeking full custody of the couple's son but a court-ordered review recommended against that, John Cate Jr., the attorney for Michelle Dekraai, told the Orange County Register.

Dekraai appeared for a court hearing in the case on Tuesday but it was merely a scheduling meeting, Cate said.

"Obviously, I saw no indication" that he was violent, the attorney said.

Kari Salveson of Los Alamitos, who attended a service for the victims at SeaCoast Grace Church in Seal Beach, said she had known Michelle Dekraai for more than 10 years.

She said Michelle Dekraai made her every visit to the salon special.

"She could gab away. She was one of those girlfriends you could never get enough of. She made you smile and she made you laugh," Salveson said.

In Huntington Beach, people were shocked to learn that one of the friendliest men in the neighborhood had been arrested for the shootings.

Dekraai's neighbors described him as an outgoing man who invited them over for pool parties at the house he'd lived in for about six years. They said he doted on his son, playing catch with the boy in his yard.

Neighbors said they were aware Dekraai was in a custody battle with his ex-wife over their son, who neighbors said is 7 or 8 years old.

"It was a very difficult battle and he was trying to get more time" with his son, said Jo Cornhall, who lives across the street from Dekraai.

Next-door neighbor Stephanie Malchow, 29, said she was shocked when she saw the photo of the stocky man with thinning hair being detained by Seal Beach police.

"I'm like, no, not this neighbor, no way, he's the nicest guy ever," Malchow said.

Dekraai married his current wife two or three years ago in his backyard, said Malchow, who attended the wedding.

"He seemed very happy, he was just so happy he found someone new who loved his son," she said.

Dekraai walked with a limp after a tug boat accident that killed a fellow tug boat operator about two miles off the coast in 2007. Cornhall said he uses a brace for his leg.

Seal Beach has seen just one other homicide in the past four years, and Bowles said Wednesday's killings were the greatest tragedy to ever strike the seaside town.

The downtown is dotted with salons, restaurants, antique shops and boutiques clustered just blocks from a beach and pier popular with teenagers and young families. Many residents live and work within walking distance of the ocean and many businesses cater to Leisure World, a gated retirement community a few miles away that is home to 9,000 people.

"It's like Mayberry in the middle of Los Angeles," said Doyle Surratt, lead pastor of SeaCoast Grace Church. "We're small and all the kids go to school together."