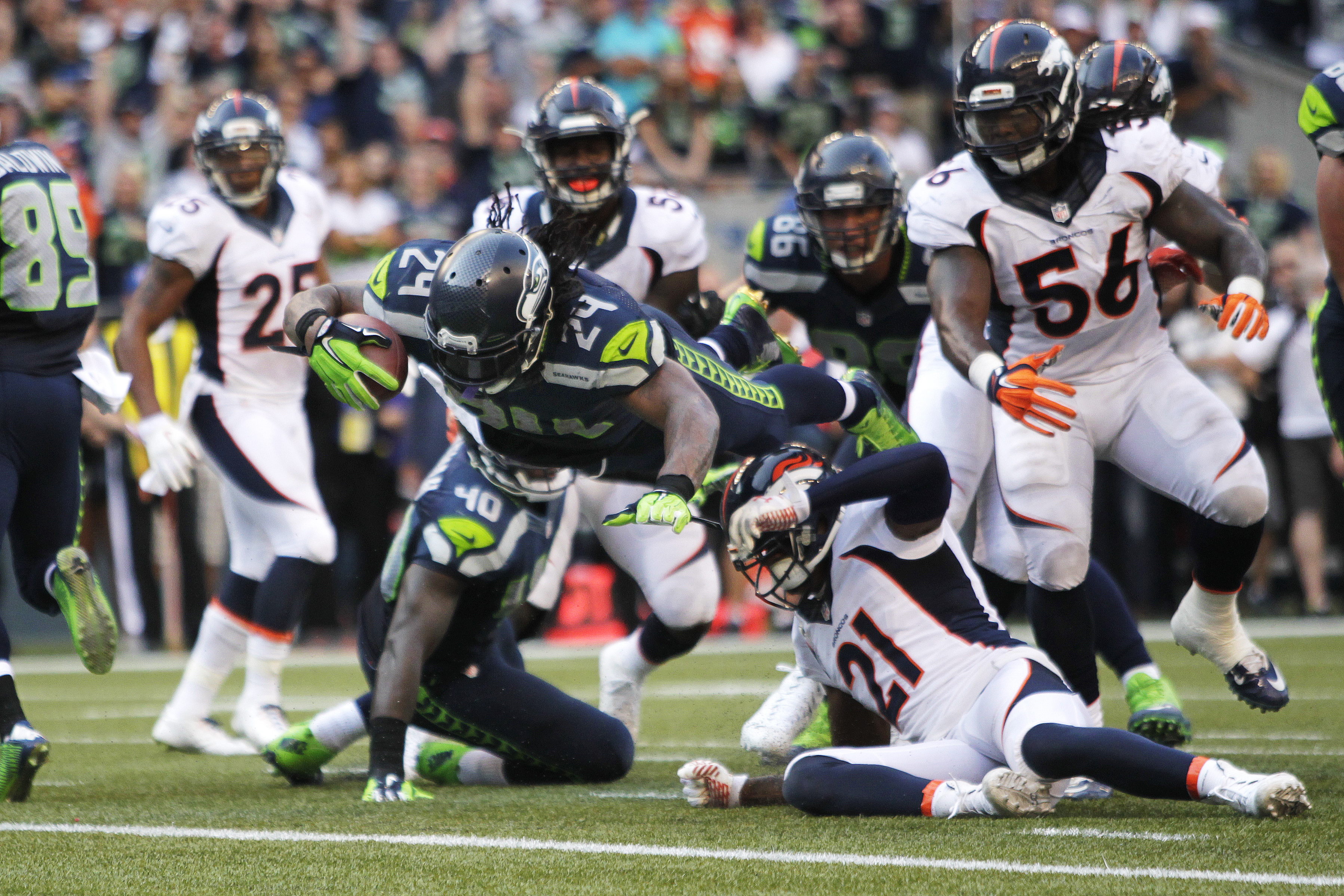 SEATTLE - Marshawn Lynch scored on a 6-yard run on the first possession of overtime as the Seattle Seahawks beat the Denver Broncos 26-20 in the NFL on Sunday in a Super Bowl rematch that lived up to expectations.

Seattle blew a 17-3 fourth-quarter lead, watching Denver tie it at 20 on Peyton Manning's 26-yard touchdown pass to Jacob Tamme with 18 seconds left in regulation and his 2-point conversion pass to Demaryius Thomas.

But Manning never saw the ball in overtime, thanks to Seattle quarterback Russell Wilson. After nearly getting sacked for a safety and throwing an interception in the fourth quarter, Wilson was brilliant in overtime, rushing for 21 yards and connecting on 4 of 6 passes. Lynch went the final 6 yards.

Manning led the rally for Denver, helped by a number of Seahawks mistakes. He was 31 of 49 for 303 yards and two touchdowns, but also threw a costly fourth-quarter interception.

Wilson finished 24 of 34 for 258 yards and two touchdown passes, both late in the first half. Lynch had 88 yards rushing and also caught a 5-yard TD pass.

PHILADELPHIA - Rookie Jordan Matthews, the receiver who replaced DeSean Jackson in Philadelphia, caught two touchdown passes as the Eagles beat Jackson and his Washington Redskins in a nasty game marred by a fourth-quarter brawl.

Jackson had his own big play, an 81-yard TD that tied it at 27. But it was not enough to offset Matthews and Jeremy Maclin, whose 27-yard scoring reception gave Philadelphia the lead. Rookie Cody Parkey's third field goal, a 51-yarder with 5:55 remaining, put the game out of reach.

The game was slowed by several injuries and disrupted by a sideline brawl with about 10 minutes remaining after Eagles quarterback Nick Foles was blindsided by Chris Baker during an apparent interception return by Bashaud Breeland. Baker and Philly left tackle Jason Peters were ejected.

ST. LOUIS - Terrance Williams scored the go-ahead touchdown late in the fourth quarter and Bruce Carter returned an interception 25 yards for a TD on the next snap as the Dallas Cowboys matched the largest comeback in team history to stun the St. Louis Rams.

DeMarco Murray's 1-yard run late in the first half began the rally for Dallas, which trailed 21-0. Dez Bryant caught a 68-yard scoring pass in the third quarter, and Carter's first career interception and touchdown came not long after he was evaluated for concussion-like symptoms on the bench.

Janoris Jenkins' 25-yard interception return, the fifth defensive touchdown in his three seasons, put the Rams up 21-0 with 6:06 to go in the first half.

CLEVELAND - With the Ray Rice domestic violence case lingering over them, the Ravens pulled off a comeback win as Justin Tucker kicked a 32-yard field as time expired to give Baltimore a victory over the Cleveland Browns.

Tucker's boot capped another challenging week for the Ravens, who continue to be dogged by their handling of Rice's suspension.

Following the game, Baltimore coach John Harbaugh addressed an ESPN report that claims he wanted the team to immediately release Rice after he was arrested for punching his then-fiancee. The report says Harbaugh was overruled by owner Steve Bisciotti and general manager Ozzie Newsome. "I can tell you this, we work together in our organization," Harbaugh said.

Joe Flacco set up Tucker's winner with a 32-yard pass to Steve Smith with 1:28 left. The Ravens then ran the clock down before bringing in Tucker, who split the uprights and sent the Browns to another tough loss.

Along with the blown opportunities, the Browns had a fake play in which backup quarterback Johnny Manziel fooled Baltimore's defense negated by a penalty.

JACKSONVILLE, Florida - Andrew Luck threw four touchdown passes - three of them in a lopsided first half - as Indianapolis dominated Jacksonville for its first win.

It was a home opener to forget for the Jaguars, who trailed 30-0 at the break and benched quarterback Chad Henne.

The only positive for Jacksonville was getting rookie Blake Bortles on the field. The third overall pick in May's NFL draft played the entire second half, finishing with two touchdown passes and two interceptions. He completed 14 of 24 passes for 223 yards, including fourth-quarter scores to Allen Hurns and Cecil Shorts III.

Indianapolis made plays from start to finish, including Greg Toler returning an interception 47 yards for a touchdown with 2:58 to play. Luck did most of the damage, though. He completed 31 of 39 passes for 370 yards.

NEW ORLEANS - Drew Brees passed for 293 yards and two touchdowns as the New Orleans Saints won for the first time this season, taking their home opener against Minnesota.

For the Vikings, the loss capped a week of distractions as the club first announced that star running back Adrian Peterson would play, then later changed course and said Peterson would leave the team indefinitely to deal with child abuse allegations.

Minnesota then lost starting quarterback Matt Cassel with a toe injury early in the second quarter. He was replaced by rookie Teddy Bridgewater, who completed 12 of 20 for 150 yards while leading two scoring drives that both ended with field goals.

Brees' scoring passes went for 34 yards to tight end Josh Hill and 18 yards to receiver Marques Colston. It was the 64th time Brees and Colston connected for a score. Only six other quarterback-receiver tandems have combined for more in NFL history.

Royal scored on 3- and 5-yard receptions and finished with four catches 42 yards. Malcom Floyd had two catches for 98 yards in a game the Chargers never trailed. Rivers finished 18 of 25 for 256 yards and extended his touchdown streak to 23 games to match the team record he set over the 2009-10 seasons.

San Diego beat Buffalo despite a depleted offensive backfield. Already missing starting running back Ryan Mathews (right knee), the Chargers lost backup Danny Woodhead to a right ankle injury. Woodhead did not return after being carted off following a 1-yard run 3½ minutes in.

Fred Jackson scored on an 11-yard catch and run for Buffalo, which blew an opportunity to get off to a 3-0 start for only the third time since 1993.

The victory not only put some life back into the Giants after two disappointing losses, it also ended any chance of a second straight horrible start for Tom Coughlin's team which opened 0-6 last season.

Victor Cruz made a 26-yard touchdown catch, his first since Game 4 of last season. The defense intercepted three of Ryan Fitzpatrick's passes, and the special teams blocked a punt, setting up Manning's second TD.

Fitzpatrick threw a 44-yard scoring pass to Damaris Johnson and ran for another score for the Texans, who played without halfback Arian Foster (hamstring).

CINCINNATI - Andy Dalton caught a touchdown pass - the first Bengals quarterback to pull off that feat - and Cincinnati stayed undefeated with a victory over the Tennessee Titans.

The Bengals head into their bye week with their best start in eight years and a chance to get some of their many injured players healthy. They got a lot of big plays, a few breaks and plenty of help from a team dealing with the death of a long-time player.

A few hours before kickoff, the Titans learned that kicker Rob Bironas had died overnight in a car crash in Nashville. He'd been released in March after his ninth season with Tennessee.

On the final play of the first quarter, Dalton flipped the ball to receiver Mohamed Sanu, who ran to his right while the quarterback sneaked toward the other side of the field. Sanu stopped and threw a cross-field pass that hung in the air. Cornerback Blidi Wreh-Wilson had a chance to pick it off or level the quarterback, but Dalton made the catch and ran 18 yards, diving inside the pylon at the goal line to score. He was the first NFL quarterback to score on a catch since Kansas City's Tyler Thigpen in 2008.

The Patriots won their 12th home opener in 13 seasons, while the Raiders lost their 15th straight game on the East Coast. They were held to three field goals by Sebastian Janikowski.

Brady became the third quarterback with 150 regular-season wins behind Brett Favre (186) and Peyton Manning, who came into Sunday with 169. He is 57-5 in his last 62 home games, including the playoffs.

DETROIT - Don Carey returned a fumble 40 yards for a touchdown, and Detroit's defensive front stuffed Green Bay, leading the Lions over Aaron Rodgers and the Packers.

The Lions came in with a secondary unit decimated by injuries, but that didn't much matter with Rodgers under constant pressure. He was sacked twice and threw for only 162 yards, and Green Bay wasn't any better when running the ball.

Reggie Bush added a 26-yard scoring run in the fourth quarter for Detroit, which had never beaten Green Bay with Rodgers healthy for the whole game.

The Packers managed only 223 yards of offense and lost despite forcing three turnovers.

Detroit linebacker Stephen Tulloch left with a knee injury that appeared to occur as he was celebrating a sack.

Tommy Kelly blocked a field goal for the undefeated Cardinals, who outscored San Francisco 17-0 in the second half.

The 49ers mounted 80-yard touchdown drives the first two times they had the ball, then didn't score again, blowing a halftime lead for the second week in a row.

Smith led touchdown drives of 62, 76 and 66 yards in a span of four possessions as Kansas City took leads of 14-0 and 21-10. The Chiefs won for only the third time in their past 11 games, dating back to last season.

The Dolphins are off to another wobbly start for a team that hasn't won a postseason game since 2000.

Smith, who ranked 35th and last in the NFL in passing after two weeks, went 19 for 25 for 186 yards, with three of his incompletions dropped. He threw scoring passes of 11 and 4 yards to Joe McKnight, and 20 yards to Travis Kelce.

The Chiefs were without seven starters, including running back Jamaal Charles, who was inactive because of a high ankle sprain. Knile Davis, subbing for Charles, rushed for a career-high 132 yards on 32 carries, and he scored on a 21-yard run.

The Steelers had gone eight quarters without a touchdown before Roethlisberger's two scoring strikes in the third.

They were set up by Cam Newton's fumble and Bell's 81-yard run. Roethlisberger finished 22 of 30 for 196 yards, and Brown had 90 yards receiving on 10 catches to help the Steelers (2-1) snap Carolina's eight-game home winning streak.

LaGarrette Blount ran for 118 yards and the Steelers outrushed the Panthers 264-42. The Panthers were looking for their first 3-0 start since 2003 - the year they went to the Super Bowl.