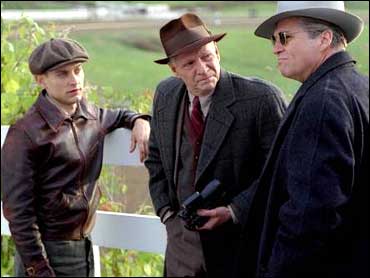 Jeff Bridges and Elizabeth Banks did their own riding in the film "Seabiscuit," which follows the story of the racehorse that became an unlikely symbol of hope in America during the Depression.
Critics are split on whether they made it to the finish line.

The film, based on Laura Hillenbrand's best-selling book, "Seabiscuit: An American Legend," opens in theaters Friday.

Bridges, stopped by The Early Show to discuss the movie, "Seabiscuit" with co-anchor Hannah Storm.

Bridges, who owns horses at his home in Montana, says he liked the story of "Seabiscuit" a lot. His character was one of the wealthiest men in America and owned the most car dealerships west of the Mississippi.

About his career, he says, "Some of my choices are a little unusual and don't always match what the general public likes. But this one, I loved, and I think most people will like it."

He adds, "It's interesting coming out in the summer when there's a lot of special effects movies, violence and all those things. This movie, there really are no special effects. The effect here is human emotion, which, for my money, that's what gets me most excited."

Hillenbrand gave Bridges a wallet that once belonged to Howard, and he carried it in his pocket during filming.

"(The movie) takes you on a ride but it puts you right in the saddle next to those jockeys," Bridges said this week. "It's a wonderful journey."

According to The New York Times, the movie never quite sweeps the viewer into "the boisterous, democratic world of which Seabiscuit, in Ms. Hillenbrand's account, was the plucky, galloping embodiment."

The Los Angeles Times, says the movie makes an "honorable effort" at meeting the challenge of living up to Hillenbrand's book and the PBS documentary. The review says it will be more favorable to newcomers who have not experienced either of the two.

Roger Ebert of The Chicago Sun-Times disagrees slightly, saying the movie will "satisfy" both those who have read the book and those who have not. Ebert also adds that the movie's races are thrilling and writer-director Gary Ross and his cinematographer, John Schwartzman, get amazingly close to the action.

The Early Show entertainment contributor Laurie Hibberd sat down with Maguire at the Santa Anita racetrack, where much of the movie was filmed.

In order to prepare for his role Maguire had to drastically change his appearance by losing weight and dying his hair.

Besides the weight, Maguire's other hurdle in the film was learning to ride like a real jockey. It was something he took very seriously.

"I worked with Chris McCarron, who's a recently retired Hall of Fame jockey, and we worked out at my house," he says. "I had this thing called the equicizer, which is a mechanical horse that the jockeys use to work out or rehabilitate."

No matter how good Maguire was on the equicizer, riding a horse was a different experience.

"The equicizer is stable in the feet," he explains. "The thing is rocking a little bit, but its nothing like getting on a 1,200-pound animal who, you know, at full stride can go 45 miles per hour. That's a whole different ball game."