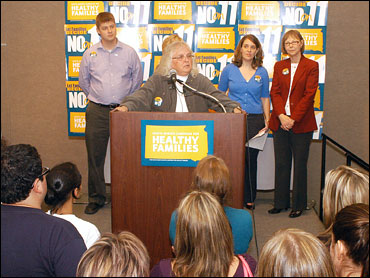 Voters across the country voted on variety of state ballot measures, including state Constitution amendments to ban gay marriage and restrictions on abortion.

CBS News projects that voters in South Dakota voted down Measure 11, which would have prohibited abortions except in cases where the mother's life or health is at a substantial and irreversible risk, and in cases of reported rape and incest. If it had passed, it would likely have triggered a legal challenge which could have lead to the U.S. Supreme Court and a reconsideration of the 1973 Roe v. Wade ruling that established the right to abortion.

In Colorado, CBS News projects that voters rejected Amendment 48, which would have defined the term "person" to include any human being from the moment of fertilization.

And in California, voters are deciding on Proposition 4, which would require a waiting period of 48 hours after parental notification before allowing a minor to terminate a pregnancy.

One of the most high-profile ballot initiatives is California's Proposition 8, which would eliminate the right of same-sex couples under the state constitution to marry, and would provide that only marriage between a man and a woman is valid or recognized in California. Similar measures have prevailed previously in 27 states, but none were in California's situation - with thousands of gay couples already married in the aftermath of a state Supreme Court ruling in May.

Similar ballot measures were up for vote in Arizona and Florida. CBS News projects that Arizona voters have passed the gay marriage ban.

Reporting on California's Proposition 8, Barbara Simon, Executive Producer of CBS News on LOGO, says polls have gone back and forth with extremely slim margins, and right now, the number on 8's side is leading by three points, according to a poll from our CBS station KPIX-TV in San Francisco. The margin of error is 4.

Colorado voters are deciding on Amendment 46, which would prohibit discrimination by the state or granting preferential treatment to any individual or group on the basis of race, sex, color, ethnicity, or national origin in the operation of public employment, public education, or public contracting. According to a poll taken in late October by CBS station KCNC in Denver and the Rocky Mountain News, 53 percent of registered voters in Colorado support the amendment.

CBS News projects that Nebraska voters are going to pass Measure 424, which is a constitutional amendment which bans affirmative action, by prohibiting the state from discriminating against, or granting preferential treatment to any individual or group on the basis of race, sex, color, ethnicity, or national origin in public employment, public education or public contracting, although there would exceptions for certain federal programs.

In Massachusetts, voters had to decide on a ballot measure eliminating the state's income tax. Question One proposed eliminating the 5.3 percent income tax by January 2010. According to projections, the ballot question was not passed.