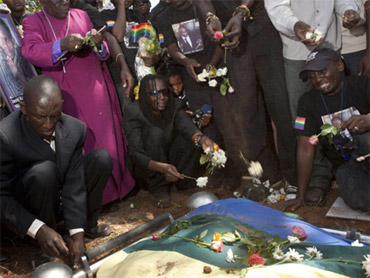 KAMPALA, Uganda - An anti-gay protester created a commotion at the funeral Friday for a prominent activist slain in Uganda, yelling out homophobic phrases that led to a scuffle with mourners attending the burial.

Hundreds of people attended the services for David Kato, who was bludgeoned to death earlier this week at his home in Uganda's capital.

Police had to intervene after a homophobic outburst from Anglican priest Thomas Musoke led to a scuffle midway through Friday's funeral, and Musoke was escorted away.

According to Reuters, the pastor condemned homosexuality, saying: "The world has gone crazy … People are turning away from the scriptures. They should turn back, they should abandon what they are doing. You cannot start admiring a fellow man."

Reuters reports that gay activists stormed the pulpit and grabbed Musoke's microphone as he shouted: "It is ungodly!"

While no one was hurt in the melee, gay rights campaigners said they had received threats that their cars would be stoned as they left the service.

Kato's killing comes after a year of stepped up threats against gays in Uganda, where a bill has proposed the death penalty for some homosexual acts.

However, Ugandan authorities say his sexual orientation had nothing to do with his death, and that he was slain by robbers. In a statement earlier this week, police said they had arrested one suspect and were looking for another.

But gay rights campaigners at the funeral insisted that Kato's death was linked to his activism and that the government had failed to protect gays in the country.

"What happened disgraced this nation and disgraced the soul of the person who had died," activist Julian Pepe Onziema said.

According to Reuters, the murder became one of the top 10 topics on the social media website Twitter on Thursday.

"I am deeply saddened to learn of the murder," Obama said in a statement Friday. "David showed tremendous courage in speaking out against hate. He was a powerful advocate for fairness and freedom."

Kato, who had been threatened multiple times, was found with serious wounds to his head caused by an attack with a hammer at his home late Wednesday. He died on the way to the hospital.

A Ugandan tabloid newspaper called Rolling Stone had listed a number of men they said were homosexuals last year, including Kato. Kato's picture was published on the front page, along with his name and a headline that said "Hang Them."

Kato and two other gay activists sued Rolling Stone over claims that it had violated their constitutional rights to privacy and won the case earlier this month. A judge issued an injunction banning the publication of the identities and personal details of alleged homosexuals.

Homosexuality is illegal in Uganda and gay men and women face regular harassment. A controversial bill introduced in 2009 and still before the country's parliament would see the death penalty introduced for certain homosexual acts. The bill prompted international condemnation and hasn't come up for a vote.

Its introduction followed a conference in Kampala that was attended by American activists who consider same-gender relationships sinful. The U.S. evangelicals believe gays and lesbians can become heterosexual through prayer and counseling. Some gay Ugandans still resent that American intervention.

In the wake of Kato's murder, fellow activists said they would continue campaigning despite fears for their safety.

"We can't lose David just like this," said activist Sandra Ntebi. "We are more determined because he is not around and we will do whatever it takes."