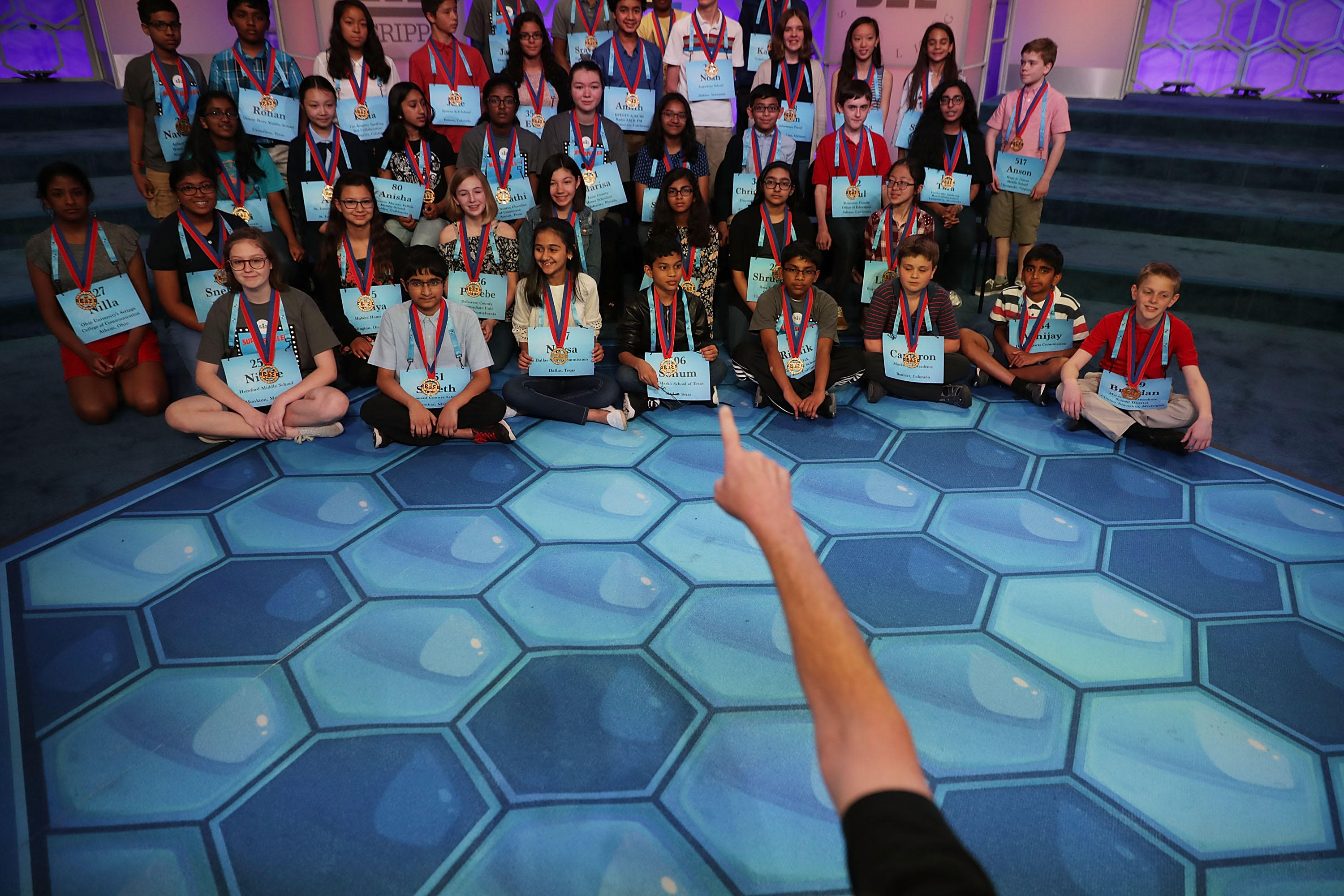 OXON HILL, Md. -- Forty-one spellers have advanced to the finals of the Scripps National Spelling Bee out of a field of 516, by far the biggest in the 93-year history of the competition. The finalists were announced Wednesday after two days of onstage spelling during which nearly 200 spellers were eliminated for getting words wrong.

Scores on a written spelling and vocabulary test determined who advanced to the finals.

There were no perfect scores on the test. Bee executive director Paige Kimble says, "We thought it was an easy test. We were wrong."

Shruthika already came into the bee as one of the favorites, having finished in seventh place last year.

The past 13 champions and 18 of the last 22 have been Indian-American.

The Twitter account for the Spelling Bee competition showed the finalists and included details on how to watch the competition Thursday:

But this year, the bee nearly doubled in size thanks to a new wild-card program, and Bailly knew he could wreck his voice if he didn't take some breaks over three full days of spelling.

"I could run myself into the ground doing this, because I just love doing it," Bailly said. "I don't really want to take a break, but ... I've got to do some pacing."

That meant Sietsema, the bee's longtime associate pronouncer, handled Bailly's duties Wednesday for two of the five groups of spellers -- about 180 kids total.

"It was very exciting," Sietsema said. "It was a thrill."

Sietsema, a Greek Orthodox priest from Lansing, Michigan, cuts a striking figure among bee officials with his dark suit and white collar. Despite his religious vocation, he has a resume that suits the bee. A former linguistics professor, he worked for years as the pronunciation editor for Merriam-Webster.

Like Bailly, a classics professor and a former Scripps bee champion, Sietsema derives tremendous satisfaction from working with young spellers.

"It's wonderful to be part of a program that rewards young people who focus on scholastic and educational endeavors," Sietsema said. "To see their enthusiasm about literacy, about linguistics, just feeds my soul in a way that I can't quite describe."

More than 500 spellers tested their skill in front of Bailly and Sietsema over two days of preliminary rounds, and nearly 200 misspelled words onstage. The 41 semifinalists were determined by results of a written spelling and vocabulary test.

One of the top scorers was 12-year-old Shruthika Padhy of Cherry Hill, New Jersey, who finished seventh in last year's bee and is considered one of the favorites this year. But even she got a few answers wrong.

"We thought it was an easy test," bee director Paige Kimble said. "We were wrong."

Here are some other stories from spellers at this year's bee:

The 13-year-old from Polo, Illinois, is certainly an accomplished speller. She's competing for the fourth time, although she's never made the finals.

That may be because she also competes in tumbling, volleyball, soccer, softball, basketball, cheerleading and track and field. Next month she'll be at the U.S. Trampoline and Tumbling Association national championships.

"I don't have a lot of free time," Rebekah said.

Rebekah got some of the loudest cheers in the preliminary rounds, mostly from a crew of fellow veteran spellers.

Rebekah had never gotten past the second round of onstage spelling, known as Round 3, because a written test constitutes the first round. But she spelled "yarrow" correctly and achieved her goal for the week, adding, "I was really nervous and dreading it all week."

Reagan Remmers of Missoula, Montana, was heading out to lunch with her mom after she misspelled "balaclava."

Or so she thought.

"My mom got a phone call that told her I was reinstated," Reagan said. "I was like, 'Oh, sweet!'"

Turns out, the spelling Reagan gave - "Balaklava" - is a city in Ukraine. Since the judges didn't warn her that her word had a homonym and because Reagan didn't ask for the definition - a garment covering the head and neck except for parts of the face - her spelling was deemed correct after further review.

"I had no idea what the word meant," Reagan said.

Still, her spelling wasn't a complete guess. She asked for the language of origin and was told it was Crimean, which led her to include a "k'' instead of a "c."

This was just the fifth time in 20 years that a speller was reinstated after judges had determined he or she misspelled a word, Kimble said.

Considering how far he had to travel to get to the bee, Daniel Doudna can be forgiven for taking his time at the microphone.

Daniel lives in Fairbanks, Alaska, one of three spellers from the state. But the 4,100-mile trip to Washington is nothing new for the 14-year-old: This is his second time in the bee, and two of his older sisters also competed.

When Daniel starts spelling, he's more deliberate than most, pausing after each letter and letting silence hang in the air. His word on Wednesday was "quietude," and he created some.

"I made too many mistakes by going fast," he said. "After each letter, I mentally review the word to see what the next letter is."