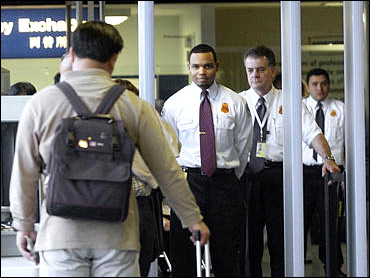 One screener had four Social Security numbers and a conviction for shoplifting, and as seen on a surveillance videotape exclusively obtained by CBS News, he used his position to steal jewelry and more from airline passengers' bags. WCBS's Cheryl Fiandaca reports for The Early Show.

Transportation Security Administration screener Clarence Henry is supposed to be looking for bombs in checked luggage. Instead, he's looking for jewelry and cash. A surveillance video appears to show Henry carefully picking through the jewelry case in a bag - looking for expensive pieces and pocketing them when he finds them.

And Henry isn't the only federal employee accused of stealing from passengers. Last week, police arrested three more screeners for stealing and, through search warrants, uncovered a treasure trove of stolen property including video recorders, cameras, laptops and large amounts of cash and jewelry.

Queens D.A. Richard Brown says, "What is especially troubling about this case is that individuals charged with the responsibility of ensuring the safety and security of our nation's airlines would be pilfering from the traveling public rather than carrying out their responsibilities."

And these recent arrests are not the first time screeners have been accused of stealing from passengers. Bob Rodriguez, who is legally blind, says he became a victim at a security checkpoint last February.

Rodriguez says, "I didn't realize until I got to the other end of that when I looked at my wallet, my wallet was OK, but I had $200 missing."

Rodriguez filed a report but because he's blind, he wasn't able to identify the screener he says stole his money.

Over the past several months, CBS News obtained dozens of police reports involving screeners stealing from passengers, including some very high-profile passengers. Sources say the victims include Susan Lucci, Joan Rivers and Chevy Chase, who had his $10,000 Cartier watch stolen from his bag.

More than two years after the TSA was created, it still has not completed background checks on many of the screeners already working at airports. Sources say if it had, it may have noticed Henry had four Social Security numbers and a criminal conviction for shoplifting.

The TSA said the background checks only disqualify felons, not those convicted of minor crimes, even if those minor crimes involve stealing. In a statement the agency said it "has a zero tolerance for theft and aggressively investigates all allegations of misconduct and when infractions are discovered the offenders are removed from service."

In the meantime, 51-year-old Henry and the three other screeners have been removed from service, not by the TSA, but by the police.

Sources say the investigation into TSA screeners is continuing. Police are also looking into the possibility that some of the screeners were working together as an organized group of thieves.