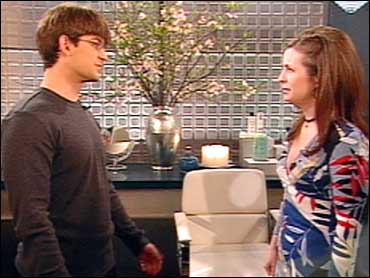 Emmy award winning actress, Martha Byrne, who has has been portraying Lily on "As the World Turns" since she was 15, knows the importance of a screen test.

"I was screen tested and I did not get the job the first time," Byrne said on The Early Show. "And there was a change in the regime and our executive producer watched the old tape and hired me on the spot. These screen tests are very important."

Byrne helped with auditions as The Early Show entered the second day of a week-long search for the next soap star to appear on "As The World Turns." Each day, two hopefuls will screen test with a regular from the hit CBS daytime drama.

On Tuesday, Ben Parker and Megan Gunning got to perform with Byrne. Parker and Gunning were selected from a group of actors who had previously appeared on "As The World Turns." They were discovered when the show visited ten college campuses this past fall.

Visit our INTERACTIVE to find out all about the soap star hopefuls, the actual stars and read the scripts. Most importantly, watch their performances and compare them. You get to vote Friday for your favorite performer. The male and female receiving the highest votes will debut in their new roles this summer on "As The World Turns."

On the TV drama, Byrne plays twins, the very sweet and loving Lily and the troubled Rose.

"Both have issues. But very different issues," Byrne said about her characters. "Rose is this Atlantic City showgirl who has a lot of drama in her life and loves it very much. Lily follows the drama and loves it, craves it. She's quiet now, Llily. She's got her kids at home. Rose is having more problems."

She is being having fun portraying both characters. "I love them both for different reasons," she said. " Rose, I can get kind of the campiness out and fun part."

"Lily is actually a harder character to play. She's been through so much. How can you reinvent that every time you do scenes?"

Her advice to Parker and Gunning? "Have a good time. Have fun. Acting is supposed to be fun. Try different things and explore and feel these great emotions. You know, you always have - we don't do take two today. In real life, we have other chances," she said.

Wednesday, two more contestants screen test for their chance at stardom. Joining them will be Terri Colombino, who plays Katie on the daytime drama.