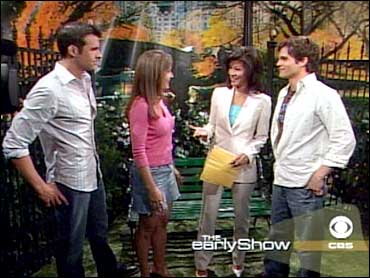 With the help of "The Young and the Restless" regular, Greg Rikaart, day two of The Early Show "Soap Star Screen Tests," continues with live performances by college students Brandon Smith and Joanna Howard.

Rikaart just completed his first full year on the show as the character Kevin Fisher. You may also recognize him from "Dawson's Creek." He notes, "I worked in North Carolina, got a little fan base there. I was fortunate to have that because that led to my job at "Y&R."

He was initially contracted for only 10 episodes. And now he hopes the same will happen to the students competing for a role on the big daytime drama.

He says, "I certainly hope so. We have really talented kids here this week." Rikaart was on the road for the on-campus auditions. He went to SMU in Dallas and UNC in Chapel Hill.

First to audition was Smith, a drama graduate student from The University of North Carolina. Smith has his bachelor's degree in theater from Midwestern State University in Wichita Falls, Texas. He has been acting his whole life; the earliest evidence is a videotaped performance of him in preschool doing "The Three Bears."

Next was Howard, a sophomore theater major from The University of Maryland. Howard has also been acting since an early age. At 8, she was part of the national tour for "Les Miserables." Originally from West Hampton, N.Y., Howard plans to return to New York upon graduation to resume her career.

"They did well," a very pleased Rikaart said after Smith and Howard's auditions. "I might be out of a job soon."

Well, whether they get the job on "Y&R" or not, is up to you, Early Show viewers. On Friday, you can cast your vote after the end of the show. Voting continues from 9:00 a.m. Friday to midnight on Saturday /ET.

To get to know the soap star hopefuls, review their school tryouts and live screen tests, and check out their scripts, click on the interactive at right.