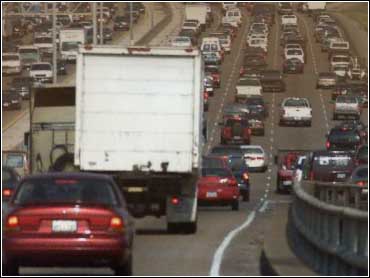 The Supreme Court hears arguments this week in a case that could determine whether the Bush administration must change course in how it deals with the threat of global warming.

A dozen states, including Rhode Island, as well as environmental groups and large cities are trying to convince the court that the Environmental Protection Agency must regulate, as a matter of public health, the amount of carbon dioxide that comes from vehicles.

Carbon dioxide is produced when fossil fuels such as oil and natural gas are burned. It is the principal "greenhouse" gas that many scientists believe is flowing into the atmosphere at an unprecedented rate, leading to a warming of the earth and widespread ecological changes. One way to reduce those emissions is to have cleaner-burning cars.

The Bush administration intends to argue before the court on Wednesday that the EPA lacks the power under the Clean Air Act to regulate carbon dioxide as a pollutant. The agency contends that even if it did have such authority, it would have discretion under the law on how to address the problem without imposing emissions controls.

The states, led by Massachusetts, and more than a dozen environmental groups insist the 1970 law makes clear that carbon dioxide is a pollutant — much like lead and smog-causing chemicals that is subject to regulation because its poses a threat to public health.

A sharply divided federal appeals court ruled in favor of the government in 2005. But last June, the Supreme Court decided to take up the case, plunging for the first time into the politically charged debate over global warming. The ruling next year is expected to be one of the court's most important ever involving the environment.

"Global warming is the most pressing environmental issue of our time and the decision by the court on this case will make a deep and lasting impact for generations to come," says Massachusetts' attorney general, Thomas Reilly.

David Bookbinder, a lawyer for the Sierra Club, says a legal clarification of the EPA's authority could determine whether the current administration must regulate carbon dioxide emissions and whether a future one will be able to demand such limits.

At issue for now is pollution from automobiles. But the ruling indirectly may affect how the agency deals with carbon dioxide that comes from electric power plants.

In a separate lawsuit, the EPA says the Clean Air Act also prevents it from regulating such emissions from those plants. That claim would be undercut, Bookbinder says, if the high court rules in the states' favor in the auto emissions case.

President Bush has rejected calls to regulate carbon dioxide. He favors voluntary steps by industry and development of new technologies to reduce the amount of greenhouse gases released into the atmosphere.

"We still have very strong reservations about an overarching, one-size-fits-all mandate about carbon," James Connaughton, chairman of the White House Council on Environmental Quality, recently told a group of reporters.

The administration says in court papers the EPA should not be required to "embark on the extraordinarily complex and scientifically uncertain task of addressing the global issue of greenhouse gas emissions" when other ways are available to tackle climate change.

The United States accounts for about one-quarter of the world's greenhouse gas emissions. The amount of carbon dioxide from U.S. motor vehicles, power plants and other industry has increased on average by about 1 percent a year since 1990.

Now that Democrats will control the House and Senate in January after their election victories this month, there is expected to be increased pressure in Congress for mandatory limits on carbon emissions.

The election results "have signaled a need to change direction" on dealing with global warming, three Democratic senators who will play leading roles on environmental issues recently wrote the president.

But whether there is such a shift actually may depend, in the end, on the Supreme Court.

Plaintiffs in the suit are California, Connecticut, Illinois, Maine, Massachusetts, New Jersey, New Mexico, New York, Oregon, Rhode Island, Vermont and Washington. They were joined by cities such as Baltimore, New York and the District of Columbia; the Pacific island of America Samoa; the Sierra Club; the Union of Concerned Scientists; Greenpeace; and Friends of the Earth.