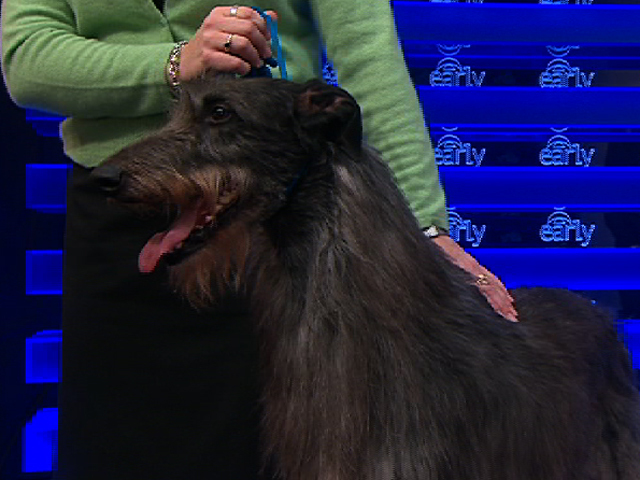 (CBS) On Tuesday night, the Westminster Kennel Club Dog Show narrowed down the field of 2,500 competitors to just one.

Hickory, a 5-year-old Scottish deerhound, was named "Best in Show."

Hickory and her handler, Angela Lloyd, appeared on On the "Early Show" Wednesday with David Frei, who has been host of the Westminster show for more than 20 years.

Lloyd said the honor was the biggest in her handling career.

Was she nervous on the night of the competition?

She said Hickory was confident from the beginning of the show.

Lloyd said, "She went in the ring last night. That was the best she had ever shown for me in the whole two-and-a-half years that I've shown her, and she owned it."

"Early Show" co-anchor Jeff Glor noted, "She's so composed. We've been hanging out with her a little bit this morning behind the scenes here and she hasn't made a peep, she's so well behaved. Especially with everything she's been through here."

But that's not the end of the fun for Hickory.

He explained, "She goes from here to a couple of other stops. Eventually we get to the observation deck at the Empire State Building, where all the great champions go. From there, to Sardi's (restaurant), where they serve her sliced steak on a silver platter. And eventually, we're going to end up at the Ronald McDonald house and visit some pediatric oncology patients."

As for Hickory's win, Frei said she stood out because she had all the winning traits.

"Any time you come down to the final lineup, you've got seven great dogs, so to win it, and she did this, you have to own the ground you stand over. Whether you call it charisma or personality or showmanship, she had it all."

Frei said he had his eye on Hickory in competitions for years.

"Well, I raised Afghan hounds, so I have a good eye for sight hounds, as she is," he said. "I knew she was a great dog when I saw her a couple of years ago when she was first starting out. Under Angela's wonderful hand, she's done great things. Won 14 best in shows, now 15. Ready to retire."

Glor noted the dog weighs 85 pounds. He added, "You know what I like about Hickory. She's a country girl."

Lloyd said, "She is a country girl. She likes to go home and run on the farm."